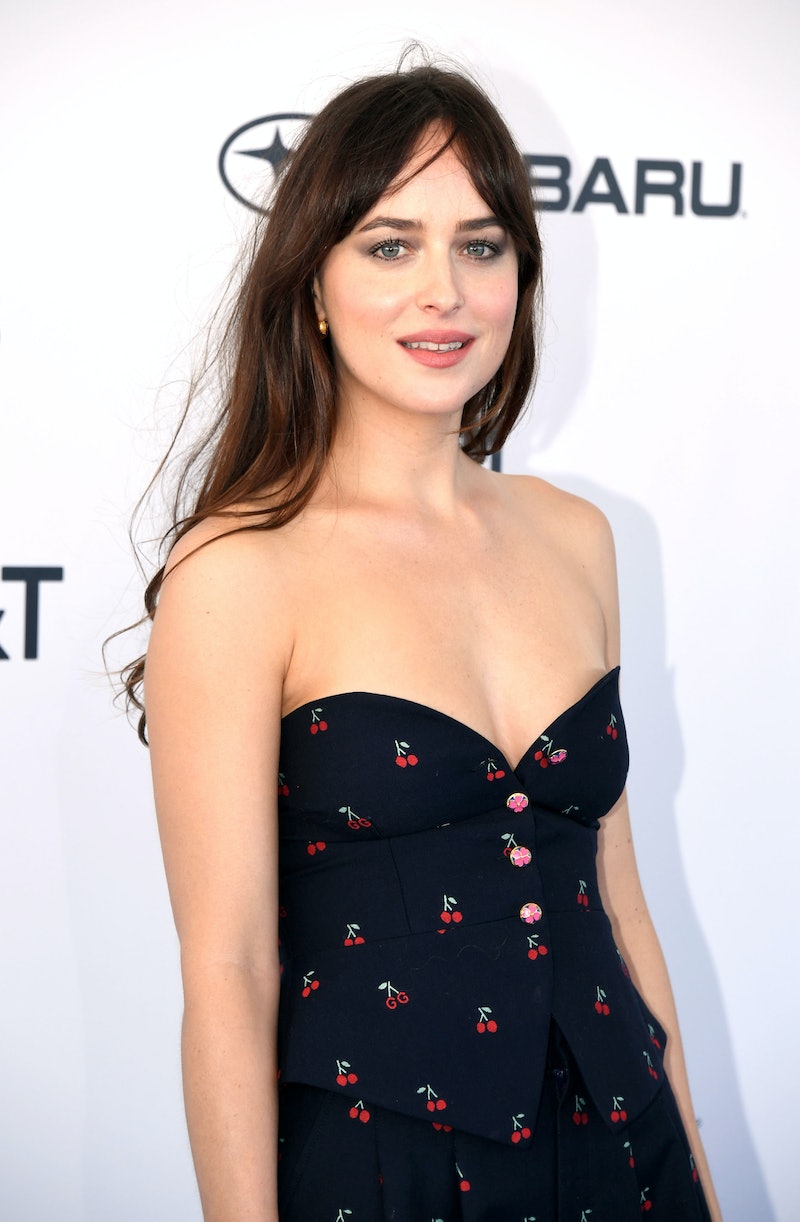 The new season is ushering in plenty of fresh trends fashion folks are dying to try — and if you're feeling a bit behind on the latest and greatest to take over the sartorial world, don't fret, there's lots of time to catch up on everything, especially now that fashion month has come to a close. So, set aside some time and Pinterest those that speak most to you. Currently, though, a revived, refreshed pistachio hue has been flooding the street-style scene, replacing the ever-popular slime-green shade people had opinions about; leather is poised to be the it material for autumn; and sharp suiting and logomania are still alive and well this time of year. Just take a look at Dakota Johnson's Versace blazer if you need further proof that the latter two trends are certainly not slowing down anytime soon.

Johnson has been serving up major looks nonstop this year, whether she's walking the red carpet of a major event, en route to a yoga class in L.A., or taking the stage to talk important causes. Standout style that's equal parts trend-forward, cool, and chic is the actor's M.O. — and that's exactly why the fashion-minded can't seem to stop replicating her getups the second they debut.

On Sept. 28, Johnson stepped out to attend the 2019 Global Citizen Festival in Central Park, where she took the stage to talk about the need to take action to end extreme poverty by 2030. She also spoke at the annual gathering last year, where she gave out her phone number mid-speech and encouraged fans to call her.

For this year's outing, Johnson took a surprisingly casual dressing approach that, as per usual, hit all three of her signature style marks: Her ensemble was trendy, cool, and chic, all at the same time. The hero piece in her getup was an oversized blazer, which she paired with a coordinating crop top that ever-so-slightly peeked through.

The pieces hailed from Versace's Resort 2020 collection and offered a bold take on the logomania trend: Both the top and blazer were printed with Gianni Versace's name, written in his own handwriting. How special is that?

Johnson styled the blazer and crop top pairing with mid-rise, wide-leg jeans from 7 For All Mankind — a celeb-favorite denim brand — and Gucci sandals that featured a bold, knotted vamp.

If you take just one thing away from Johnson's latest look, let it be the fact that the logo trend is still as strong as ever. Inspired to rock your favorite brand name now, too? Ahead, The Zoe Report's favorite logomania pieces on the Internet.