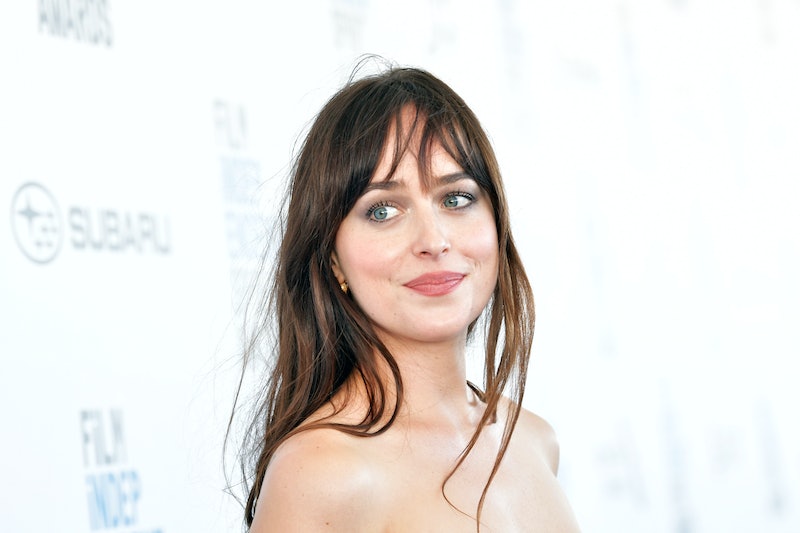 Dakota Johnson is making the rounds in New York City while promoting her latest film, The Peanut Butter Falcon, and she's laying out a range of noteworthy looks along the way. After stunning in a statement Alexandre Vauthier tulle-adorned cocktail dress at The Tonight Show Starring Jimmy Fallon, the actor reeled things in with a form-fitting tweed skirt suit for a visit to NBC's TODAY. Amidst the whirlwind press tour, the Fifty Shades of Grey star paused for fuel, and Dakota Johnson's black t-shirt dress and sneakers served as a stylish getup for a quick smoothie break between appearances.

Dressed in a lightweight, knee-length black tee and matching bike shorts, the 29-year-old avoided showers in Manhattan as she scurried to her vehicle in the monochromatic look. The breezy outfit was a far cry from the buttoned-up ensemble she'd warn hours earlier, but still delivered a sense of refined sophistication thanks to a sleek pair of Alexander McQueen sneakers. The smooth leather platform shoes have received a stamp of approval from tastemakers like Elle Fanning and Hailey Baldwin — and for good reason.

The sneaker's exaggerated white sole creates a chic dynamic alongside the buttery black leather, possessing a smart, sleek versatility with the power to elevate so many looks. Practically made to offset a less-is-more outfit such as Johnson's, the actor-approved footwear is a street style chameleon that's bound to become a go-to staple. With a good chunk of summer still remaining, you'll want to secure Johnson's relaxed outfit formula for boiling forecasts ahead.

Why fix what's not broken? This simple, crew-neck classic is what exceptional basics are all about.

The asymmetrical draped hem on this size-inclusive option is an unexpected detail to set your look apart.

Keep it classic with these structured low-top sneakers from Axel Arigato, then add an anklet for a playful twist.

Opt for an artsy moment with this graphic tee featuring Marilyn Monroe filming 1953's River of No Return.

Add a punk-inspired edge with these simple low-tops from Dr. Marten.

Put an avant garde spin on a basic look with this one-shouldered tee and its twist-knot back.

Finish the look with another designer platform option that will infuse your style with a dash of street-smart luxury.

Opt for color with this lime-green tie-dye option that's made for a scorching hot day.

Go the chunky route for a day on-the-go with this model-approved dad sneaker from Ash.