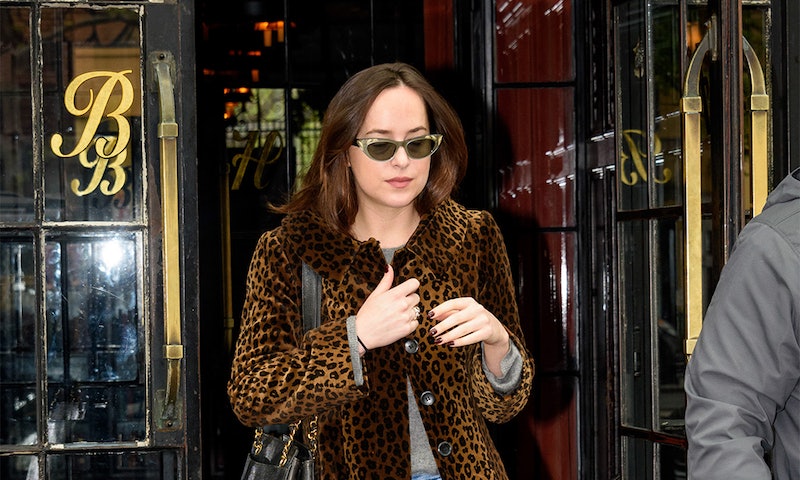 Have you ever found yourself standing in front of your closet, which, mind you, is filled-to-the-brim with clothing, and felt like you had nothing to wear? It's easy to get overwhelmed when it comes to piecing together your daily looks, which is why it's so important to curate a refined lineup of staples. If you're in search of a wardrobe that's equal parts classic and edgy, who better to look toward for a little inspiration than style maven Dakota Johnson?

One peek at some of the actor's best outfits to date and it's clear that Johnson has one of the most well-rounded closets amongst the celebrity set: It's chock-full of timeless, classic staples (read: blazers, jumpsuits, and dresses) that easily lend themselves to edgier ensembles, too. That means Johnson's cool-girl look is actually more achievable than you might think — all you need is a few pieces (and some Johnson-inspired styling tricks) to emulate the 29-year-old's signature look with ease.

Ahead, The Zoe Report breaks down the four wardrobe staples Johnson has donned time and time again, along with the best pieces on the market right now to recreate each look for yourself. Easy dressing is officially on the horizon.

Who doesn't love the ease of a jumpsuit? Johnson is certainly on board with the one-and-done outfit, having donned it back in Oct. for an appearance on Jimmy Kimmel Live! That time, the actor's sleek, black jumpsuit appeared more refined than edgy — namely due to the fact the she styled it with elegant black heels and minimal jewelry — but the one piece can easily ooze edge with the addition of an oversized moto jacket and studded ankle boots. Consider a simple black jumpsuit the perfect work-to-play piece to invest in now and wear season after season.

This '70s-inspired jumpsuit is the perfect wardrobe staple to buy now and wear nonstop. Dress it up with heels, a sparkly clutch, and statement-making jewels, or make it rock-concert ready by styling it with cool boots, a leather jacket, and a slicked-back ponytail.

When looking for the perfect black jumpsuit that can be both dressy and edgy, pick one with a slightly simpler design — you'll have more styling possibilities that way. This Vince version is sleek and simple without feeling too basic.

If you don't yet own a checked suit, allow this Johnson-approved look to convince you to invest. The best part about a plaid set is that it comes with so many styling possibilities. You can wear the pieces together — as Johnson did — for a more refined approach, or rock the staples separately if you want something a bit more casual.

To achieve the latter, swap the matching trousers for black skinnies, keeping the blazer as the top layer. Or, stick with the trousers and trade in the blazer for a leather jacket. Two pieces and a handful of outfit possibilities — what's more covetable than that?

Though even the sale price of this wool-blend blazer is on the pricier side, keep in mind it's a staple that will last you for seasons to come.

For a look that's all business, pair these checkered pants with the coordinating blazer. If you're looking for a more casual approach, swap the blazer for an oversized leather jacket.

This light-wash blazer is the perfect transitional piece — you can wear it through winter and into spring.

If trousers just aren't your thing, this skirt set may just be your calling card. Rock it on its own or pair it with the matching blazer — it's one versatile staple you can style in so many ways.

Just like an LBD, a simple white dress is a versatile wardrobe staple that can be worked into a slew of different looks. Johnson wore her lacy white frock to the Venice Film Festival back in Sept., pairing it with metallic heels, but it's easy to picture her donning the same piece in Los Angeles. Add in a denim jacket and cool, chunky kicks for a casual daytime look that's equal parts comfortable and edgy.

Mara Hoffman can do no wrong with her easy, breezy dresses that are also eco-friendly. This white number makes for the perfect canvas — you can build endless looks off of it.

It's never too soon to scoop up the most perfect white summer dress, and this one from Pixie Market definitely deserves a spot in your lineup.

This is one of the fiercest pieces in Johnson's closet, and though she was actually spotted in it back in 2017, it feels as relevant as ever today — the animal-print trend is showing no signs of slowing down, after all. While the bold pattern has been worked into just about everything, a leopard-print coat seems like the easiest, foolproof option you can wear for seasons to come.

Johnson isn't the only celebrity who loves this versatile yet edgy outerwear staple. Kate Moss and Alexa Chung have been spotted in the printed top layer, too. Buy it now, and rock it forever.

Looking to emulate Johnson's fierce style for less? Start with this leopard faux-fur coat that you can score at Mango for just $170.