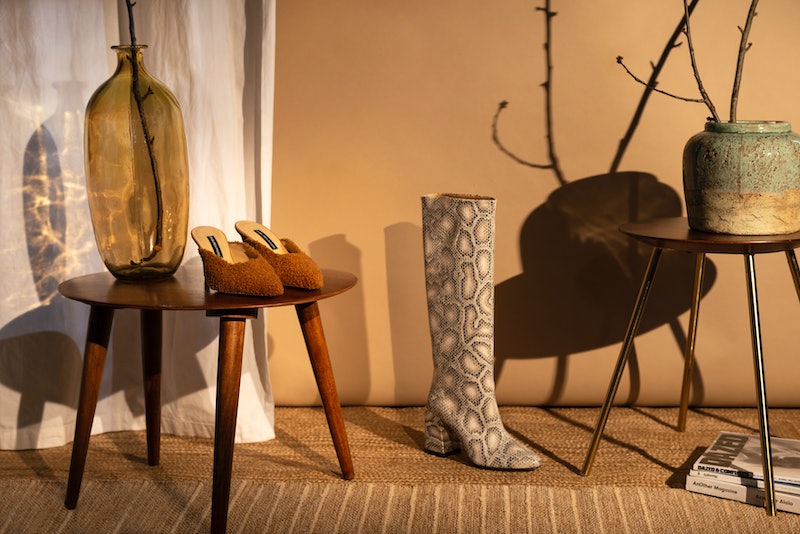 Eight years ago, when Theresa Ebagua first launched emerging footwear brand Chelsea Paris, things were undoubtably different. Though loved by It-girls from Beyonce to Kendall Jenner, Ebagua's designs, which draw aesthetic inspiration from her African roots, were met with resistance from buyers, investors and consultants. "I was repeatedly advised to conceal my heritage and race and to water down my designs, in order to appeal to a broader consumer base," Ebagua tells TZR. It's only in 2020, following the racial reckoning across the fashion industry, that Chelsea Paris' relaunch is being met with the recognition and visibility it's always deserved — and Ebagua is leaning into it.

"With this relaunch occurring at a time when we are having such important, open conversations about POC, I feel more grounded than ever in my identity as an African designer," Ebagua tells TZR. The relaunch, which arrived on Sep. 22, explores the geometric language of cornrows, which were an integral part of her Nigerian upbringing. "Growing up, my mom used to cornrow my hair, placing colorful beads on the ends," Ebagua said in the press release. This visual aesthetic lent itself seamlessly to the FINN sandals, which strings together strips of satin for an angular, woven look. This same DNA interpreted again through its textured ACE mule, which features raised bands that mimic the shape of cornrows.

Across the inaugural collection, there's scores of styles to choose from, with ankle booties for those leaning into the change in temperature, open-toed sandals for those wearing from seasonless locations. Ebagua's go-to pair has proven versatility: "My favorite is BO, in the royal python snake print. I really love mixing prints, so when I’m feeling quirky and fun, I pair the BO with a monochrome or grayscale print," she says. "While I’m out running errands, I wear it with jeans and a tucked in, oversized white button down."

During her time away from the drawing board, Ebagua grew as a designer and a business owner. "Over the years, I’ve certainly matured as a designer and refined my aesthetic but most importantly, I have learned what is essential to a successful brand and business," says Ebagua. "Rather than cater to the expectations of wholesalers, I have designed this collection for the consumer." The new Chelsea Paris is entirely self-funded and direct-to-consumer, as to ensure that it honors its shoppers and Ebagua's personal narrative unequivocally, without making compromises for wholesalers.

As for other young fashion designers who are driven by their own heritage, but are facing some resistance along the way, Ebagua has some insight: "I would advise them to be bold. To trust their instincts ... to consider their personal narrative and envision each silhouette as a blank canvas, waiting to express their culture."

To shop the all-new silhouettes, continue ahead: