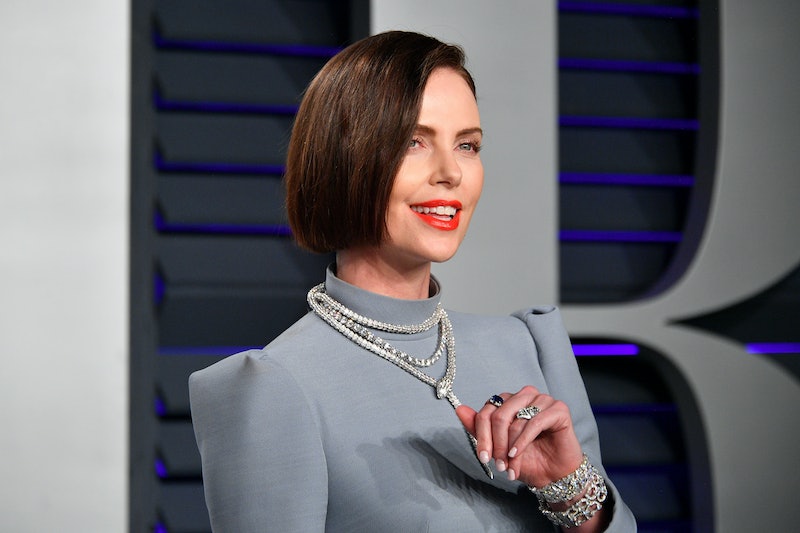 Charlize Theron has been on a major style and beauty streak as of late. The actor debuted what's perhaps the boldest haircut she's ever sported in her career (aka, a bowl chop that was inspired by iconic supermodel Linda Evangelista's choppy 'do in the '90s). While the daring cut may have been prompted by her return on-screen as Cipher in Fast & Furious 9, it's clear the 44-year-old has no problem rocking it IRL — and she found the perfect outfit pairing, too. Enter, Theron's black oxfords-and-trousers getup, which is menswear-inspired style at its finest.

Paris Fashion Week may be underway, and as such, all eyes are likely peeled on the street-style looks to debut in the City of Light — but that certainly doesn't mean you shouldn't stay abreast the getups to make an appearance in other cities, too, like in the Big Apple or in L.A. Plenty of A-listers have chosen to opt out of PFW (or may be attending only a few days), perhaps because business calls, which means the streets of the East and West Coast are chock-full of sartorial excellence right now.

Business called for Theron, for example, who was photographed out and about in New York City on Sept. 24. More specifically, she was spotted en route to an appearance on Good Morning America, where she was likely doing some press for her upcoming movie projects, Bombshell and The Addams Family.

The best part about Theron's style is that you really never know which direction she'll take. And that's what makes her such a must-watch on the red carpet and, of course, on the street-style scene, too.

For her Sept. 24 outing, the Longshot actor looked the epitome of menswear-chic, wearing black trousers, a crisp blue-and-white striped Oxford style shirt (that she tucked into the pants), and the ultimate menswear-inspired shoe: a pair of black Oxfords that feature a pointed-toe front, double straps, and buckle detailing.

While nailing the menswear trend can, at times, seem a bit intimidating, Theron's footwear of choice offers an easy way to get in on one of this season's biggest fashion crazes, if, say, an oversized suit is a bit outside of your usual wheelhouse.

What's more, Theron isn't the only one to rock loafer-style, menswear shoes. Amber Heard donned a pair of sleek brogues earlier this year, as has Olivia Palermo, and plenty more will likely follow their lead.

So, upgrade you shoe collection with The Zoe Report's favorite menswear-inspired shoes. Shop the best of the best, below.