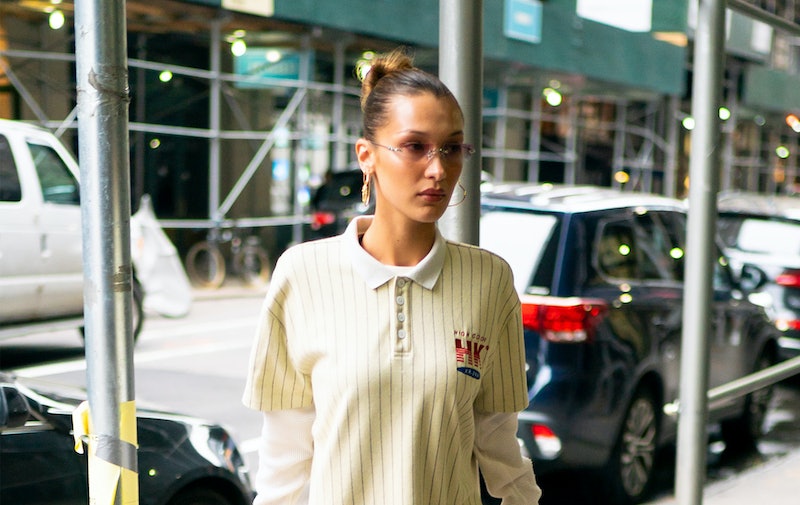 Another day, another stylish Hadid sister ensemble to spotlight. This time around, it's Bella Hadid's pinstriped t-shirt dress you'll want to pay particular attention to. Yep, the sporty staple you thought was strictly reserved for stadiums just proved its street-style staying power — and the youngest Hadid sister has officially found the coolest way to wear it.

The 22-year-old has long favored a more streetwise approach to dressing, effortlessly fusing together her love of athlesiure and sportswear into a single streamlined look. And on Tues., she did it yet again, when she stepped out to celebrate Gigi's 24th birthday.

On April 23., Hadid was photographed arriving at her sister's NYC apartment in a car filled to the brim with colorful balloons. But party favors aside, the model's outfit proved to be the real high-point of Tues.'s celebratory sighting.

Hadid looked the epitome of sporty-chic in a t-shirt dress and sneaker combo. Her frock, which hailed from Copenhagen-based brand, Han Kjøbenhavn, featured all the elements of a baseball jersey, including a classic collar, a button-down front, and a pinstripe motif, though its flowy silhouette made it feel more feminine than those worn by MLB pros.

She reached for her go-to shoe of choice: a pair of sneakers. Specifically, Hadid opted for Adidas' newly released FYW S-97 style, which has that coveted bulky shape and lug sole, as well as green and neon-yellow embellishments for the perfect pop of color.

Per usual, the 22-year-old went with her signature '90s-inspired updo, a hairstyle that put her $40 heart-shaped hoops and pink-tinted sunglasses on full display.

While bike shorts, oversized track pants, and comfy hoodies are this season's must-have sportswear essentials, Hadid's most recent getup makes a convincing case for adding a jersey dress into your lineup, too.

Ahead, The Zoe Report handpicked the best Hadid-inspired dresses on the market, including her exact $137 find.

Cop Hadid's exact T-shirt dress right away. Channel her off-duty look by pairing it with white sneakers and ankle socks. Or, slip into heels (and neon-green socks) for an unexpected touch.

Meet the one-step outfit you'll want to live in all season long. Wear it like Hadid did with chunky sneakers or take another cool (albeit polarizing) approach by opting for socks with hiking sandals.

A baby-pink color, side slits, and a high-low hem keep this polo dress inherently feminine. Add in pink striped socks and matching heels.

Take this polo dress from the stadium to the street in seconds. For either scenario, stick with comfy white kicks, a cool fanny pack, and a PVC visor.

This is one polo dress you can't go wrong with. Best of all, though? You can work it into your office wardrobe, too. Style it with strappy black heels for a busy day of meetings.