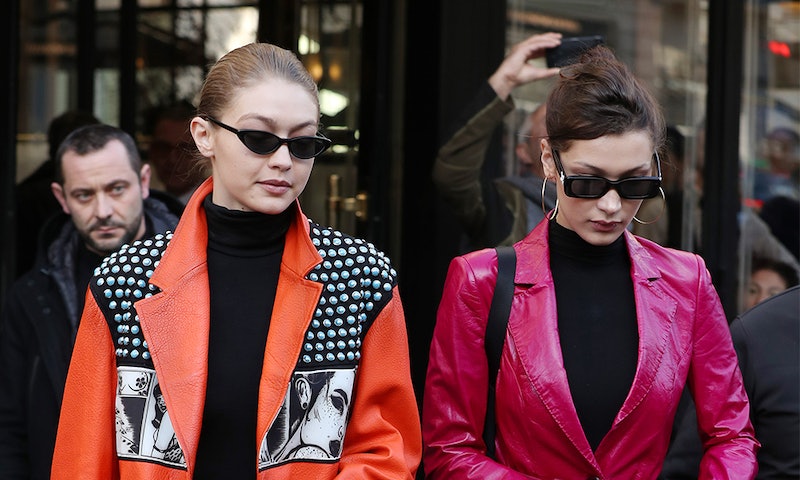 Bella and Gigi Hadid have a developed a style that's uniquely their own. The former typically tends to pay homage to the early aughts, while the latter prefers to piece together her outfits with of-the-moment staples, like cowboy boots, neon sweaters, and matching suit sets. Much like their wardrobes, their beauty looks are usually very different, too. That's why it was such a surprise when Gigi stepped out in Bella Hadid's favorite '90s hairstyle — a sleek, retro-inspired updo that's actually super simple to recreate.

On Feb. 26., the oldest Hadid sister was photographed out and about in Paris, looking as chic as ever in a black turtleneck, skinny jeans, and an oversized black blazer. Clearly, Gigi had French-girl fashion on her mind while she was getting ready for a busy day of fittings and meetings, reaching for timeless wardrobe staples that have become a mainstay in every Parisian's closet.

But her street-style getup wouldn't be complete without the addition of a few trendy accessories, including thin-rimmed sunnies — a Hadid sister signature — and a pair of high-heeled cowboy boots that are unlike anything you've seen before. The most eye-catching part about her look, though, was her hairstyle: a slicked back, '90s-era bun that had Bella written all over it.

More often than not, Gigi wears her long, blonde tresses in loose, relaxed waves, which is why the Feb. 26 hairstyle sighting was quite an unexpected (albeit very welcomed) change of pace. It's also worth noting that her younger sister has been spotted with the exact updo countless times in the past.

With a stamp of approval from two of the biggest names in the industry, it's safe to assume the '90s-inspired hairstyle is bound to become one of the most popular of 2019. And luckily, you don't have to be a salon pro to recreate it either — it's super easy and takes just a few minutes.

The first step? Skip a shower and work with textured, second-day hair, pulling it back into a wispy, mid-height bun. Secure with a scrunchy à la Bella or make like Gigi and pick an elastic that stays hidden. Finally, pull out a few face-framing pieces that infuse the updo with a nonchalant flair — a subtle styling touch that defined '90s-era updos.

Ready to try it out for yourself? Ahead, The Zoe Report rounded up some must-have products to have on hand when recreating this Hadid-approved updo. Hair clips and other '90s accessories are optional, though highly encouraged.