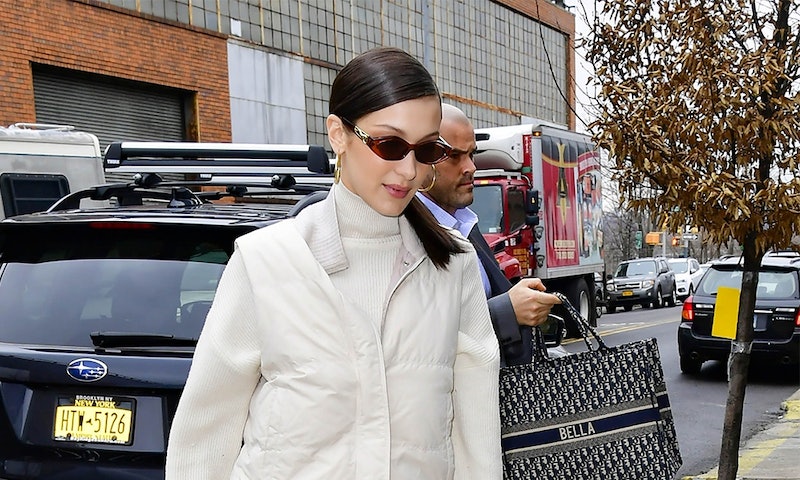 If there's one thing the street-style scene of Jan. (and now Feb.) has demonstrated so clearly, it's that 2019 is the year of bold, over-the-top fashion trends. Case in point: Slime green is in, the more oversized the fit, the better, and animal print has officially become a wardrobe neutral. But, if you're not ready to dive head first into out-there trends, you'll be happy to know there are approachable ways to rock them, too. Enter, Bella Hadid's snakeskin pants: an easy way to wear one of the most sought-after prints of the year.

On Feb. 7, Hadid stepped off Ralph Lauren's Spring/Summer 2019 runway and onto the streets of the Big Apple, but not before making a major outfit change. The model traded in the midi-length, gold lamé dress she wore on the designer's catwalk for a pair of snakeskin pants that might just convince even the most pattern-shy of people to test print.

Snake-embossed pants aren't quite as intimidating to wear as one might actually think. And the key to styling them the right way lies in Hadid's latest off-duty look: keep the other staples in your ensemble simple and understated, as not to overpower the bold print. The 22 year old decided to team her patterned bottoms with toned-down, cream-colored pieces, including a turtleneck sweater and a puffer vest.

Hadid went the comfy route with her footwear, choosing to wear white sneakers en route to her next New York Fashion Week event. A pair of large, gold hoop earrings infused her look with early-2000s appeal, while her dark-brown, thin-rimmed sunglasses harked back to the early '90s. Hadid's off-duty look hit on several major of-the-moments trends that she combined effortlessly into one.

Everything about the model's outfit was a clear home run, and the fact that it so easily demonstrated how to wear snakeskin made it all the better. So toss your go-to black jeans aside, and slip into a pair that's covered in the bold, slithering print à la Hadid. Just remember — stick with simple basics up top, and you're good to go. Ahead, The Zoe Report's favorite snakeskin pants to wear this season.

This pant will give any outfit an instant edge. Make like Hadid and team it with toned-down staples. Or, step it up a notch with a patent leather top and chunky hiking boots.

These python-effect pants will have you slithering around town in serious style. Keep it simple up top with a black tee, and add in bright accessories (think: a slime-green bag) for a bold touch.

Your average skinny jeans just got a major upgrade, thanks to the snakeskin trend. Go for something easy and cool by throwing on a casual hoodie and white sneakers, or dress it up with black ankle boots and a leather jacket.

ASOS is always a great option for slightly more affordable takes on the season's biggest fashion trends. Case in point: These snake detail pants that are cut in an airy, wide-leg silhouette that's perfect for spring and summer.

These pants fuse two major trends in one — snakeskin and neon green. In other words, they're the ideal choice for anyone who follows the motto "go big or go home" when it comes to their personal style.