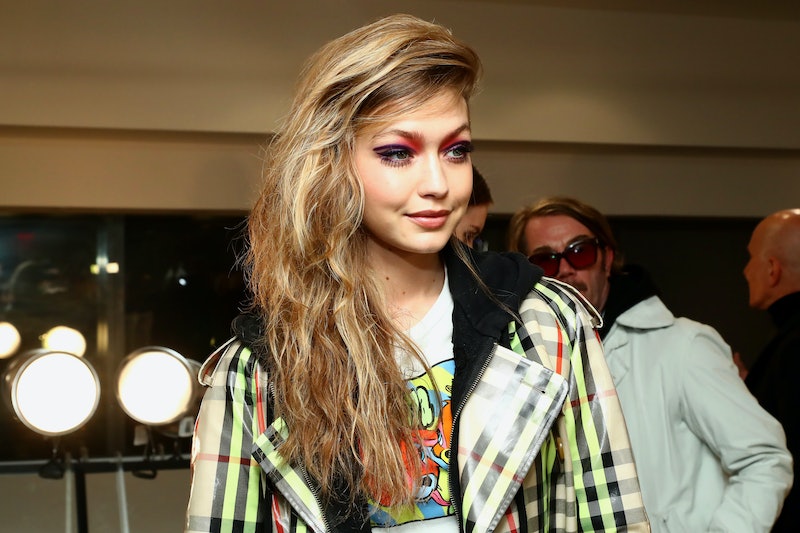 There's a reason almost every supermodel in the industry was sporting all-denim at L'Avenue in New York City on Mon. night. Canadian tuxedos were the dress code for Gigi Hadid's 24th birthday party and you probably can't think of a more fitting theme for this street-style queen. She and all her cool-girl friends put their best trend-forward twists on the age-old outfit formula for the celebration.

Olivia Culpo, Taylor Swift, and Ashley Graham were just a few of the notable guests who filed into the luxe French eatery at Saks Fifth Avenue for one of the most important birthday bashes of the year.

Judging by their Instagram Stories, there was a photo booth, a bottomless supply of tequila, and a playlist full of Britney Spears, who actually might have been the inspiration behind the party's theme.

According to Harper's Bazaar, those iconic all-denim outfits Britney Spears and Justin Timberlake wore to the 2001 American Music Awards were Hadid's muse. The birthday girl sported her best Canadian tuxedo, which consisted of a denim jacket over a white crop top, slightly distressed, straight-leg jeans, and her favorite Dr. Martens combat boots — a classic Gigi Hadid look from top to toe.

In fact, Hadid's whole family took the denim dress code seriously. Being the supportive (and immensely trendy) sister she is, Bella went full-on triple denim in flared jeans and a very dad-inspired button-up shirt over an asymmetric denim corset. She paired the look with dramatic hoop earrings and yellow lace-adorned combat boots.

You don't need a themed party invitation to wear Hadid's double denim, though (obviously, because the model wears almost this exact same outfit in her everyday life). Copy her birthday look with The Zoe Report's favorite Canadian tuxedos, ahead.

Work the utility trend into your all-denim look with this easy and versatile jumpsuit. You'll want a trusty one piece to wear all spring anyway.

Opt for a bold Western look with looped fringe and old-school yokes. The cropped and boxy silhouette of this bleached denim jacket complements its corresponding pants' super-wide leg cut so well.

Channel your inner Olivia Culpo with a denim dress instead. This one has a trend-forward zip-front closure and a sleek pencil silhouette.

The modern version of a Canadian tuxedo features a miniskirt. Try this blue-jean jacket and cut-off skirt combo immediately this spring.