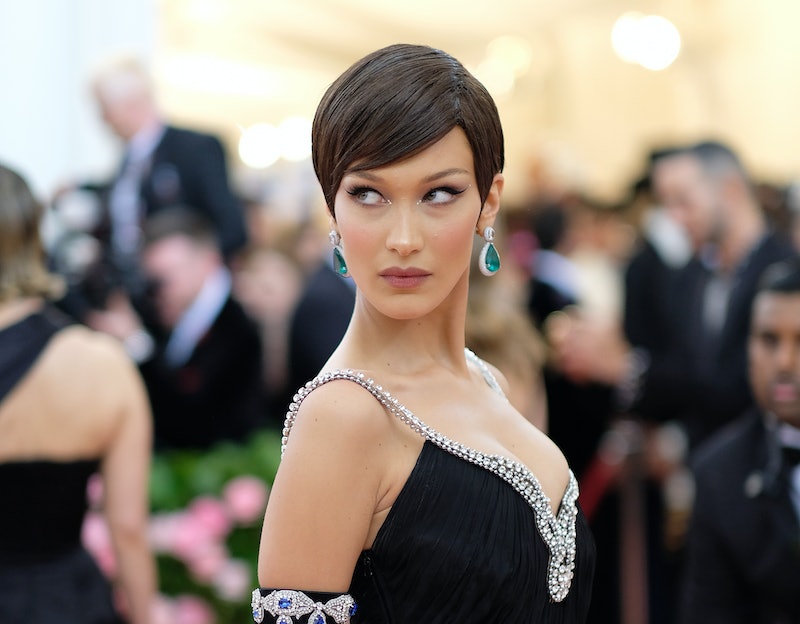 It's 2019, and the style influence of '90s TV icon, Carrie Bradshaw (portrayed by the ever-fashionable Sarah Jessica Parker), is still as prevalent as ever. And it's not just SJP who's been emulating her on-screen role IRL. Seasoned style icons like Emily Ratajkowski and the Duchess of Cambridge have all had their own Bradshaw moments in recent months. And now, a new fashionable celeb joins the list of Sex and the City sartorial devotees. Enter, Bella Hadid (and her white shirt dress outfit) — a 2019 way to rock a classic Bradshaw ensemble that you, too, can recreate in a pinch.

Hadid is certainly no stranger to a seriously nostalgia-inducing fashion moment. A '90s baby herself, the model is a master at all-things from the bygone decade (read: chokers, combat boots, scrunchies, sky-high ponytails, and bucket hats, just to name a few). As such, you can always expect those pieces to be sprinkled into her off-duty outfits — and her latest street-style look was no exception. It included a super-high ponytail and a wardrobe staple Bradshaw made iconic.

On July 18, Hadid was photographed on an evening dinner date with older sister, Gigi Hadid. The two stopped by buzzy New York City eatery, L'Avenue (located inside Saks Fifth Avenue), looking as cool as ever in their coordinating ensembles. Gigi went with a jeans-and-tee combo, topping off the getup with a striped denim button-down. Bella, sticking with the denim theme, opted for a two-piece pairing you're going to want to emulate ASAP.

The base of the 22-year-old's outfit was a crisp white shirt dress from Steele, dubbed the Darted Boyfriend Shirt Dress. It features a subtle high-low silhouette, satin-covered buttons for a feminine flair, and it comes with an elastic clip that you can attach on the back when you want a more fitted look. Bradshaw wore a similar dress (belted, of course) in an episode of Sex and the City, and Hadid just singlehandedly brought it back into the spotlight.

Though the runway superstar chose to forgo a belt (the elastic clip offered up the same form-fitting touch), she did top off the shirt dress of with a myriad of standout additions, including an oversized denim jacket by Fenty, black knee-high boots, her favorite Oliver Peoples sunglasses, and hoop earrings — the latter two of which further paid homage to the '90s.

Inspired to channel your inner Bradshaw, as well? Ahead, shop The Zoe Report's roundup of the best shirt dresses on the market, including the $75 find Hadid was just spotted wearing.

Cop Hadid's exact shirt dress while it's still in stock for a reasonable $75 (yes, really).

Ground this shirt dress with extra-chunky combat boots for a cool juxtaposition of styles.

If you prefer a shirt dress with a bit more oomph, look no further than this Eloquii number, which features a striped motif and a colorful waist belt.

This isn't your average white shirt dress. As per usual, Sacai churned out a fresh take on the closet classic, adding in a black velvet sash tie.