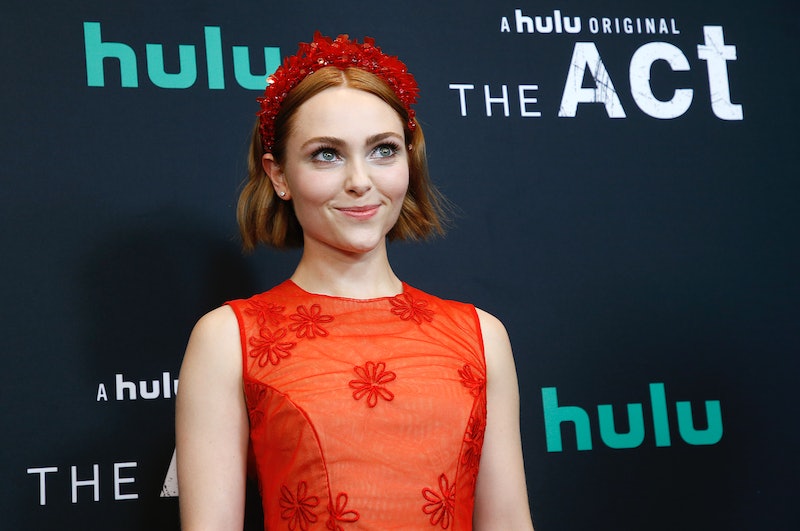 Bouffants, neck scarves, and shift dresses are no longer a thing of the past. The '60s are back and there's no better example of mod makeup than the blue eyeshadow AnnaSophia Robb just debuted. The actor's ethereal lids will make you want to scour Sephora for a pastel palette STAT.

If Twiggy and Mia Farrow suddenly merged into a millennial, the result would be Robb en route to a Roger Vivier dinner last Fri. night. Ever since the actor cut her hair into a vintage pixie this past fall, she has looked to have magically walked out of a 50-year-old issue of Vogue, but this recent blue eyeshadow moment really drove the old-school aesthetic home.

Makeup artist and cosmetics entrepreneur Fiona Stiles was the one behind Robb's darling retro look. The shimmery, sky-blue hue not only covered the 26-year-old's lids, but also crept into the corners of her eyes and made its way under the lower lash line, just like they used to wear it in Twiggy's time.

In more recent decades, applying such a vibrant hue beneath the waterline probably would have been considered a faux pas, but beauty trends have been favoring this sort of allover color look lately.

Giving it even more of a '60s feel were the spider-like lashes, which have staged a little comeback of their own of late (See: Sophie Turner at the 2020 SAG Awards, or Lucy Boynton pretty much any day of the week).

As for pastel eyeshadow colors, Lily Collins and Margot Robbie have been doing their share of that lately. Come to think of it, maybe this whole resurgence of retro beauty started when Robbie copied Sharon Tate's iconic braided hairstyle during the Once Upon a Time in Hollywood premiere in Cannes last year.

Whatever the reason, '60s trends are undoubtedly back on the rise and eyes seem to be the primary focal point. Think: fierce cat-eyes, floating liner, defined lower lashes, and lots of pastel hues. A few eyeshadows to help you recreate AnnaSophia Robb's colorful throwback moment, ahead.