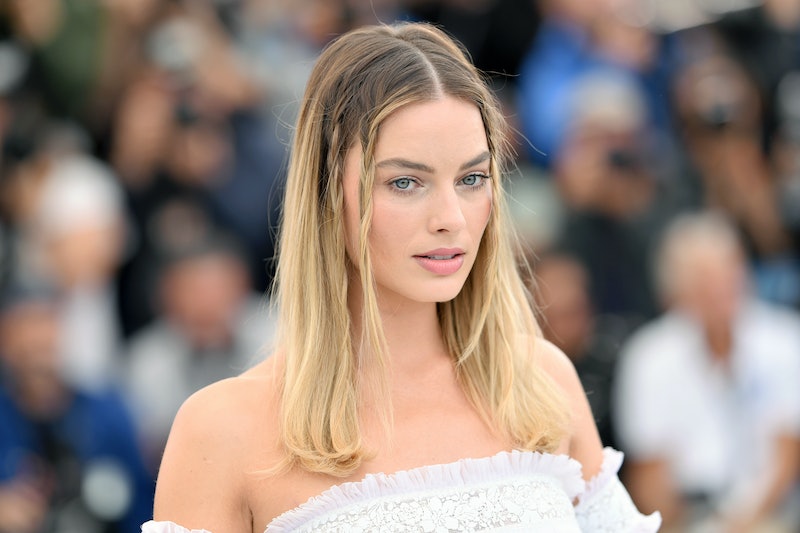 The red carpet has seen plenty of remarkable fashion and beauty moments over the years. After all, that's where many stars pull out some of their biggest and boldest moves of all time. And while 2019 alone has, undoubtedly, been one for the books in terms of glamorous evening looks at a major black-tie gathering — read: Elle Fanning at the Cannes Film Festival and Beyoncé at London's The Lion King premiere — the most striking one of the year just made its debut. In case you missed it Mon. evening, here's Margot Robbie's dreamy Once Upon A Time In Hollywood premiere look again.

It's the movie premiere everyone has been waiting with bated breath for. After earning a nearly eight-minute standing ovation at the Cannes Film Festival back in May, the movie's cast trifecta that is Brad Pitt, Leonardo DiCaprio, and Margot Robbie landed in L.A. on July 22 to walk the red carpet for the Hollywood premiere of Quentin Tarantino's latest project. Both Pitt and DiCaprio looked dashing as per usual, but the leading lady (aka, Robbie) nearly broke the internet when she stepped out looking like a retro goddess.

Robbie, who plays Sharon Tate in the forthcoming film (in theaters everywhere on July 26), has been taking some major cues from her on-screen role, serving up one '70s-inspired look after the other. First came her boho braids at Cannes, then her monochrome orange makeup for a recent photo call event, and now, it's every facet of her retro-leaning Once Upon A Time In Hollywood premiere ensemble that has everyone in an absolute frenzy.

On July 22, a goddess by the name of Robbie floated down the red carpet at the iconic TCL Chinese Theatre in an utterly romantic, all-white look. The dress, crafted from a flowy chiffon fabric, is from Chanel's Fall 2019 Couture collection (to the surprise of no one) and features a plunging neckline, sheer, voluminous sleeves, and a large bow detail around her waist. The gown initially debuted on the runway in a navy-blue color way, with Mon. night's dreamy ivory iteration made just for Robbie. A pair of gold Baroque earrings and a gold Chanel clutch played up the goddess vibes even more.

Inspired to recreate the actor's latest red-carpet look? Do so with The Zoe Report's roundup of products, below.