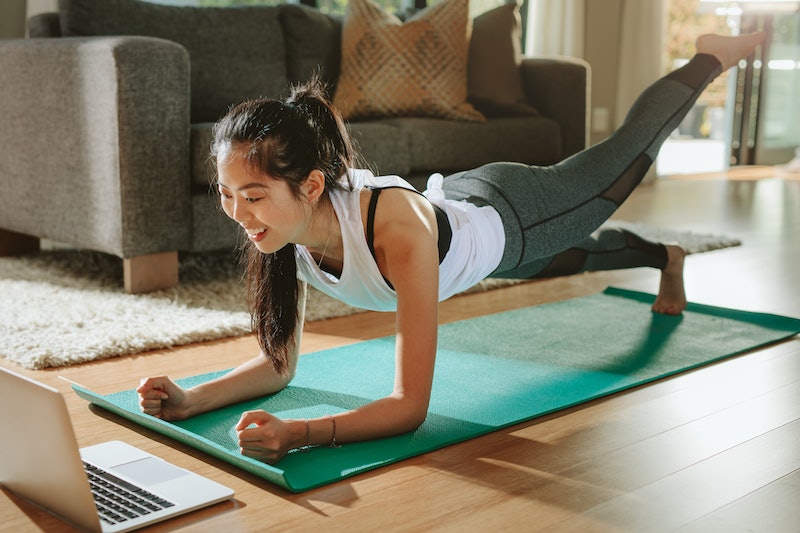 With so many gyms and fitness studios still closed for the foreseeable future, many people are taking their workouts into their own hands, and getting more and more creative while doing so. You may be missing the props, barbells, and other pieces of equipment you used to rely on, but experts say you don't really need anything besides yourself to get an effective workout. In fact, there are plenty of bodyweight exercises that will have you feeling the burn and breaking a sweat — and you can do them no matter where you are.

Some people's home workout routines involve expensive pieces of equipment like stationary bikes or treadmills, while others have taken to using household items to add weight or offer resistance. But the truth is that you can get a full-body workout either. Your own bodyweight is enough to give your core muscle groups a challenge, but it helps if you know the best ways to put it to use.

Enter the advice from top trainers, who have been pivoting their platforms to workouts that can be done from anywhere, without using anything but your own body. Ahead see what moves the pros suggest performing to feel strong and toned without so much as a single dumbbell, and try combining a few to get a comprehensive at-home workout.

The traditional deadlift is done with a barbell, but according to Lacey Stone, a celebrity trainer you'd probably recognize from E!'s Revenge Body, you can still work your quads, hamstrings, and glutes with a modified, bodyweight-only version. "Stand with your feet shoulder-width apart, lift your chest up, and straighten your lower back," she instructs, for those who want to try this one at home. "Keep your chest lifted and your lower back engaged as you slowly drop down to the floor; Keep both hands shoulder-width apart as you reach for your toes. Remember to keep a slight bend in your knees as you execute the move. Once you reach down as far as you can while keeping your core engaged, return back to start position, squeezing your booty at the top."

You'll get your heart pumping while working your core, glutes, and legs doing this compound move, according to Stone. "Start in a squat position reaching between the center of your legs with your right arm while keeping your core engaged," she explains. "Explosively pop up to standing position with both hands by your side. Once standing, explosively jump back down into squat position now placing your left arm between your legs. Repeat this exercise while alternating hands."

If it's your abdominals and obliques you want to target, trainer and Golden Fitness founder Micah Golden-Grant recommends this move. "Begin by getting into a side elbow plank with feet staggered, top in front of bottom and the top hand reaching toward the sky," he says. "Perform by rotating the torso downward while reaching that hand through the hole between your body and the floor. Keep the lower body still, so the rotational abs are doing all of the work and therefore seeing the most benefit" Try doing three sets with 10 to 15 reps on each side. Want to make it a bit more challenging? Golden-Grant suggests stacking your feet instead of staggering them.

Give your glutes and quads a burn with this lunge variation that adds an element of balance and stability. "Elevate the back foot onto a couch, coffee table, or stair positioned so that the shoe laces are facing downward," says Golden-Grant. "Set the front foot far enough forward so that your weight is driving through the front heel as opposed to the toes. Perform by lunging all the way down, then halfway up, then all the way down a second time, and then all the way up." The fitness expert notes that your weight should be driving through the front heel, your glutes and core should be engaged, and your shoulders retracted. He recommends three sets of these, with eight to 12 reps on each side.

Your upper body, particularly your chest and shoulders, will be feeling this exercise, but Golden-Grant mentions that lock ups also require you to engage your core, since you'll be sustaining a high plank. "Begin by setting up the plank with the feet slightly wider than the shoulders," he explains. "Perform a push up and upon coming up, lift one hand in slow motion and tap the opposite shoulder." While tapping, try to keep your hips and lower body still by bracing your abs and glutes. Alternate your hands with each rep, and if you need a modification, try dropping down to your knees. Do three sets of these with 10 to 16 push ups (or five to eight taps on each side).

Similar to the last exercise, this move focuses on the upper body, but instead of push ups, you'll be shifting from pike to plank positions. "From a high plank position, lift your right hand to tap your left foot," says Erica Hood, creator and CEO of HoodFit, which is currently offering an August fitness challenge that uses bodyweight only. "Bring it back to plank and lift your left hand to tap your right foot. Get back into a plank position and continue alternating sides for eight to 12 reps." You'll also feel this one in your core as you move through pike, and get a nice stretch through your hamstrings and calves.

Want to turn on your triceps? This move ought to do the trick. "Start seated and press up in to a crab position with fingertips facing your heels," says Hood. "Begin to bend both arms into a tricep dip while simultaneously lifting your right knee into your chest and straightening your arms while lowering the right leg down." Repeat this on the opposite leg, making sure to dip and crunch at the same time. Try doing eight to 12 reps, alternating sides.