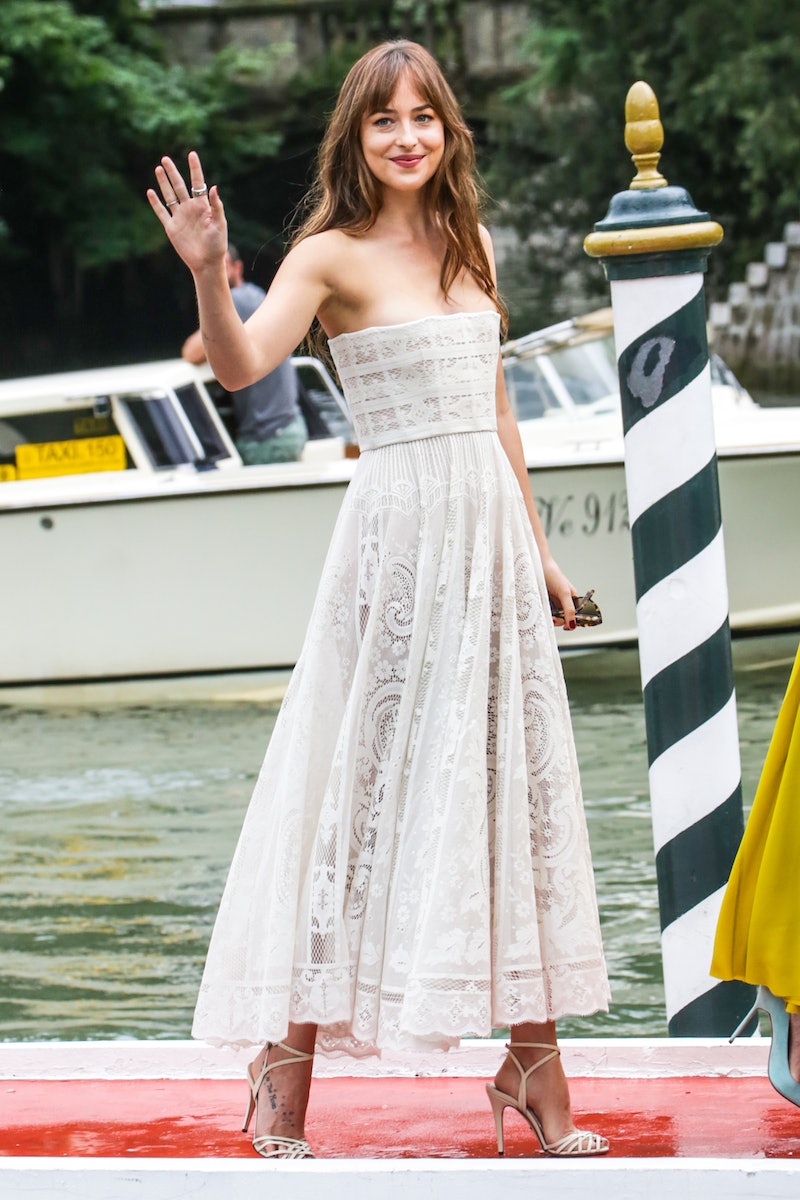 Any time Dakota Johnson's name comes up, inevitably, so will her indescribable "It-factor". Some might point to her midcentury modern home, whose walls are piled high with decades-old vinyl records; others, her furry companion — a Yorkie named Zeppelin. Still, her general sense of cool comes in huge part from her enviable style, which fans have sought to nail down for years. Alas, Johnson is ever the low-key celeb, making it tricky to learn her do's and don'ts. That's why TZR's calling out the top five celebrities with style like Dakota Johnson, whose outfits will quickly demystify some of the combinations and hacks that she relies on, herself.

That said, naturally, it's a mixed bag. Whether you're talking about Johnson's dressed-up days (pinstriped suits) or her casual, here-to-there attire (jeans and Dad sneakers), the answer is likely to be different. For the former, Jennifer Lawrence is a perfect match, even incorporating flirty lingerie pieces underneath like Johnson did, for a total bedroom-to-boardroom look. For leisurely outfits, Emma Roberts is a veritable source of likeminded inspiration. In one look, the actors even went as far as choosing outerwear pieces in the same print, and loafers from the same luxe fashion label. Hint: Johnson plays brand muse to it.

Read along for the It-girls with repertoires of style that rival Johnson's:

Lately, Hadid has been leaning into '80s layering trends. The Dakota Johnson-approved white undershirt has been top of mind for the model, who also wore hers with a v-neck sweater, funky trousers, and an oversized carryall.

A high-impact power suit is a favorite of Johnson's for any public appearance, which actor Sienna Milller agrees on in her own personal-meets-professional style. Both chose suits with delicate striping, though Miller's went with a punchier color-way than Johnson's palatable neutrals.

The loafers alone are enough to remind everyone of Johnson's favorite shoe. Hers are always from Gucci, which Roberts took after with a similar pair from the Italian fashion house. Plus, the two love a bold outerwear piece — in this case, a leopard-spotted one.

In chunky sneakers and brownish-green blazers, these two looks bear an uncanny resemblance to one another — as do the rest of their go-to outfit formulas. The only recognizable difference? Gerber is known to favor shoulder bags (as displayed here) while Johnson never passes up a great saddle bag.

Both known to tie in a flirty element when dressing to impress, these likeminded ensembles feel right at home in both of their wardrobes. Johnson's look called on Gucci lingerie for its show at Milan Fashion Week, while Lawrence wore a floral motif bodysuit underneath her jet black suit.