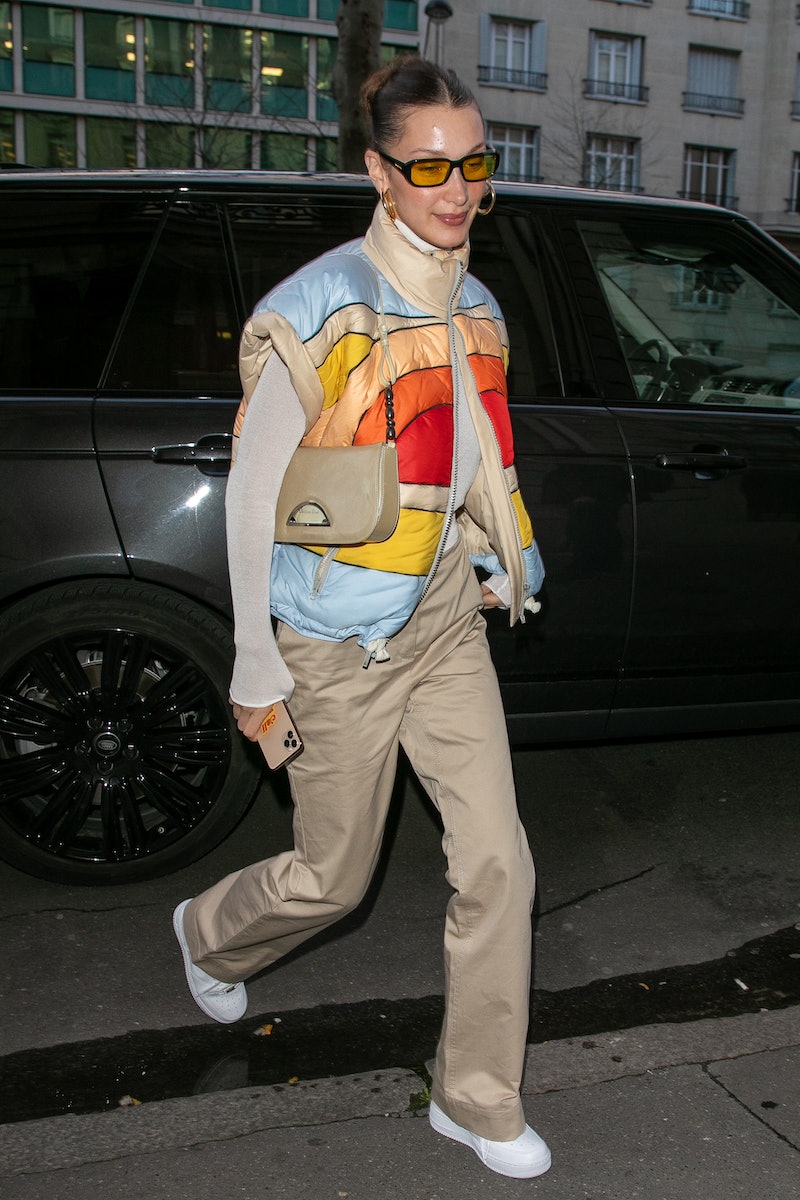 Anyone acquainted with Bella Hadid's style file will instantly point to its more obvious, Y2K-centric features — gradient sunglasses, tiny shoulder pouches, and low-rise jeans — which span dozens of her best looks over the years. Still, the 24-year-old model is known to experiment, and her latest look turns the clock back a few decades further. Taking some notes from the style icons of the late '80s and early '90s, Bella Hadid's varsity jacket outfit makes a strong case for old-school layering, and it's perfect for keeping warm through late fall months.

On Oct. 29, Hadid was spotted out in Manhattan, wearing a relaxed outfit that featured overt nods to the retro era. Past her CDC-recommended face covering, Hadid wore a suede-collared varsity jacket with striped trim (which appears to be vintage) over a navy blue v-neck sweater. She could've stopped there — but, instead, she tucked a fitted white shirt underneath it all, which It-girls from Demi Moore to Meg Ryan wore through the '80s and early '90s. To double-down on the layered bright whites, Hadid tied in a set of thick ankle socks, along with a pair of black, no-frills penny loafers. Together, the socks (which are a long-standing Diane Keaton favorite) and undershirt clearly signaled the era's chunky layers trend — and they're primed for staying warm for the final weeks before puffer season.

While impactful and refreshing, this outfit formula isn't entirely new to Hadid's dossier of looks. All season, the model's called on some variation of a cropped jacket (nylon track jackets, bombers, and so forth) — always with an assortment of layers underneath and, of course, Hadid's favorite gold jewelry. It wouldn't be a Bella Hadid look without some small nod to the aughts, which she invoked with her leopard hobo bag from Chrome Hearts.

To recreate her decade-centric look, be sure to shop a varsity jacket like Hadid's, such as Veronica Beard's on-sale Joanie jacket. From there, you can grab her exact loafers (also on sale), and pair them with Comme Si's Instagram-famous socks for a similar look.

To grab the entire ensemble, browse below: