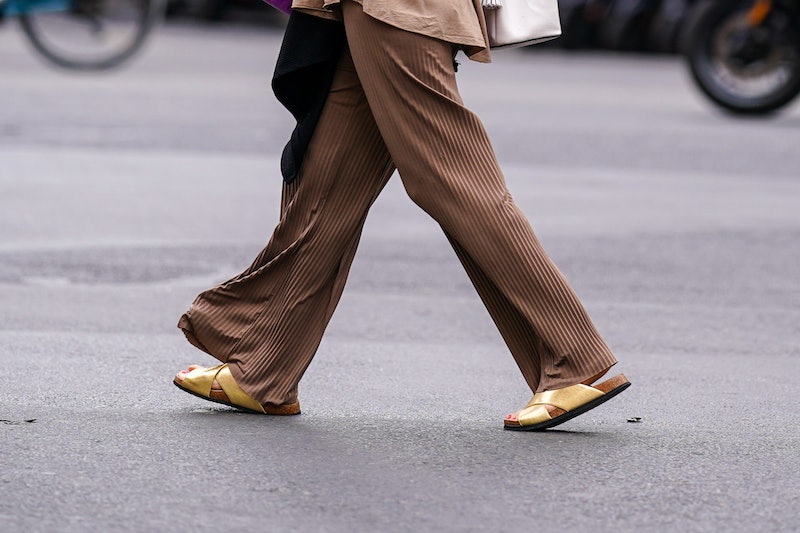 There's a reason that Birkenstock has become such a household name in fashion. Its classic, double-strapped Arizona sandal might seem simple, but its place in the footwear market cannot be overstated. It's been a go-to for stylish girls like Gigi Hadid and Kendall Jenner, who've walked one runway show after another in the low-profile shoe. While the label that catapulted the silhouette into favorability is likely on your radar, there's actually a number of other brands like Birkenstock that are worth getting acquainted with — all of which tap into the current market of easy, unfussy sandals.

Take, for example, Freedom Moses, whose two-buckle silhouette is available in just about every color profile, all for the very reasonable price of $45. There's also Loza Maleombho, whose recent appearance in Beyonce's Black Is King has made its footwear likely to sell out in the near future.

For the full round-up, read ahead — and be sure to reference the many times celebrities have worn Birkenstocks in totally different ways, for some styling inspiration:

For those who favor clean, minimalist detailing, Cesti's footwear is sure to soothe. Stockist W Concept carries its easy, low-profile sandals, all of which come in muted tones.

For a price point that's well worth taking the plunge, Freedom Moses' super reliable sandals are nearly a dupe of Birkenstock's Arizona silhouette.

Loza Maleombo's eponymous brand reconciles modern fashion with cultural and sub-cultural influences, specifically those from Ivorian tribes along the West African coast. Its shoes are handmade by Ivorian artisans, with gold-toned, emblematic hardware.

Rekken is a Korean footwear brand that's known for its thick chain-adorned footwear — but its Birkenstock-like shoes also receive tons of acclaim. The Nanashoo slides boast crystal-embellished buckles and an eye-popping plaid upper that Cher Horowitz would approve of.

This English footwear brand has a rich history that rivals Birkenstock's — with 150 years of creating world-class Oxfords and Chelsea boots, its repertoire of sandals is just as timeless.