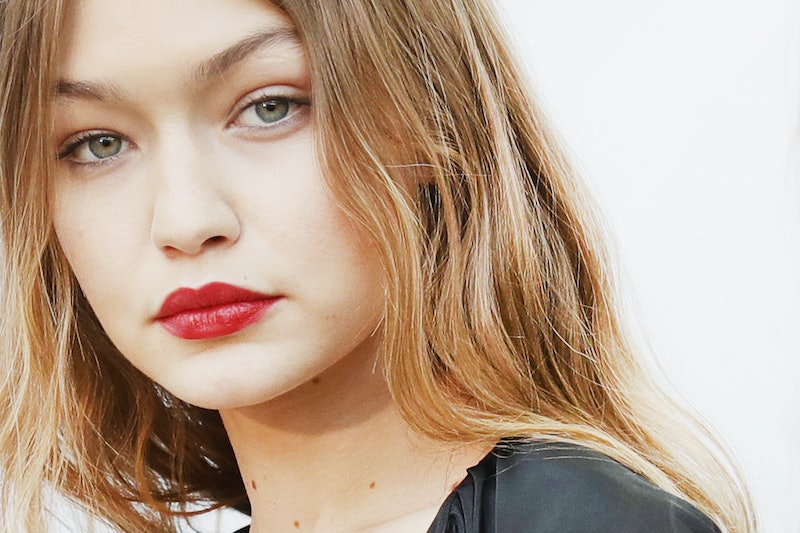 Feel like you're due for an update in the beauty department? If so, now could be the time to take model-approved trends for a ride, starting with looks pulled straight from Gigi Hadid's makeup routine. The 23-year-old model has been a household name in the fashion and beauty industries for years now, regularly serving up swoon-worthy looks, and even launching a makeup collaboration of her own, the Gigi Hadid x Maybelline line.

When the model isn't busy designing shade ranges and formulas inspired by the east and west coasts, she's demonstrating her beauty sensibilities via selfies on Instagram. Thanks to the treasure trove of gorgeous looks on Hadid's platforms, it's so simple to take notes and infuse her go-to trends into your own beauty routine. Ahead, explore The Zoe Report's top four Gigi-inspired looks to give a whirl this year, and products to achieve them.

As Hadid has proven time and again, a strong red lip is never a bad idea. The daring beauty fixture has the capacity to elevate any makeup look with just a few swipes of color, and can complete an outfit that feels like it's missing that extra something. From bright scarlet to deep crimson, there's a fiery red hue for each and every skin tone, including Hadid's sun-kissed Malibu tan.

Not only does this long-wear lipstick have serious staying power, but it won't dry out your pout. Dab onto your finger for a wine-stained effect, or apply straight from the stick for more color payoff.

When it comes to eyeshadow, Hadid usually leans towards understated nudes with frosty accents. From dusty pink to smoked-out mocha, the model makes a case for romantic subtlety when it comes to eyes. A nude shadow is a great way to make your eyeliner pop — and it will pair flawlessly with a matching neutral lip or a deeper, vampy tone.

This neutral palette ranges from bubblegum pinks to earthy browns in both matte and shimmery formulas, making for endless pairing possibilities.

As a Malibu native, Hadid has always had that California glow about her — but her highlighter takes it up a notch. To accompany her long, golden locks, the model often tops off her face with a touch of glimmery gold to accentuate her features. A dash of light-catching gold has the power to turn a look from day to night in no time.

Becca's cult-favorite highlighters are some of the best around, and this dazzling gold will deliver a look that seriously deserves a trophy.

It seems like one trend Gigi brought with her when she emerged onto the scene was the return of fuller brows. Gone are the days of skinny arches — fluffy, natural-looking eyebrows have taken their place once again. If you're considering growing yours out, allow Hadid's feathery wisps to be your guide.

If you're dealing with patchiness, this pigmented gel from Milk Makeup is a great solution. Not only will it fill in any empty spaces, but it will make your existing brow hairs look darker and more full.

This article was originally published on 1.31.2019