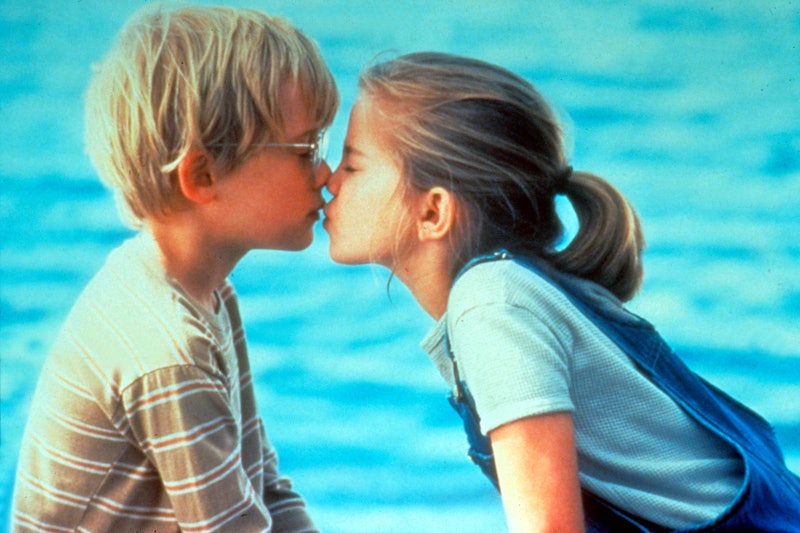 Everyone deals with tough times in different ways, and that can translate to the kind of entertainment you're craving. For example, some find that a knee-slapping comedy is the perfect escape while others turn on a mystery or crime series to distract from the stresses of the day. And then there are those who opt for sappy, sentimental movies as their preferred form of cinematic therapy to let it all out while feeling all the feels.

If the latter of those aforementioned options best describes your current state of being, there's a long list of good ones to choose from — even if it means keeping a box of Kleenex at close hand. Some of the best sentimental flicks range from heartfelt family dramas that will have you calling your parents the minute the credits roll to heartstring-pulling love stories that will have you reminiscing about your first crush in the best possible way.

So if you need a break from those fashion-focused films that have been providing you with outfit inspo, the wanderlust-y escapist ones that have been tiding you over until you're able to travel safely again, or whatever else you've been bingeing that's new on Netflix, try turning on one of these 10 heartwarming (and, quite frankly, tear-jerking) movies that are like chicken soup for the soul.

This 1989 flick offers everything that makes a truly great sentimental film: Laughs, love, and lots of tears. In case you're one of the rare people who doesn't already have all the lines memorized by heart ("My colors are blush and bashful, mama!"), it centers around the employees and customers of a carport-turned-beauty-parlor in a small southern town and covers issues like marriage and divorce, health, faith, and, above all, friendship.

An all-star cast including Shirley MacLaine, Debra Winger, and Jack Nicholson is just one of the reasons this 1983 movie remains iconic. These actors deliver some of the most powerfully emotional scenes in cinematic history as they cover a 30-year span of relatable, funny, and tragic moments in both mother-daughter and spousal relationships.

You simply can't make a list of sentimental movies without including this 1997 film that is an undeniable cultural touchstone. The historical drama has it all: A forbidden romance, a fantastic wardrobe and set design, and an ending that will have you screaming "Why?!" at your screen as you sob into a pillow.

Children of the '80s and '90s probably have a few scenes from this iconic film burned into their brains (the one involving bees in particular — but no spoilers!). If for some reason you've not seen it yet, this coming-of-age movie centers around a sweet childhood friendship and tackles issues including death, womanhood, clashing with parents, and many other relatable facets of growing up.

Sentimental Movie: Call Me By Your Name

This 2017 movie is eye candy in just about every possible way, from the idyllic locations (rural Northern Italy in the early '80s) to the the lusty, first-crush type of chemistry the two leads have. It will definitely have you reminiscing about the one who got away from your own past.

Sentimental Movie: The Way We Were

This 1973 love story is one for the ages — and a film that many others have tried to emulate since. A romantic drama starring Barbra Streisand opposite Robert Redford, the movie follows the relationship between two people who fall for each other despite their inherent differences over a couple decades — ups and downs included. The end might not be one of fairy tale happiness, but it's one you'll never forget (and probably be quoting endlessly afterward).

Sentimental Movie: A Walk To Remember

Somewhere between the "Candy" singer/pop star and current day This Is Us star, Mandy Moore was Jamie Sullivan in this 2002 heartbreaker. As the cancer-stricken minister's daughter, she finds herself romantically involved with a misunderstood bad boy (with a heart of gold, of course).

Speaking of Nicholas Sparks adaptations (the aforementioned was based on a Sparks novel, as well) this 2004 romantic drama is one for the ages — and cemented Ryan Gosling as a full-on heartthrob. If it's a will-they-won't-they epic love story you're craving, this Romeo and Juliet-esque tale of well-to-do Allie and wrong-side-of-the-tracks Noah delivers every time.

This Oscar-winner is both a coming-of-age-story and complex (but ultimately relatable) love story that follows three stages of the main character's life: His childhood as the son of a drug addict struggling for positive parental figures, his teenage years seeking purpose and love (while dodging trouble with the law) and exploring his sexuality, and finally his adulthood coming to terms with those relationships.

It's hard to say which love story in this award-winning 1997 flick is more heartbreaking: The platonic, mentor-student one between Matt Damon's and Robin Williams' characters (an uneducated but exceptionally intelligent janitor and psychology professor who are forced into each others' lives) or the romantic one between Damon's Hunting and whip-smart and wealthy Skylar, played by Minnie Driver. Either way, you should plan to have some tissues nearby.