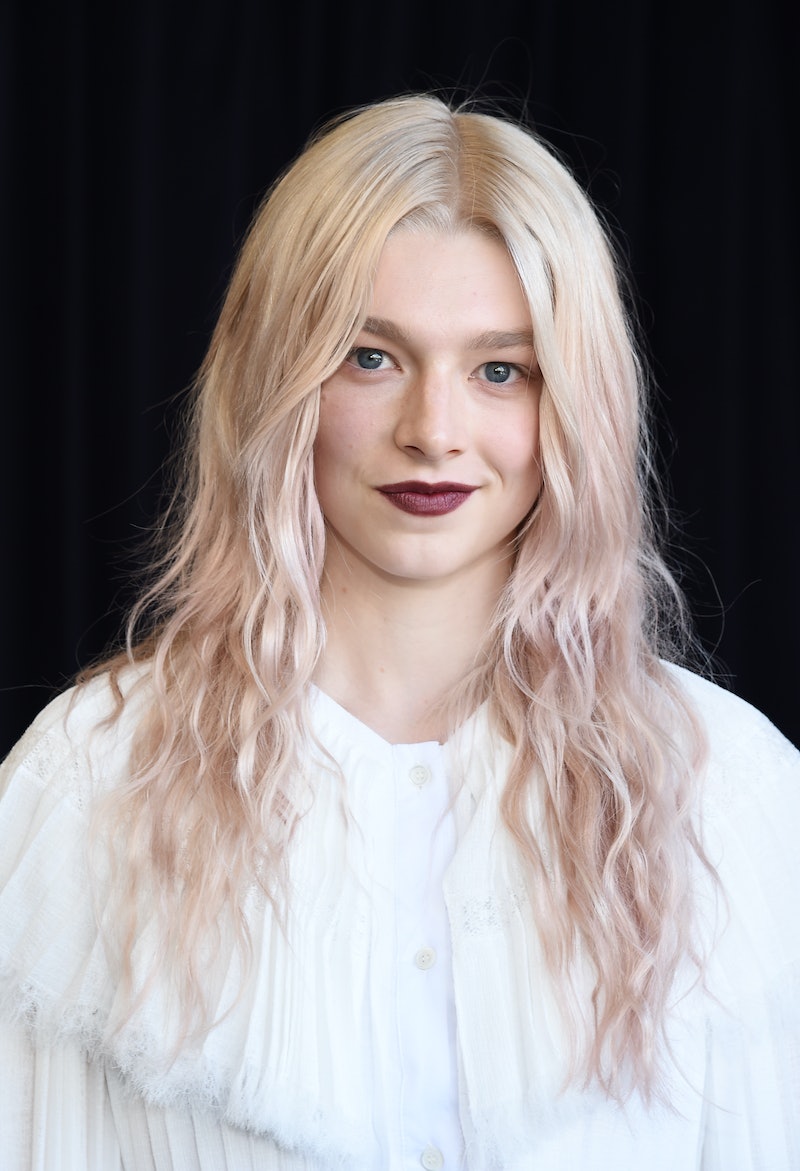 Hunter Schafer’s Instagram serves as a treasure trove of unconventional style moments. The Euphoria actor’s imaginative ensembles, like her timeless yet new-age Schiaparelli garb or the outfits dedicated to crisscrossing basics with avant-garde cutouts, often feel like prophetic visions into fashion’s biggest trends. Schafer’s recent look, a Dion Lee blazer and skirt set, is another prime example of her growing style file in futuristic fashion. On May 2, the 22 year old actor shared an Instagram post showing her outfit. Schafer captioned her post, “periwinkle,” in reference to the light purple color of her two-piece set.

With the help of her stylist Law Roach (who also styles Schafer’s Euphoria costar Zendaya), Schafer’s outfit took any preppy notions associated with a two-piece skirt suit and turned them on their sartorial head. The budding fashion icon — she recently walked in Mugler’s Spring 2021 presentation — is known for adding subversive fashion twists. Take her footwear in the ensemble, for example. Schafer wore a pair of thigh-high, fur-lined lug sole boots (say that three times fast) from Dion Lee versus a dainty, barely-there heel or designer pump. Both the monstrous boots and purple suit initially debuted on the brand’s Fall 2021 runway. The actor’s edgy look also tapped into Jules’ taste for inventive fashion (Schafer’s Euphoria character) as this would be something she’d definitely wear on the show.

Speaking of Zendaya, she commented on Schafer’s Instagram post — as BFFs do — with the comment “BOOOOOOOB,” followed by several exclamations points and a cluster of heart-eye emojis. This can only be seen as her official co-sign on Schafer’s grunge-inspired outfit, which now has over 1.3 million Instagram likes and counting. For fans who miss seeing the two act together on screen (Zendaya plays the character Rue on Euphoria), production details are still a bit hazy for the second season of HBO’s smash hit. Backstage reports filming started on April 5 in Los Angeles. In the meantime, until new episodes hit your screens, you’ll have to settle for Schafer and Zendaya outfit pics to serve as doses of euphoric fashion.

Schafer’s exact outfit — both the blazer and skirt set and chunky, ‘ugly’ boots (what I’d give to stomp around in them for one afternoon) — aren’t quite ready for purchase just yet. Instead, below, you’ll find other suited options and footwear selects that will offer Schafer’s edgy, anti-preppy aesthetic. Whichever two-piece look you opt for, you can safely rely on a statement boot, like the Tara boot from the Gigi Hadid-approved brand Vagabond, to do the transformative, grunge-inspired look.