So fresh and so clean. 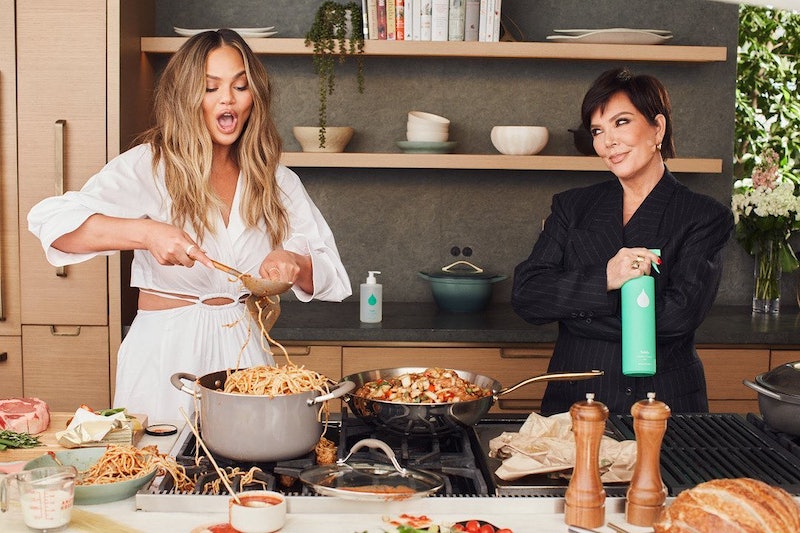 Not only is is possible for opposites to attract, but they can make for some of the most powerful duos. The latest example of this theory just might come from a collaboration of two entrepreneurs that while so different, are both brilliant at branding. Chrissy Teigen and Kris Jenner just announced a line of cleaning products, and it’s bound to be the next big thing for kitchens and bathrooms everywhere.

Last week, both celebrities teased some type of mysterious, forthcoming collaboration and besides the name, Safely, fans could only venture to guess what it was all about. However, as of Monday, March 22, it’s been revealed that the brand — which officially launches March 25 — will include plant-based products for cleaning and personal care use. In an exclusive with People, Teigen and Jenner shared that Safely will include many of the items that have been especially integral during the pandemic, like hand soap and hand sanitizer, as well as hand cream, glass cleaner, and universal cleaner with more to come.

Those who follow Teigen on social media know that the homebody isn’t afraid to get a little messy (as evidenced in some of her online culinary creations) and if you’re familiar with the infamous momager, you know that she’s notoriously particular and insists on keeping her home perfectly organized and tidy. Despite these differences, the partnership — assisted by Good American co-founder Emma Grede — actually makes so much sense, as they’re both devotees of self-care and passionate about the health of their families. They’re also both pretty hilarious, as evidenced by the tongue-in-cheek teaser dropped on both of their Instagram feeds Monday.

You’ll have to wait until Thursday for the full product details (cost, fragrances), but here’s what else there is to know so far: The non-toxic cleaning products are family friendly and made using aromatherapy (no harsh chemical smells), and the packaging is super chic and minimal. Based on the success of Teigen’s growing the Cravings empire as well as the laundry list of brands Jenner has had her hand in, Safely is poised to sell out fast (if you’ve learned anything from the new releases of Skims and Kylie Cosmetics, it’s that), so mark your calendar for the launch date if you want to get your hands on the goods.