How the Middle East shaped modern perfumery (and has for 1000+ years). 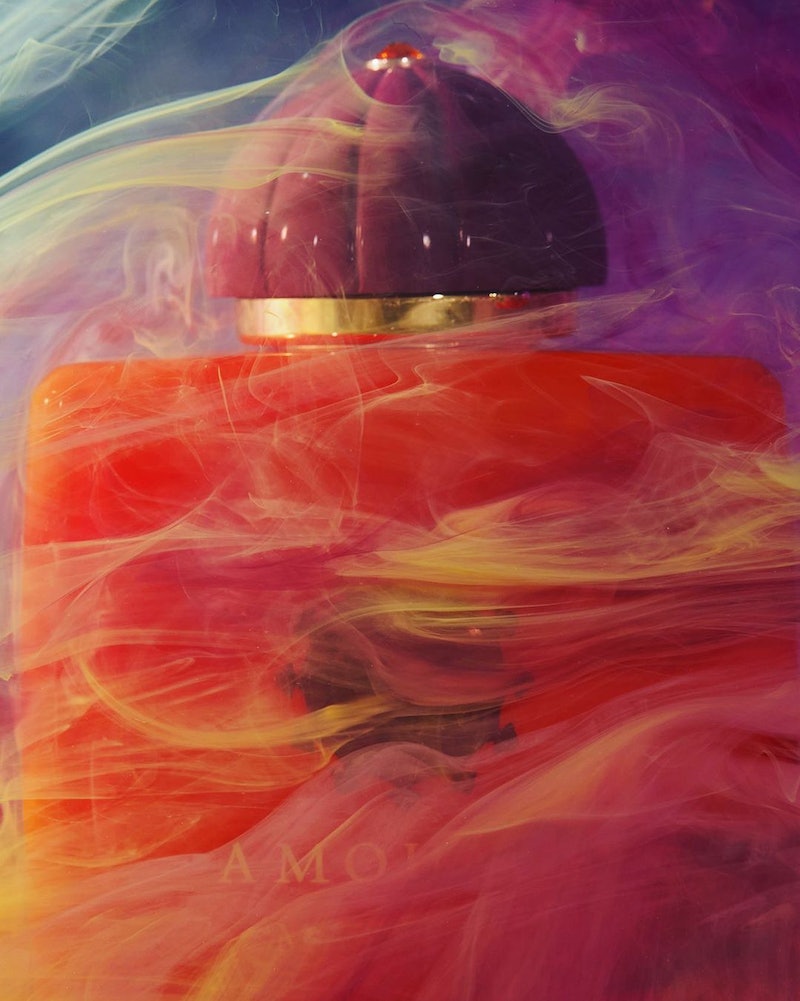 Fragrance-loving New Yorkers will never forget the era in their city’s olfactory history when Santal 33 wafted off every other person walking down the sidewalk. Those Le Labo-scented masses might have prided themselves on being at the pulsing heart of the city’s scent zeitgeist, but elsewhere in the world, being identified by scent is a fragrance nightmare come to life. In parts of the Middle East where the sophisticated Arab style of perfumery thrives, individuality is everything. Hoping to establish a more dynamic and individualistic fragrance fingerprint, I’m taking a few cues from their popular fragrance rituals.

Fragrance is an intrinsic and vital part of daily life in most of the countries that make up the GCC (Gulf Cooperation Council) region, including the United Arab Emirates, Bahrain, Kuwait, Oman, Qatar, and Saudi Arabia. The perfume culture within the region varies and is in no way monolithic, but there are commonalities that unite them.

Perfumes are an essential part of the grooming routines of both men and women here, as well as an indicator of cleanliness and good taste. Most fragrances and notes, including bold florals and animalic ouds, are considered unisex. Scents are used in multiple formats and styles, most often layered over one another, and wearing one single fragrance isn’t a typical practice. Regional fragrance houses such as Ajmal, Amouage and Abdul Samad Al Qurashi have juices with powerful personality and longevity that leave a hefty silage, and local brands offer scents at every price point. Trays of scents are even offered in traditional homes so guests can perfume themselves as gestures of goodwill, and homes and clothes are fragranced with incense-like smoke known as bakhoor.

Generosity is a big part of Middle Eastern culture, and one way of showing that largess is through perfume. “A big reason why people are into fragrance is to make others feel that you’ve taken an effort to wear something nice for them,” says Mona Kattan, the Dubai-based co-founder and global president of Huda Beauty and perfume brand Kayali. “We believe everywhere you go, you should leave things better than you found them, and leaving behind a trail of fragrance signifies that.”

“The GCC is a very distinct and unique cultural landscape when it comes to perfume because of the role it plays in society, but also the role it plays in defining an individual,” says perfumer Rawya Catto, general manager for CPL Aromas Middle East, a fragrance house based in Dubai. Catto, who has over a decade of experience in the region, explains individuality in fragrance is vital for women because clothing choices in public are restricted and cannot be a defining feature. Women in countries like Saudi Arabia are required to wear a black abaya outside the home, and often have their faces veiled. “The one thing they have [to show personality] is fragrance. Your scent is a distinct element of your individuality,” she says.

Creating Your Signature Scent In The Gulf

The process behind crafting a persona out of perfume is in itself a self-care ritual which focuses on layering scented oils — or attars — and eau de parfums. “In the Gulf, people are more likely to try different brands and develop a full wardrobe of fragrances, instead of sticking to one signature scent,” says Michaela Somerville, beauty editor at Vogue Arabia. Kattan says women start building their unique scent signatures by layering on a fragranced body lotion or balm after a shower. Then comes a musk oil — Musk Tahara is a popular choice. “Musk makes you smell clean and help fragrance stay on longer, so it’s great base for whatever’s to come after that,” says Kattan.

Next, oud oil is dotted onto heat points — at the pulse on the wrist and behind the ears — and will linger all day. Kattan makes sure to apply some on her shoulders before Arab parties, as touching shoulders and kissing cheeks are common practice. (Men greet close male friends and relatives by touching noses, so oud oil is often dabbed on noses.) Hair retains aromas that waft out with every movement, so perfuming the hair is a key step, either with the same body oils or with hair mists. Then begins the creative part — spraying on eau de parfum after eau de parfum. Most people average around three or four different perfumes; Kattan says she easily mists on close to fifteen, and this last step is often repeated multiple times a day.

What will not earn you brownie points, however, is trying to guess what scents and oils someone’s mix is composed of. “Normally, on the street when you smell La Vie est Belle, you know immediately what it is because everybody is wearing [it]. But [in the Gulf] they layer it with oils, to make sure other people don’t recognize what they’re wearing,” says Hamid Merati-Kashani, a Dubai-based principal perfumer at Firmenich. If a mix is easily guessed, its composer goes back to the drawing board to spritz up a more elusive olfactory story.

The body isn’t the only vehicle for scent, and clothes, too, are perfumed. The most popular way to do that is through bakhoor (the Arabic word translates to ‘smoke’), a practice that involves burning chips of oud wood on portable charcoal burners (electric ones are now available) and letting the smoke waft over the clothes. Bakhoor illustrates how fragrance signatures are unique to each family. Some bakhoors have been in families for decades and are only lit on special occasions, while those of lesser quality are used daily. Families embark on bakhoor buying expeditions before weddings or religious holidays like Eid, sitting in specialized stores for hours and sampling wood chips that are burnt to release their aromas. Guests at weddings are greeted by ladies in waiting bearing the best bakhoors to anoint them on arrival.

The Middle East’s Contribution To Perfumery

Unfortunately, the Western world often overlooks the intricacies, cultural value, and historic importance of these customs and practices. Scent innovation is often viewed from a Eurocentric perspective, when in reality, the Islamic world’s contribution to perfume has been immense. During the Islamic Golden Age, which began in the 8th century, steam distillation was invented via the alembic still (it’s still used to make essential oils today), by master chemist Jabir ibn Hayyan. Arab chemists have written books on perfume-making detailing hundreds of recipes and tools, dating back as early as the 9th century. Exposure to a wide variety of woods, resins, and spices became possible through trade routes with Asia, which were paired together in exotic combinations still popular today.

Today, the region’s only contribution to perfume culture is thought to be the popularization of oud the world over. Oud, or oudh, was first introduced to the Gulf via trade with India, and is created when agarwood trees become contaminated with mold and produce a fragrant resin that embeds in the bark. The ingredient is endangered in the wild, the supply and quality has been dipping for almost a decade, while prices continue to rise astronomically. (Ajmal Perfumes’ most expensive oud oil is about $2,800 for 10 ml.)

Despite that, it enjoys worldwide popularity, (though many commercial fragrances name-checking oud don’t contain any, but replicate the scent through woody and smoky notes). True oud is animalic and “it smells sickeningly fermented, almost goat-like,” says Catto. To note: it’s not uncommon in the perfume industry to have ingredients that smell repulsive when they’re inhaled undiluted or not tempered with others; jasmine is notoriously described as the scent of decay in concentrated doses.

The accords that create hitmakers in the Gulf do include oud, but aren’t limited to it exclusively. “It’s restrictive to think of fragrance here as oud only — there’s a big musk culture, a big rose culture,” says Catto. Leathery notes do well, amber is super popular, as are sandalwood, saffron and vanilla, and frankincense is having a bit of a moment. “But unlike the Levant and other areas of the Middle East, they stay away from big white florals. You’d rarely see jasmine in a GCC fragrance,” she says.

Perfumers say that the average consumer in the Gulf has a sophisticated and discerning nose. “They know the ingredients and are not afraid to mix,” says Merati-Kashani. The punch of a juice is of prime importance (“they really like when a fragrance is strong and intense”), and longevity is a concern, too.

This obsession for fragrance combined with a high purchasing power means Western brands have long targeted this market, often with mixed results. “In general, growth is flat in developed markets, while in the Middle East, there’s dynamic double digit growth each year, and everyone wants to piggyback on that,” says Catto. There are innumerable fragrances launched as limited editions or regional exclusives in the Middle East before they’re rolled out in the rest of the world.

Fragrance experts are quick to note that sometimes those launches are unique, created in collaboration with local perfumers, and vibe harmoniously with the fragrance culture of the Gulf. Others are nothing more than a touch of oud added to basic floral fragrances, with a ‘Middle East exclusive’ label slapped on in a thinly veiled act of appropriation and a blatant cash grab. “I prefer brands which have put in the time and effort to create a story around their launch,” says Somerville.

One of those is Diptyque, a fragrance house inspired by the love of travel. In a new juice launching mid-June, Eau Rihla, named for the Arabic word that means both the record of a journey and the journey itself, is the latest in a long line of fragrances inspired by the Middle East. Legendary Moroccan explorer Ibn Battua was on perfumer Fabrice Pellegrin’s moodboard for this one. “I wanted to capture the smell of travel, embodied by a classic, traditional steamer trunk, the leathery notes of [which are] enriched by the voyage across the Middle East: leathery, ambery, woody and spicy,” says Pellegrin. A rich leather base note is crafted with a Middle Eastern audience in mind. “The specific, unique leather note, Cedro Cuir is a high-quality note recalling the softest and most downy part of the leather.”

Houses that previously had successful launches in the Middle East include Dior, which has interwoven the codes of their perfume traditions into those of the region. The resultant scents, part of La Collection Privée, Oud Ispahan, Purple Oud, and Oud Rosewood, have been incredible olfactory and commercial triumphs. Similarly successful are Louis Vuitton’s Ombre Nomade, Les Sables Roses and Nuit de Feu. “It shows when brands have gone the extra mile to have worked and studied and sourced the right ingredients and celebrated them. People are happy to see these luxury brands understand their market and cater to it,” says Catto.

Until I can get my hands on some true blue Arab fragrances, below, I’ll be layering some oils and EDPs with Santal 33 to determine if any sharp-nosed New Yorkers can still detect it on me, too.

Mona Kattan loves this sensual floral and the chic flaçon from this Omani brand.

Perfumer Rawya Catto says this is the definition of amber for her, the quintessential dry amber note. Unfortunately it doesn’t ship to the U.S., but add it to a dream wishlist for perfume shopping in the Gulf.

This amber vanilla is an iconic fragrance from that part of the world, according to Catto, and it’s one of Hamid Merati-Kashani’s favorites as well.

Somerville is into this woody rose spiced with chili and saffron which feels Arabic without being an oud overdose.