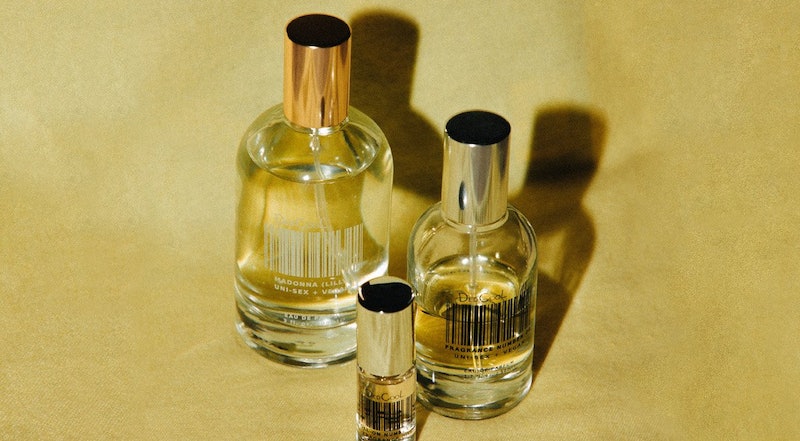 Perfume is confusing. Sure, smelling something is pretty straightforward — but that's just the very first hurdle when shopping for a new scent. From note names that read like a botany textbook to understanding how perfume notes work in general, even in-person fragrance browsing can quickly devolve into wafting coffee beans for help as you grip a handful of perfume-streaked blotter papers. (And who even knows how to pronounce labdanum without looking it up, let alone what it smells like?)

"When perfumers refer to notes, it’s like notes in music — it’s the elements that come together to compose the fragrance’s formula," Olivier Gillotin, Master Perfumer and the creative mind behind Ralph Lauren Fragrances’ new Polo Red Eau de Parfum, tells The Zoe Report via email. "The notes in fragrance are often more descriptive than music. When we refer to a rosy note, a green note, or a fruity note, those can be real accords of different products all composing a singular note."

And like a symphony, experts have to layer them together in a certain way to create a product where each one can shine. Ahead, how perfumes are broken down, which perfume note lasts the longest, and how to shop for a scent when even your own skin changes how a perfume smells.

"When composing scents, there are descriptors that are separated into a three-tier pyramid: top, middle, and bottom. The notes represent what will be sensed on fragrance application," says Carina Chaz, founder of the clean fragrance brand DedCool. "The top note will be sensed on initial applications. As the scents dry down, the fragrance composition will slowly uncover the heart (middle) and base notes."

"Think of [top notes] as the first thing that hits you. Sometimes these are called the opening notes or head notes. This is often a note that dissipates and doesn’t last on the skin," adds Pacifica founder and CEO, Brook Harvey-Taylor. "It’s the teaser, what draws you in." Nonetheless, Harvey-Taylor says that a top note can "define the entire fragrance," since they're the very first scent you recognize upon application — a memorable feat.

Meanwhile, the heart or middle note "is the fragrance," according to Harvey-Taylor. "The middle note lasts longer than the top note and is most interesting when it plays the peacemaker, when it balances the tension between the top note and the base note. That is when the heart is magic," she explains. "It is the true structure of the scent and is the second defining moment. It lingers on top of the base note while it pulls in the top, until it finally fades." (Which can take quite some time, depending on your scent; Gillotin notes that Polo Red Eau de Parfum's lavender middle note "comes through quickly and lasts around three hours," while "the cistus absolu can be detected after two hours and can last two days.")

Which Perfume Note Lasts The Longest?

It comes as no surprise that the base note is often the one that'll stick around on your skin long after others have faded away. "This is the foundation of the scent and will have a lasting power of six-plus hours, depending on the eau de parfum," says Chaz. You also might hear this finishing scent referred to as the drydown, which Gillotin says is "what we call it once the fragrance has settled on the skin."

Although now you know to pay special attention to the base note of any perfume you buy, you might be wondering about the staying power of certain fragrance notes in particular — as in, do delicate florals poof into the wind quicker than hearty, musky scents?

Gillotin says there are notes that will last longer than others, such as ylang ylang outlasting bergamot, which in turn can outlast lemon and grapefruit. However, the perfumer adds that "you should not concentrate on one or two notes, but on the harmony of the fragrance. A fragrance plays with the mood and should make you feel happy or sexy along with a range of other emotions. The fragrance needs a feel-good aspect that inspires you personally."

According to Chaz, your go-to scent's staying power is more about the fragrance concentration than whichever flower or fruit was used. "It’s very much dependent on the percent levels of each note and how much water is present in the composition," she explains. "Traditional eau de parfum has about 12 to 15 percent, as opposed to eau de toilettes that have about seven to 12 percent."

Why Does Perfume Smell Different On Everyone?

That rumor you've always heard about fragrances is true: A scent can be genuinely altered by your body's chemistry. Gillotin says that the glands beneath skin are reactive to your environment, and that your own unique pH level — "ranging in acidity from zero to 14" — plays a role as well. "The less acidic your skin is, the more the sensuous drydown comes out. As we create a fragrance, we cannot obtain a universal response, but we try to have a fragrance which works well on all skin, even if the olfactive result is different," he says.

"You know how sometimes you smell a scent and you are like, 'hmm, I sort of like it, but...' and you keep returning to it, not sure if you like it or not?" adds Harvey-Taylor. "That is often a sign that the top note isn’t your favorite top note, but you are smelling through it to the heart. In this case, try it on and smell the scent on your skin. It may vibe with your skin in a totally different way."

How Do Perfume Notes Work For Fragrance Oils?

Prefer dotting on a beautifully scented oil than spritzing on a perfume? Get ready for one more lesson. "I think the biggest difference with alcohol- verse oil-based fragrance is longevity," says Terri Foster, founder of Blade + Bloom. "The alcohol-based sprays are stronger initially, evaporate quickly, but can have more complex scents due to their chemical makeup."

And while the note structure is the same according to Foster, alcohol-based sprays reach drydown faster simply because of that evaporation speed. So, when debating your next big fragrance oil splurge, you need to be even more patient as you test it out. "When you buy any fragrance, it’s usually based on the top note since it’s the first thing you smell," Foster adds. "We’ve all heard you should walk around and see how the fragrance reacts and changes over time, but most people don’t do that. It’s the first impression that sells us."