The experts say it’s not just you. 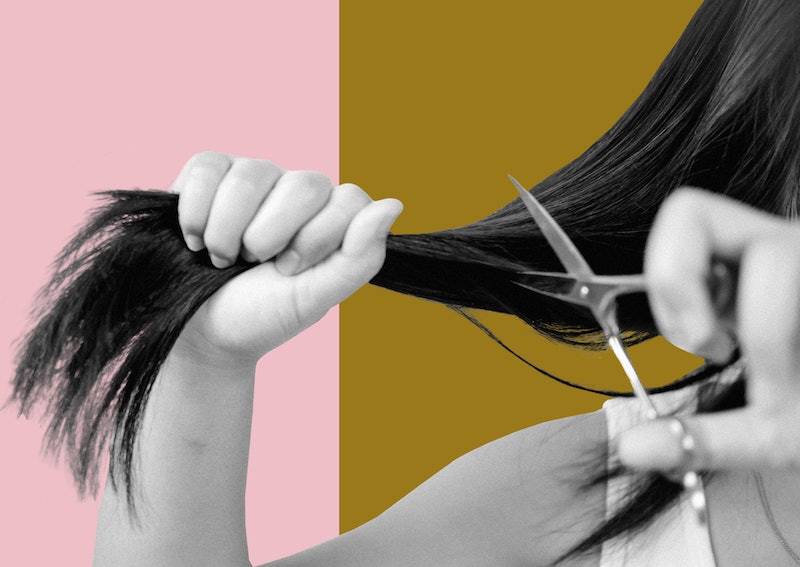 It’s a well-worn, almost comical movie trope: Girl gets dumped (or suffers another massive life upheaval), girl stares into mirror with grim determination, girl hacks off a chunk of hair with scissors, girl tearfully smiles while holding shorn hair as inspiring music swells. In the fictional world, the meltdown makeover is a form of empowerment — a symbolic show of rebirth, of taking back control of your identity. In the real world, these types of major aesthetic makeovers, spurred by emotional duress do happen, but it’s not always a clear cut story of female empowerment — many times, it’s a coping strategy for serious mental and emotional trauma. And in 2020 especially, it seemed like many people dealt with the pandemic’s stress and anxiety with a drastic hair change.

“From birth, there is this message that if you can control your body, you feel more self-esteem and better about yourself,” says Dr. Ann Kearney-Cooke, a psychologist and body image and eating disorders expert in Cincinnati, Ohio. “When things feel out of control, people will often try to change their body or their look because it’s something they feel like they can [have control over].” Emily*, a 38-year-old writer in Kansas City, Missouri, can relate to that mentality. “Changing my hair gives me something to focus on other than whatever shitty thing is happening in my life,” she says. “I went red after a really dramatic breakup and stayed that way for a decade, until I had a miscarriage and bleached the hell out of it. It always helps my mood to feel like I look good, too.”

And if society’s mood has ever needed a boost, it’s now. The pandemic has taken even the most emotionally stable and thrown them into a tailspin of anxiety, stress, burnout, boredom, loneliness, and stagnation. “This has been a terrible year for the mental health of Americans,” agrees Dr. Kearney-Cooke. “You have people feeling like they can’t control anything — if they get the virus, if their loved ones get the virus, if they lose their jobs. I saw many of my patients going to the hair salon because it made them feel good and [helped regain a sense of control].”

Notes Kim Kimble, celebrity hairstylist and owner of Kimble Hair Studio in West Hollywood, “Throughout the pandemic people have made very harsh decisions because of stress. Hair was something people could control in a moment in time where there was absolutely no control. If you pair that with the monotony of looking at your hair every day, you get rash decisions.”

That resulted in some people taking matters into their own hands during lockdown. “I'm used to getting fairly regular haircuts, so by May 2020 my hair was getting long and the ends were stringy,” says Emily*, “I had also come to realize I was pretty much living in Groundhog Day, but with anxiety, which isn't great for a person with ADHD — I need constant change, I need excitement. I'd been watching the second season of Dead to Me and was obsessed with Linda Cardellini's bangs; I decided I had to give myself bangs, like right that minute. I had bangs all throughout my twenties and often trimmed them myself in between visits to my stylist, so I opened a bottle of rosé, grabbed a blunt, rusty hair razor and gave myself some passable curtain bangs.”

For the less adventurous, they waited for salons across the country to re-open before flocking to their colorists and stylists en masse with visions of hair transformations dancing in their brains. Says Liz Rim, lead hairstylist at IGK Salon in SoHo, New York, “People that want a dramatic change with their hair are usually going through something. Even before the pandemic, they would come in when a relationship was done, or a new chapter in their life was starting. Pre-pandemic it was probably one out of a hundred. During the pandemic I would say about one out of three people want a change.”

Adds Richy Kandasamy, colorist and R+Co Collective Member, “I have seen a lot of clients coming back to the salon going through [stressful situations]. Some won’t tell you, but the energy they come into the salon with and the demand and eagerness to change their hair color is a direct message. At least one a day to be honest.”

Many of those clients are giving up their signature looks and going for a complete 180 in their overall vibe. Hey, if Billie Eilish can ditch the green roots for all-over platinum, what’s to stop you from chopping off your long locks into a bob? Says Rim, “Because of all these [pandemic-related] changes, I think we’ve had a lot of time to think on what we want to change and what we see as important – both mentally and physically. I think people want to test out what their iconic look could be.” For her, she’s seen an uptick in graphic cuts like bobs and lobs, as well as Birkin bangs and shaggier styles.

Kimble, on the other hand, has noticed an increase in clients requesting short hair at her salons. “I see people wanting a major hair chop. There's a connection with [that kind of cut] and disconnecting yourself from any negative energy because a lot of people believe hair has a connection with energy. When people change their lives, they want a new look to represent the new person they are becoming.”

On the color front, Kandasamy says blondes at all ends of the spectrum have been big for him, something he credits to the Zoom boom. “Clients are spending more time on their [devices] and their face is always exposed, so I’m seeing a lot of attention around face framing or contouring with lighter and brighter blonde tones,” he says. “Champagne blonde highlights, classic and seamless highlights, or balayage techniques with cinnamon brown to warm honey hues. After this dark and tough pandemic season they want to bring lightness, brightness, warmth, and positivity back into their day-to-day life by embracing a new, positive change.” He also notes that clients are experimenting with more creative tones. “I have a lot of clients after the pandemic wanting big changes and becoming more flexible to try new color palettes since they are not at corporate offices anymore. The color trend for spring 2021 will inspire clients to be more creative and playful with the tones – think more pastels and bolder shades.”

Jenna Perry, a celebrity stylist in NYC, says drastic color changes have been on the rise in her salon as well, with red and blonde leading the charge. “Everyone is seeking reinvention and a major change by rebranding ourselves,” she says. “Right now, everyone is coloring their hair a shade of red. It’s dramatic and very daring, it stands out in a crowd, and it’s also incredibly sexy.”

But, says Dr. Kearney-Cooke, negative emotions aren’t the only psychological response that’s driving the meltdown makeover. “During the lockdown, nothing was changing, people were bored and that boredom played a role in anxiety [and] in depression,” she says. “We had most of the things that brought us pleasure taken away. There’s a pleasure pathway in the brain and if we don’t get the pleasure that we need from life, we can turn to unhealthy habits like [overconsumption of] food and alcohol. When you get your hair done, that’s fun, that’s pleasurable, and you miss that pleasure.”

For Colleen*, a publicist in Orange County, California, the lockdown had left her burnt out and disengaged from her daily life. “I was feeling like I was not putting enough time and effort into my own self-care. I wasn’t investing in myself or things that make me happy because not many people saw me outside of my Zoom calls — so was it necessary to pay for extensions and hair color I needed to maintain? I was also in a relationship that felt comfortable to me but wasn’t truly where I wanted to be if I was truly honest with myself. The pandemic played a major role in where I was both emotionally and mentally, especially as we hit the one year mark.”

After recognizing how the monotony was affecting her, she made the decision to hit the salon for a soft blonde color and 22-inch Natural Beaded Row hair extensions, which had an instant effect on her mood. “I honestly couldn’t believe the person I was looking at in the mirror was me! I felt so beautiful and could tell mentally I was flipping on a positive switch the moment my stylist showed me the final look. I felt such relief and that helped alleviate my anxiety and improve my happiness drastically.”

That’s not to say that a new hair look will suddenly fix all your mental health issues and magically erase the hellscape of a year everyone has endured. As Emily notes, “Just like any cosmetic change, my bangs were very exciting for awhile. I mean, I was in a place where I was picking fights with my husband just to feel something other than my pandemic anxiety. Eventually, like bangs often do when you're not styling your hair every day, they became an annoyance. As I grew out my bangs, I dyed the ends of my hair pink. Eventually I grew tired of that, too and had to bleach and tone my hair, like, seven times to get it all out. But again, it was something other than my anxiety to fixate on. And it's just hair. It will always grow back or grow out.”

Still, having that distraction and something to look forward to has been a salve for many who were longing to feel something — anything — in the midst of what felt like an unending cycle of “What are we going to do today? Oh, the same thing we did yesterday — stay inside and not see anyone or do anything. Cool.”

Now, as vaccines slowly start to roll out and society begins to experience a wholly unfamiliar sensation — hope — some stylists say that clients are coming to them for a different kind of pandemic makeover. “You have people coming out of lockdown thinking that they haven’t really been seen in a year and they are reinventing themselves to be someone new,” says Jon Reyman, stylist and owner of Spoke & Weal salons. “It’s a ‘here I am, and now I get to choose where I want to go and maybe create a whole new conversation [about me].’ People are bringing themselves back into the sunlight, so to speak, and there’s this element of reintegrating back into the world and wanting to make sure that they are presenting themselves the way that they want.” So, now the question becomes, who do you want to be when the world opens back up?