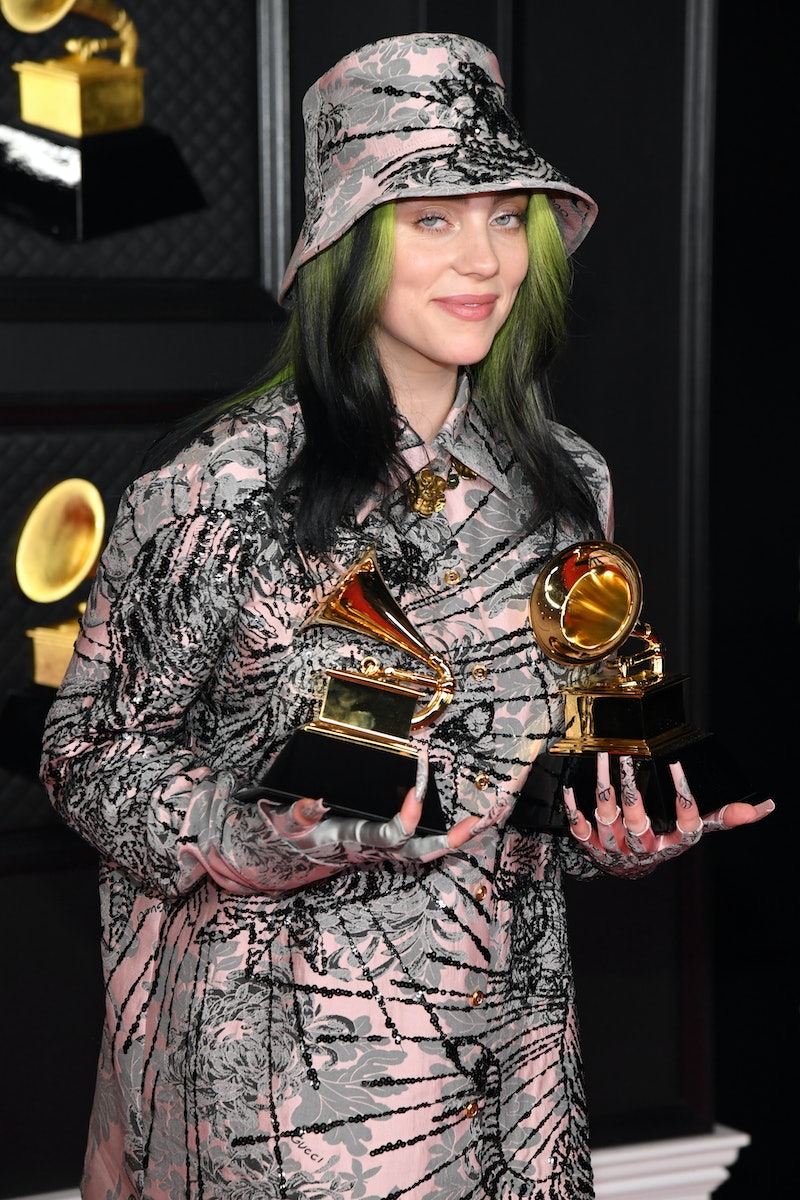 Although nobody could’ve guessed it a few days ago, it appears as if the 2021 Grammy Awards show was the last big hoorah for Billie Eilish and her iconic neon green and black hair. Following a March 17 Instagram story teasing fans with the caption “Can you guess what color?” the artist revealed that she was, indeed, talking about her hair — and it’s not a change fans could’ve expected. Billie Eilish now has blonde hair, and the musician’s 77.7 million IG followers are very into it.

As in, the pic Eilish posted of her new platinum look garnered more than one million likes in less than 10 minutes. Meanwhile, the initial video reveal, where Eilish flips onto camera Little Mermaid style, is currently sitting at more than nine million views and 100,000 comments. And honestly, it’s very merited: According to Refinery29’s Thatiana Diaz, Eilish first debuted her oh-so recognizable black hair and green roots in the summer of 2019. While there have been other colors, this old-school blonde is a big leap from the silvery blues and neon highlights.

After all, it’s the vintage flair that makes it such a different look. Eilish not only has bleach blonde hair, but she also now sports on-trend curtain bangs in the photo, while the video reveal shows her wearing a vintage-looking cardigan set to big band music. There is a hint of gold to the superstar’s hair, as well as volume and texture woven into the shaggy, feathered layers.

Unsurprisingly, Eilish and her circle seem super into the new look. “Pinch me,” Eilish captioned her second IG post featuring the blonde hair. Fellow musician and co-founder of the hair brand Good Dye Young Hayley Williams shared a photo of Eilish on her Story with the caption: "CMON WITH UR AFTER LAUGHTER ERA!! Lil punk rock blonde bil.”

For those that don’t speak pop music, an ‘era’ can refer to different album cycles and aesthetics a musician goes through — so for Eilish, it might now be all things vintage, jazz, and Marilyn Monroe blonde. Only time will tell.