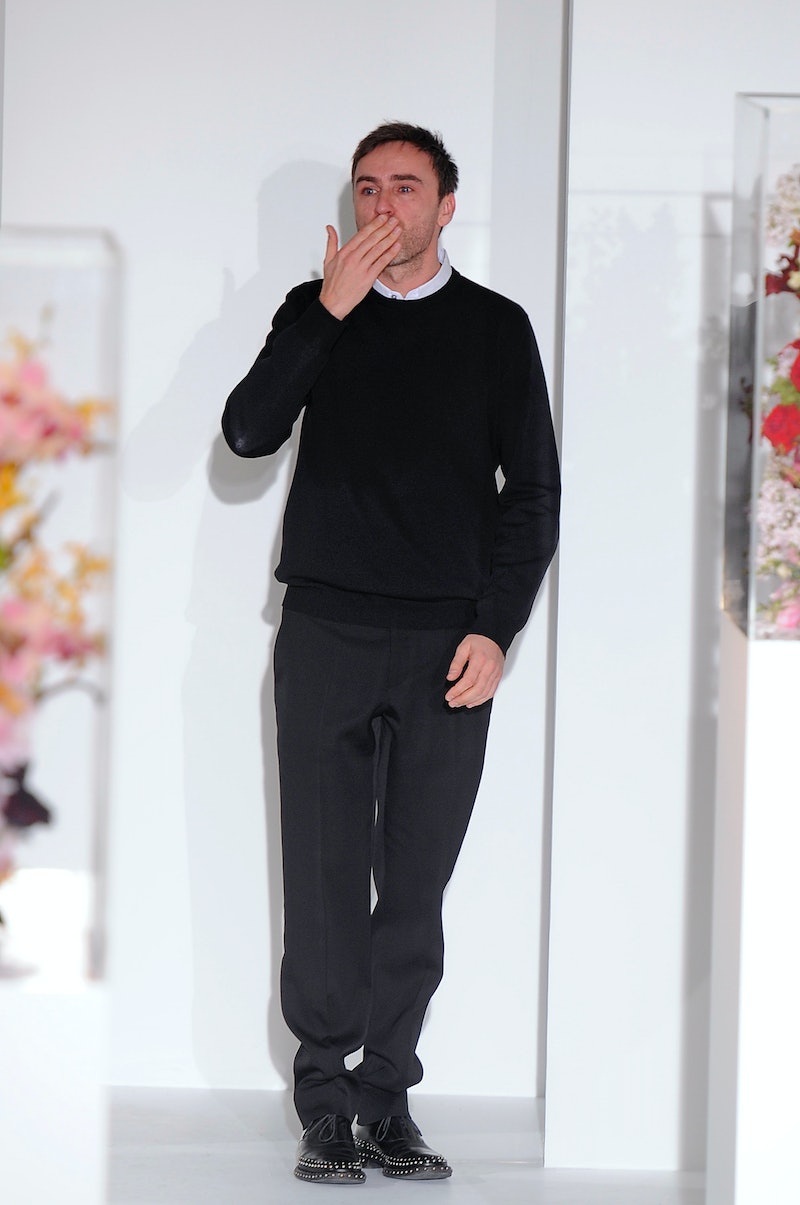 When news broke back on Feb. 23 that Raf Simons was appointed co-creative director of Prada, the exciting move for the brand was shared across social media, and was the chatter among fashion insiders for weeks. Though perhaps not a household name, Raf Simons' career is full of notable fashion moments. Seven months after the original announcement, the moment the industry has been patiently waiting for is just hours away: On Sept. 24, Simons will show his first co-designed collection for Prada, live streamed from Milan Fashion Week. While Miuccia Prada is, of course, responsible for the brand's lauded heritage, Simons' arrival has many anticipating an exciting new chapter for the Italian fashion powerhouse.

Simons first began as a furniture designer, but launched his eponymous menswear label in 1995 after interning for notable Belgian designer Walter Van Beirendonck. "‘Actually, nothing ever started with me in relation to fashion," Simons told Vanity Fair in 2017. "Things started in relation to art and design and film and music. Fashion is the last thing that came in." From the beginning, Simons has approached designing in a cerebral way — often drawing on concepts well outside of the industry to inform the world he creates around each collection.

The same year his label marked its 10 year anniversary in 2005, Simons joined Jil Sander, designing menswear, but also for the first time women's clothing as well. During his days at Jil Sander, Simons didn't alter the brand's minimalist vibe, but he also wasn't timid about adding in his signature vibrant hues and intriguing silhouettes. For the Spring/Summer 2008 collection, Simons focused on color blocking, combining blinding bright orange and pink ready-to-wear separates with punches of navy blue. Though he earned accolades throughout his seven years with the brand, he was arguably best known for its bright maxi skirt looks that made an appearance in the Spring/Summer 2011 collection (below). The Fall/Winter 2012 collection would be his last with the brand.

After departing Jil Sander, Simons was appointed as creative director at Dior in 2012, taking the helm from John Galliano. The first day on the job, Simons had just eight weeks to produce the Fall 2012 Haute Couture collection. His debut was later turned into the documentary Dior And I in 2014. His intense passion, yet calm demeanor was captured through the lens, offering an insider's view into what it takes to create a couture line (at Dior he was showing six collections a year including cruise, pre-fall, haute couture, and spring and fall ready-to-wear).

With Simons at the helm of the brand, Dior (which doesn't typically stray far from its DNA) became a bit more modernized, reimagining the demure dresses along with the brand's iconic bar jacket. During his tenure at the brand, perhaps Simons' most talked about look is the deconstructed suits detailed with lace on the sides shown in the Fall/Winter 2014 collection.

In addition to critical acclaim, Simons found fans in the celebrity realm. For the 85th Academy Awards in 2013, Jennifer Lawrence won the Oscar for best actress dressed in a baby pink ball gown (yes, which she gracefully tripped on while accepting her award) straight from Dior's Spring 2013 Couture collection. Emma Roberts, Lupita Nyong'o, Charlize Theron, and Natalie Portman were just a few of the A-listers who gravitated towards the modern elegance that Simons offered. After a three-year stint at Dior, his exit from the brand in 2015 made Simons an internet sensation. According to Vogue, Raf Simons was the Google's number one trending designer of 2015.

Prior to his latest role joining Prada in early 2020, Simons was named as Calvin Klein's creative director from 2016 to 2018. This news came as a surprise to some, as his history crafting couture lines and feminine ready-to-wear didn't exactly mesh seamlessly with the brand's relaxed roots. But, his distinct, fresh approach to the American design house caught the attention of the industry. At CK (whose ready-to-wear line he renamed Calvin Klein 205W39NYC in homage to the brand's New York address), he wowed the world with Jaws references for Spring/Summer 2019, his partnership with the Andy Warhol Foundation, and his advertising campaign with the Kardashian clan. In June 2017, Simons was recognized as designer of the year (for both men and women) from the CFDA for his work at Calvin Klein.

As an integral part of his 25-year career in the fashion industry, his own line, Raf Simons, shouldn't be ignored. "Fuelled by his love for both rebellious youth cultures and traditional menswear, he emerges in fashion halfway through the nineties, presenting a radically different image of masculinity," the label's website states. His line has influenced menswear today, particularly with its black skinny suit. And Simons has even more exciting news: His line is expanding to womenswear. Vogue reports the womenswear line is set to be revealed on Oct. 23, presented alongside his Spring/Summer 2021 menswear line.

Now that you have some history on the immensely successful life of Raf Simons, be sure to check back for Prada's Summer/Spring 2021 review on The Zoe Report after the show.