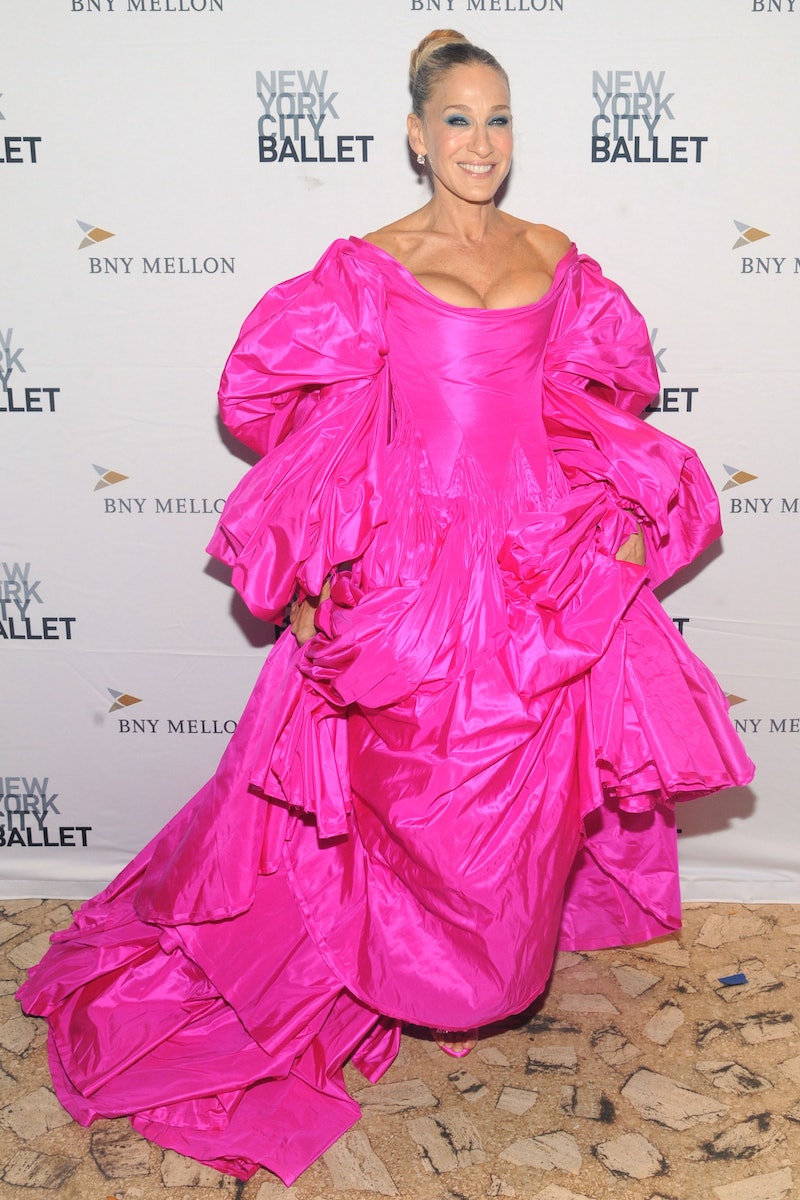 Instagram comes in handy for a plethora of things, but one thing, in particular, that users love about the social-sharing app is that it serves as a treasure trove of fashion inspiration. Celebs and influencers alike are constantly serving up inspo for your next outfit. However, the latest styling tip is courtesy of Sarah Jessica Parker's feed, and it tackles the tricky sartorial situation of wearing socks with heels. Hint: It's a lot easier than you think, so before writing off the pairing entirely, take a look at how the actor sported the unexpected footwear trend.

SJP has channeled her inner Carrie Bradshaw more than a handful of times in recent years, and if the past is any indication, she's not going to stop emulating the TV icon anytime soon. Lots of glitz, pretty tulle skirts, and chic shoe pairings have become as distinctive to the actor's real-life wardrobe as they were to Bradshaw's — and her recent looks are perhaps the best proof the latter.

You might have noticed a particular trend popping up on Parker's feed as of late: wearing socks with heels. But before you let the idea of the combo scare you away, take a look at exactly how she managed to pull off the playful pairing with ease.

On Oct. 22, SJP took to her Instagram to share a snap of herself shortly before heading out to an event. "Buckled up for the last official engagement in Australia," she captioned the photo. "Heading over to Highpoint, followed by yet another much anticipated dinner in Melbourne. Night time card games to follow." Her long, blonde tresses shined oh-so-bright in the photo, but ultimately, it was her black Mary Jane pumps from her eponymous shoe line and those purple glittering Vetements socks that stole the show.

A few days earlier, SJP posted a simliar picture, once again sporting the unexpected footwear trend. She wore the same Mary Jane pumps, though this time in a luxe gold color way, with knee-high Gucci socks. Clearly, Parker has a thing for the classic shoe style and designer socks — and she's going to inspire you to get on board the craze, stat.

Wearing socks with heels is actually much easier than you think, though SJP's take (read: Mary Janes with statement socks) is one that's particularly easy to emulate, not to mention it's quite comfortable, as well.

The best thing about this pairing is that you're able to extend the lifecycle of your heels because you can actually wear them in the fall. Just slip on a pair of socks for extra warmth, and you're good to go.

Here are The Zoe Report's favorite socks to wear with your heels this season. Shop the styles that would definitely earn SJP's stamp of approval, below.