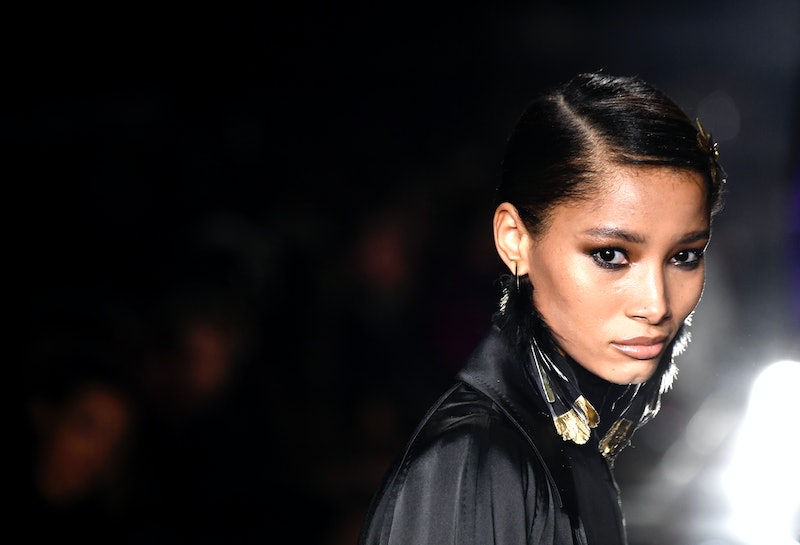 This year was quite the switch up for Tom Ford. As New York Fashion Week commenced on Feb. 7, the designer hosted his latest collection presentation on the other side of the country in sunny Los Angeles. Yes, for Tom Ford's Fall/Winter 2020 show, he decided to pay homage to the city he calls home (part-time anyway) — in more ways than one. In addition to the airy, casual styles synonymous with West Coast living, the designer conjured a dewy, glowy beauty look that also felt decidedly California.

To complement the effortless sheen, Kendal went for a gilded, bronze eye look. "I'm using the Tom Ford pencil in brown to line the top of the lid [crease] in the contour and blending it out," explains the makeup artist. To fill in the lid and , Kendal customized each model's look with shades from the brand's Eye Quad in Body Heat to deliver a subtle shimmery brown that read bare and neutral, blending up past the crease. In the center of the lid, Kendal packed on a bright gold shadow to make the eyes pop and glisten. "We're dusting the gold eye shadow underneath the eye, too," says the makeup pro. "So it's one of those makeup looks that's sort of layering, starting with the pencil, then the eye shadow, then go over it with the gold." She then topped things off (literally) with black eyeliner along the inside of the waterline and across the top of the lid, blending it out for some sultry smolder. Mascara was swiped on top on bottom lashes to open up the eyes.

With the skin left bare and radiant and the heavy metal eyes doing most of the talking, the lips were also more subdued, requiring just a little bit of foundation and lip gloss.

Although one might expect a California-inspired hairstyle to include soft beachy waves or loose plaits, Ford went sleek with tight French twist buns that read very Julia Roberts in Pretty Woman. Lead stylist Duffy described the look as "masculine, tight, tailored. The extreme side part is very boyish." The veteran hair pro explains that although the hair appears to be rolled, it's actually been folded into the nape of the neck to "emulate the look of a boy's haircut." Juxtaposing the masculine detail, was the floral accessory worn by every female model. To give the hair some grit to make it more shapeable, keep every hair in place, and retain the sleek shine, Duffy called on TIGI Bedhead's Queen For A Day Thickening Spray and Oribe Dry Texturizing Spray.

Minimal makeup and a possible new hair trend in our midst? Tom Ford continuously builds and evolves the picture of a strong, independent woman, and the Fall/Winter 2020 presentation was no exception.