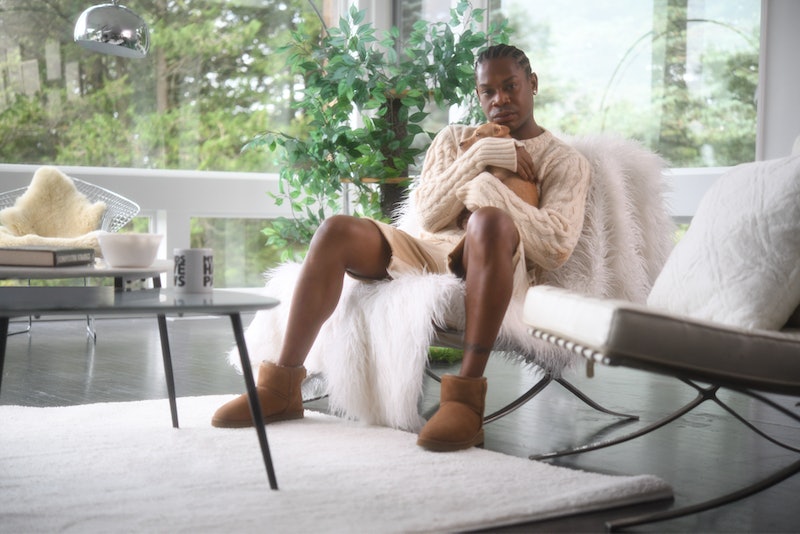 "When you make clothes, at the end of the day, you're touching people. You're all over people's bodies," said Telfar Clemens in a new Instagram video. His namesake brand, TELFAR's explosive tote bags have become the most sought-after fashion item of quarantine. "If I'm going to touch people, I want them to feel good." In the video, Clemens indulgently wears a pair of boots from UGG, the official off-duty footwear brand whose cloud-like shearling boots have been impossible for fashion people to break from over the years. As you can imagine, TELFAR x UGG's collaboration announcement has sent the internet into a total frenzy, with thousands readily counting the moments until its 2021 arrival.

On Sep. 17, the designer posted a campaign video to Instagram, rife with things that feel good — making breakfast at home, cuddling with puppies, and sketching al fresco, for instance. For Clemens, the endless appeal of the UGG silhouette bears a close resemblance to all of these things — hence, why it's been on his radar (and his runway) before. “I have made unofficial, unauthorized UGG boots in two shows already dating back to 2010," he said in the press release. "I’ve always been obsessed a certain kind of ubiquity and when something really unique ends up on everybody. What I want to do is get down to the DNA of UGG and see what genes we have in common. To get down to the core of that feeling.”

The film was part of UGG's "FEEL YOU." campaign, which highlights a series of creatives worldwide, all of whom have clearly defined identities and unbridled personalities. Parallel to its recent expansion into ready-to-wear, the partnership is another leap for the popular shoe brand — and it's sure to be a fruitful one.

“Telfar is exceptional; a true pioneer and visionary and one of the first designers to believe that being unapologetically yourself is sexy,” said President of Fashion Lifestyle at Deckers (UGG's parent company), Andrea O’Donnell. “At UGG, we believe in the same thing, and that fashion can be real, democratic and aspirational all at the same time. This collection will be the perfect expression of our shared beliefs.”

For more updates on the collab, including a finite launch date, keep eyes on TELFAR's Instagram page.