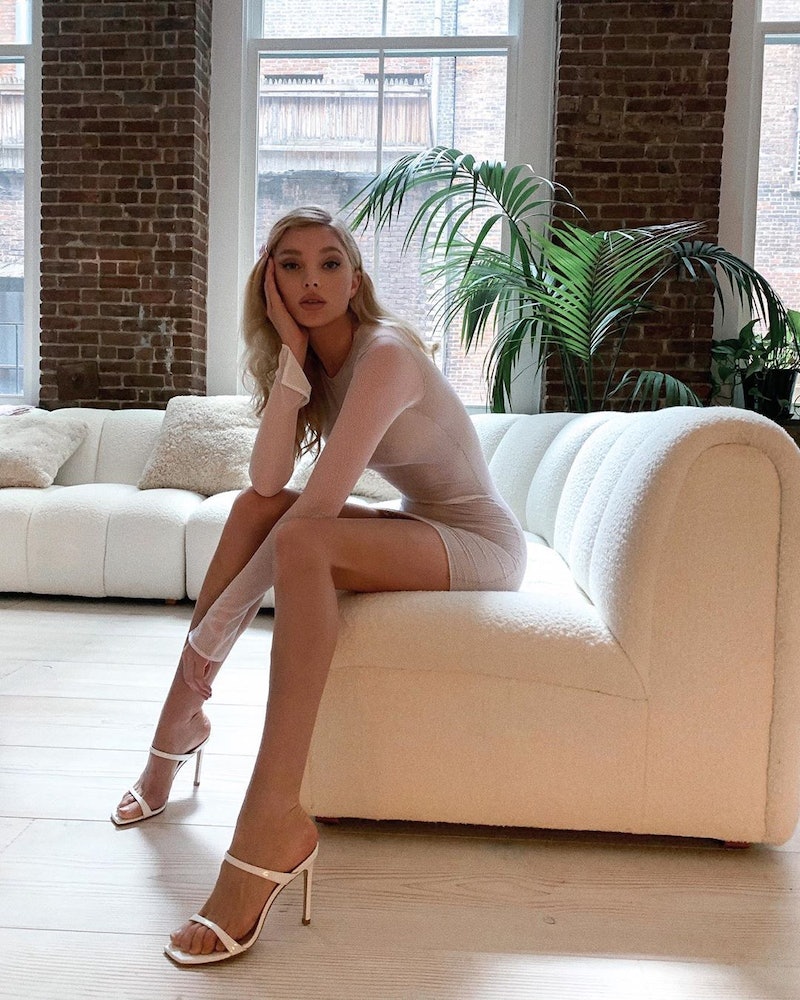 Though the Wall Street Journal may have dubbed it a very impractical trend just earlier this year, there's still no denying that the bouclé decor boom is flourishing in 2020. Because, yes, while the heavy fabric is prone to catching crumbs thanks to the looped yarn that makes up the textile, it doesn't change the fact that it's "a super simple way to add texture to a space and an easy way to make any room feel cozy," according to Kelley Mason, Manager of Content and Creative at Lulu and Georgia.

That's something many people are craving right about now, with the world in flux and the temperatures dropping, so it's not shocking that this trend has made its way into seemingly every home. And though Mason tells TZR that the fabric started seeing a resurgence as early as 2018, you won't be seeing it die down anytime soon; she says it only began gaining traction in late 2019. Now, in 2020, it's hitting its stride.

In fact, at the moment it's impossible to scroll through Instagram without seeing the trend, and that's large in part thanks to the many celebrities who have adopted it in their homes. Everyone from actor Gabrielle Union to fashion designer Christian Siriano has shown off their bouclé-covered wares to the world, proving the textile's versatility and popularity in myriad ways.

And sure, they may be celebrities, but that doesn't mean you can't use this textile in your space, too. In fact, as Mason explains, there are some tricks for easing into the trend. "The easiest way to add a touch of bouclé is [with] a pillow or throw — something relatively inexpensive that adds just a hint of texture, but can be easily moved from room to room until it finds its permanent home," she says.

Though if you're obsessed, you don't have to stop there. "Right now I'm loving bouclé covered accent chairs in modern shapes — it's a great way to update a swivel club chair, and makes a beautiful fabric for a more graphic or structural shaped chair, to soften the edges and make it feel a little more feminine overall."

With this advice in hand, continue on for some celebrity-approved ways to use the bouclé decor trend in your home, below.

Though bouclé often takes center stage in a space, Miranda Kerr's collection with One Kings Lane proves that it can flawlessly share the spotlight. Here, Kerr demonstrates just how cozy the fabric can be by pairing it with velvet in the same shade of dusty pink on this glamorous accent chair.

Maximize this textile's cozy powers with a bouclé-on-bouclé look à la Union. The actor layered her white couch with matching throw pillows, which made for an effect that's perfectly winter-ready.

Thought bouclé was too cozy to feel modern? Think again. Up against shiny wood and block-like shapes — as demonstrated in this chair Siriano designed — the textile feels surprisingly fresh.

Bouclé has a serene effect on any space, and that's compounded even further when it's used in a soft, tonal palette. Jenner proves that perfectly in her space with two bouclé-covered chairs and a matching area rug. (Bonus points if you match your outfit to the look, too.)

Though there are plenty of ways to style bouclé, it doesn't have to involve any complicated decorating tricks to look great in your home. Let Claudia Schiffer's house be a lesson in keeping things simple — just follow her lead with a sleek bouclé statement piece, and make it pop against a bright color.