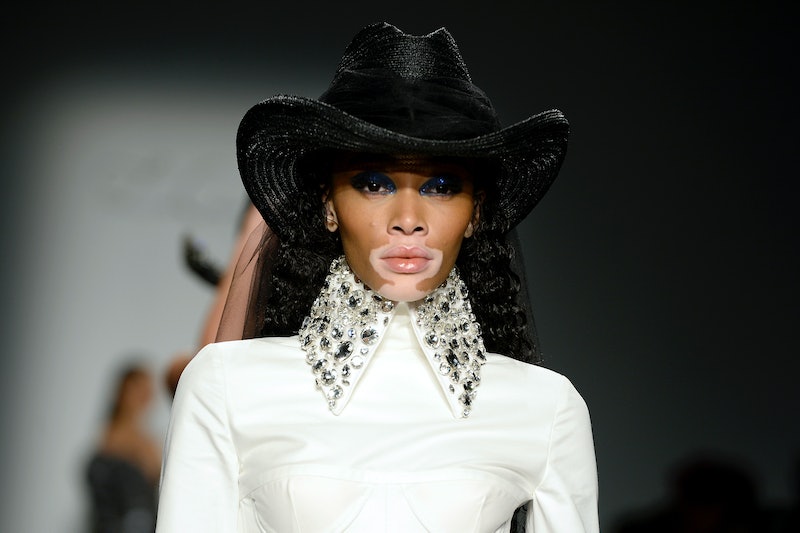 The fashion world has been feeling particularly nostalgic as of late (aka, the '80s, '90s, and 2000s have infiltrated the street-style scene without pause this season, and if you need any more proof, just take a brief trip down fashion month memory lane). Add in the fact that trends are, well, cyclical, and it should come as no surprise that sheer mesh shirts, for example — a bold wardrobe staple that '90s and early aughts babies are sure to remember fondly — are one throwback style craze taking the sartorial world by storm right now. Bella Hadid may be one notable name to rock the bygone decades' trends without fail, but Winnie Harlow just proved her nostalgia-inducing style sensibilities, too.

Harlow never fails to throw a fashion curve ball your way — and when you least except it, at that. The supermodel is no stranger to some pretty bold, unique sartorial moments (case in point: rocking chain link pants, wearing a coat as a dress, and plenty more) — and she just added another look to her style archives that offered a cool approach to the sheer trend that was all over the Spring/Summer 2020 runways. Did you really expect anything else from the always-ahead-of-the-curve Harlow, though?

On Oct. 3, the model attended the La Mer by Sorrenti launch event, hosted at Studio 525 — and her evening ensemble felt right in line with the skincare line's airy, ethereal aesthetic. For the outing, Harlow reached for pieces from Fendi's Fall/Winter 2019 collection, a range chock-full of staples that served up various degrees of sheerness.

For the base of the look, Harlow opted for a beige, tulle bodysuit that features all-over embroidered FF "Karligraphy" — a pattern that pays homage to the late founder of the FF motif. She layered a nude, organza shirt over the printed base layer and added a final, form-fitting (and practical) touch with a pocketed waist belt, also in a nude color way.

Though she could have easily kept the nude color theme going with her footwear, too, Harlow went a bold, mood-boosting route that came in the form of sunshine-yellow knee-high boots. It's worth noting that she isn't the only celeb to sport a pair lemon-y boots. EmRata recently stepped out in a similar version back in Sept., and it's quite possible plenty others will follow their lead, as well.

The two main takeaways from Harlow's recent evening look? Yellow boots are bound to replace your go-to black ones this season, and the sheer trend, in all of its various levels of, well, sheerness, is majorly thriving for fall 2019.

Ahead, The Zoe Report's favorite pieces to wear if you want test drive the sheer trend.