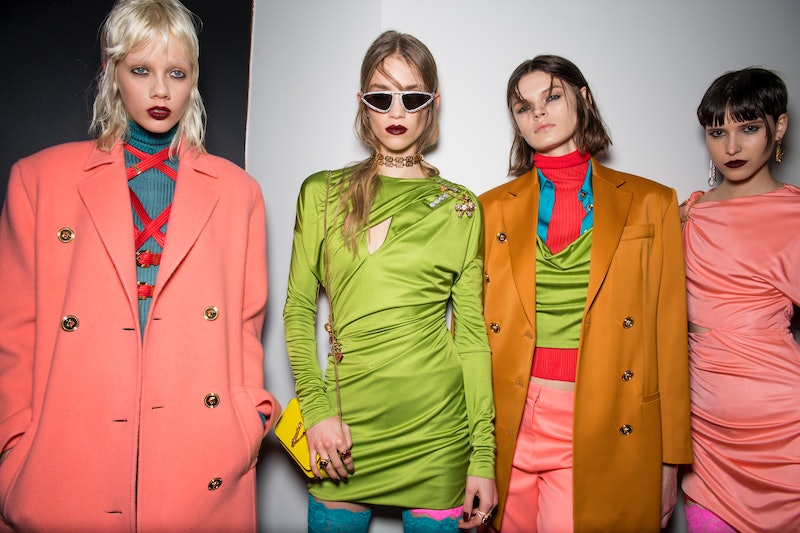 Paris may be the buzziest stop on the fashion month calendar, with its over-the-top sets (and budgets) along with its stacked lineup of luxury designers. But, Milan’s mix of quiet elegance and sequin-studded glamour (it’s Italy, after all!) make it a city that isn’t one to be overlooked. Fall is undoubtedly Milan’s season, as a city that’s known for its mastery of leathers, accessories, and outerwear, and this season was one dotted with shows that deftly embodied the modern woman — practical, but not for practicality’s sake. The best trends from Milan Fashion Week Fall/Winter 2019 highlight the fact that the modern woman needs a wardrobe that can transmute as deftly as the modern woman while still maintaining a sense of effortlessness. Women want to be comfortable, but they want to look good doing it. And that’s where Milan shines.

It's is a city of heavy hitters — Gucci, Fendi, Prada — but also long-established houses that are steering into new territories, Daniel Lee's first collection at Bottega Veneta and Paul Andrew's first as creative director at Ferragamo are prime examples of this. More than anything, these houses know the women that want to wear their clothes, and they are creating pieces that make trends easy for those with timeless style to embody. So, what is it that you can expect to see in the new arrivals section later this year? Below, you’ll find five of the fall trends that Milan’s top fashion designers are championing this year.

This season, a handbag wasn’t enough for storing all of your day-to-day necessities. Brands introduced a number of utilitarian accessories designed specifically to hold on to all of your pocket-sized goodies. At Fendi and Prada, models walked the runway in shoes strapped with zippable compartments ideal for gum, spare change or a stray lipstick. Additionally, for Karl Lagerfeld’s final Fendi collection, bags came with harnesses equipped with storage space just for AirPods — an apt choice given that the headphones have become a momentary cultural phenomenon. At Versace, AirPods were also on the mind of Donatella when she debuted arm cuffs that look cool, sure — but are also entirely practical.

Tradition be damned. While it might be expected to tone down your go-to hues as the weather starts to cool off, Milan’s top runways provided an alternative narrative in which you simply lay on (and layer on) vibrant hues all the way through the first snowfall of 2019. At Versace, unexpected oranges and the omni-present slime green were deftly styled together. Unsurprisingly, the always deft mix-master Alessandro Michele went all out once again at Gucci. But, even the more minimalist designers embraced rich tones with both Jil Sander and Max Mara sending full sunshine yellow ensembles down the runway. Bottom line: there’s no color too bold for the year ahead.

It should come as no surprise that in Milan, leather is an essential element of just about every runway, but this season, it became increasingly clear that it’s not just about slick leggings or the classic moto jacket, leather is entirely versatile. At Ferragamo, a standout piece was a floor-length leather dress that flowed effortlessly instead of appearing sticky or tight. Sharply tailored leather suiting was a staple on multiple runways, and refreshingly not just in slick black, but in rich pinks, oranges and blues too.

While a show’s soundtrack is often a secondary player during a runway show, it was impossible to ignore the muddy synths and upbeat tempos of the ‘80s biggest hits. LCD Soundsystem’s "Someone Great" served as the finale song at Ferragamo, and unsurprisingly, the Attico’s presentation (set in a Lamborghini-filled garage) featured retro club beat after club beat. But, it wasn’t just the music, the looks themselves referenced a certain optimistic reinterpretation of the decade. Glitzy minidresses, sharp shoulders, and most surprisingly — gloves, all offered nods back to the John Hughes era.

A carryover trend from the runways of NYC, classic suiting continues to be reinterpreted for fall. Brands that have masterfully delivered crisp tailoring season after season are now taking these timeless pieces apart, adding in unexpected materials, or even the threads used to designate seams (a cool touch at Gucci). Though the simple silhouettes remain, there's nothing old school about these looks.