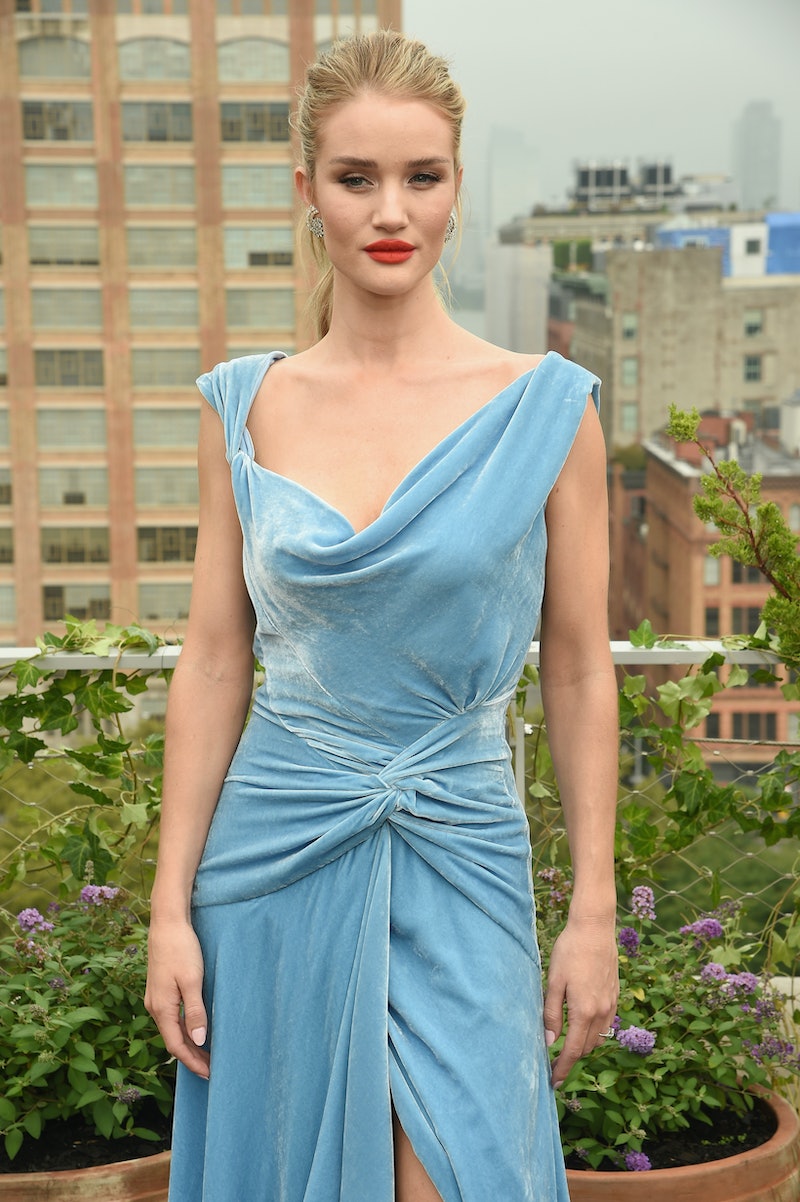 Another day, another Rosie Huntington-Whiteley Instagram post to double tap right away. The English beauty, who's the queen of the #OOTD, is gearing up for next season (or, at least it looks like she is) by slowly but surely swapping out her warm-weather essentials for more cold season-appropriate ones. First up on the list? Huntington-Whiteley is officially replacing her slip skirt with a denim midi that you're going to want to add to your lineup, stat.

Sept. will be here in the blink of an eye — and that means fall's official arrival will follow soon after the new month rolls around. So, the time to start prepping your wardrobe for the chillier season is officially now. And with the help of some of the most stylish celebs in the business, the oftentimes tricky transition isn't actually all that difficult to master.

In fashion terms, autumn is usually referred to as either "sweater weather" or "boot season," and now, Huntington-Whiteley's latest 'gram is adding a new style-centric phrase to said list: denim-skirt season. Who's on board?

Considering the fact that the '90s slip skirt reigned supreme all summer long, the model's denim midi is a natural, fall-friendly progression. It's slightly heavier in material, but just as versatile as its silky cousin, which is exactly why it's destined to be the next it-item for fall 2019.

Huntington-Whiteley styled the denim midi with her all-time favorite Zara bodysuit. Really, she's quite obsessed with it — she owns it in two colors, a nude and a classic white, and has worn it a handful of times in the last few weeks.

A pair of mesh pumps and a large clutch, both by Bottega Veneta, and her go-to Celine sunglasses rounded out the summer-to-fall getup perfectly.

When the temperatures drop another 20 degrees, all you need to do is throw a cozy cardigan over the aforementioned base pieces and maybe slip into a pair of knee-high leather boots. Talk about a simple transition, right?

Of course, a denim midi skirt is just as versatile as your trusty jeans, which means you can wear it with everything in your wardrobe, whether that's an oversized sweater, a denim jacket, a white button-down, a plaid blazer, the list goes on — and on.

Ahead, The Zoe Report rounded up the best jean midi skirts on the market, including the exact one Huntington-Whiteley owns. Shop them all, ahead.

Comfy and cool doesn't even begin to describe this stretch-denim pencil skirt. Wear it to work with heels or with sneakers for a busy day of checking things off your to-do list.

This one's rendered in a slightly darker wash than Huntington-Whiteley's, but it's just as versatile and easy to wear.

There's so much to love about this skirt, from the A-line finish and raw hem to the elevated by pleat detailing.

This Topshop midi skirt is so trendy and wallet-friendly. For a mere $68, you can sport fall's next big It-item.

This denim midi skirt would look so good with a classic white tee and red leather boots.