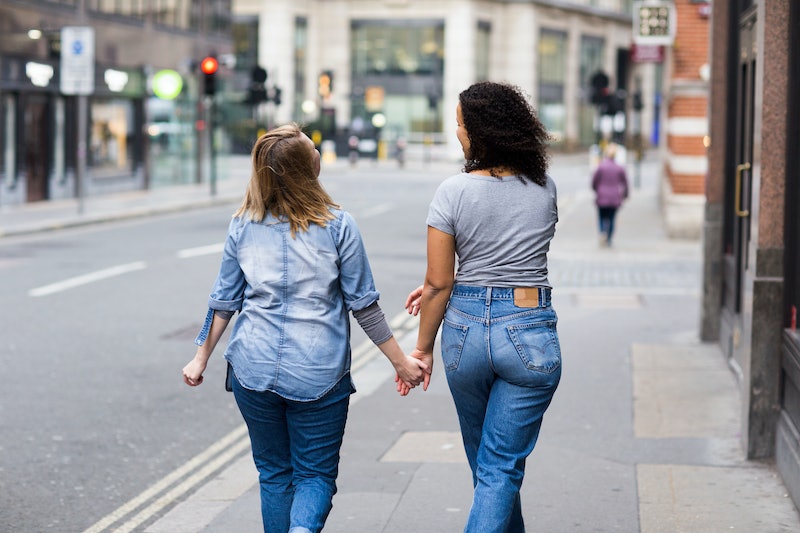 Anyone who's pursued a long-distance romance knows it presents its own unique set of challenges — but that doesn't mean those can't sometimes turn out to be some of your best and healthiest relationships. As is the case with any couple, it all just depends on how you stay connected with your partner. But for some, there comes a time when you have to decide if the two of you need to actually try sharing a zip code to continue moving forward. And while relocating for love might just be the biggest leap you've ever taken, studies show it might actually pay off.

According to a new survey, three out of four people who moved for a romantic relationship are either still with their partner, or stayed with them for a year or longer. Additionally, two in three people who did so claim they don't regret their decision — which includes the 51 percent of duos who ended up dating only 6 months or less. And if you ask experts like Rachel Thomasian, Marriage and Family Therapist at Playa Vista Counseling, there's good reason for that. "When you're in a long-distance relationship, you don't get as much of the 'real life' experience with this person that you might if you lived closer," she explains.

And while she admits that having benefits like more exciting moments and less chance for boredom can keep long-distance situations from running into difficulties common for those who do live close to one another, it also might mean preventing you from seeing how you'd handle obstacles down the line. Therefore, relocating may not work for everyone, but it could give you and your partner the intel you need to see if you can make it in the long haul.

And while the study's finding seems to spell good news for those who are nervous to take the next step with their long-distance mate, there are still a lot of serious factors to take into consideration, like how to know when or who's going to be the one to relocate. Thirty-two percent of those surveyed reported that the hardest part of relocating for a romantic partner is the initial decision to move. And while every couple has their own unique journey, the six-month mark might be a good time to assess the reality of whether or not the future will include living in the same city, according to Thomasian. She adds that couples are most ready when they've already agreed upon commitment, and are a good fit for each other's lives — which includes getting along with others closest to you. "I usually say that if your friends and family are fans of the person, it's probably a good sign," she says.

Another major challenge of relocating for love is adjusting to life in a new area. In fact, 31 percent of those surveyed claimed this to be the hardest part, while 30 percent the most difficult aspect was leaving leaving their old life behind. That begs the question, what do you do when you really love where you live?

If you feel totally a home where you are — in contrast to your partner being open to a change or at very least not as connected to where they live — let that help you decide who makes the move. "I think if one person has a strong support system in the town they live in and their partner would like to try that town, they should go for it," Thomasian says.

Additionally, while the therapist claims that in the cases where both parties have a desire to start fresh and can't decide on who should be the one to move, it might be to your benefit to first try the city one of the two of you currently calls home. "It's so much harder for two people to settle into a new place and make connections than it is for one person to move to a place where their partner already has a feel for the town," she says.

And if you're not quite ready to relocate, don't fret. There are still a few ways to keep the connection strong when you're dating long-distance, according to Thomasian — who notes that honesty is key. "It's okay to be content with being long distance as long as you're both on the same page," she says. "Communicate regularly throughout the day, but don't feel the pressure to talk all day in order to overcompensate for the distance. Schedule your time together. Even if it's a ways out, knowing you'll see each other again and having something in the books makes the distance more bearable than it being up in the air."