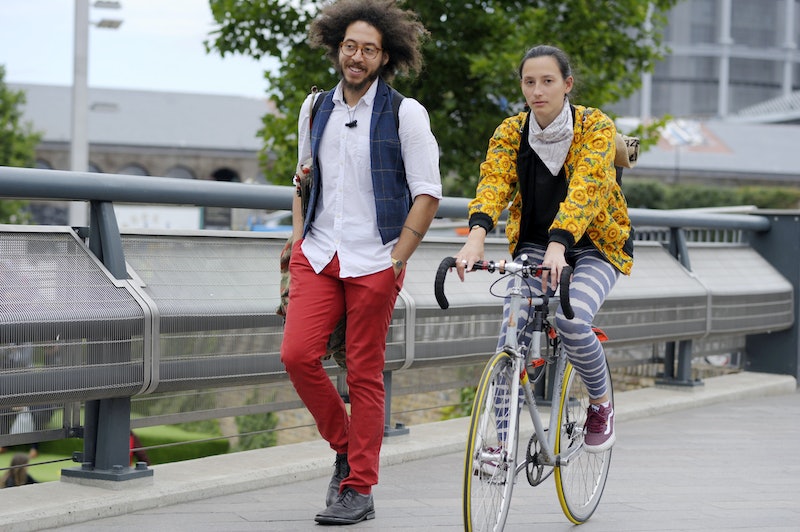 Working on a relationship is hard enough when your significant other is in close proximity to you, but doing it from different states or even countries is a whole other ballgame. While distance can certainly make the heart grow fonder, it can also build frustration, resentment, trust issues, and, sometimes, a breakup. So, how does one navigate a long-distance relationship? Is there a perfect formula that guarantees a happily ever after (whatever that may be)?

Of course the answer to the latter is no. “Understand that a long-distance relationship is different than an in-town relationship,” says relationship expert April Masini. “If you expect them to be the same, you’re in for a rude awakening.” In fact, if making remote romances work was easy, maybe there wouldn’t be a sort of stigma or dark cloud attached to them. For many, distance can be a deal-breaker.

That’s not to say long-distance love can’t be done. It can and it has — in spades. According to a study by Statistic Brain Research Institute, some 14 million people in the United States claim to be in a long-distance union. The thing to remember here is that every couple is different, because everyone’s love languages and needs are different. So what you need to make a long-distance relationship work is somewhat subjective and more of a case-by-case scenario.

That said, relationship experts (and couples who’ve actually successfully navigated them) say a few key factors should be present no matter what kind of remote situation you’re in. Ahead, see what they had to say about making star-crossed love last.

Have An End Game

Relationship expert Rachel DeAlto says making sure you and your remote partner are on the same page about the future of your relationship is crucial to making it work. “The main first factor is that there has to be an end game,” she says. “There has to be a goal at the end. Make sure you ask each other questions like, ‘So, what happens when this works?,’ ‘Where will be living in the future?,’ and ‘Is one of us willing to move at some point?’”

Influencer and actress Kendall Keith seconds this notion and found it to be very true in her own long-distance situation with her boyfriend. The two went through two stints of living in separate countries when her work took her abroad. “It worked for us because our long distance was temporary,” Keith says. “I think if it becomes too long of a timeframe [...] or if your end games are no longer similar then it’s time to move on. If you get too comfortable living apart, it may be time to have a talk.”

This is an obvious one, but it's so vital it's worth a mention. "Trust is key, not with just fidelity, but with relying on each other to put equal work into the relationship," says Keith, who is now living with her significant other of eight years in Los Angeles. Said trust factor requires both you and your partner to be, that's right, truthful — about everything. "Being real and truthful with my partner helped me to figure out how we can work towards strengthening our relationship," says Keith.

Be honest about your fears and doubts within your union and how you feel most secure in your situation. Sometimes the key to getting what you want from your partner is simply asking.

You Can’t Sweat The Small Stuff

While bickering and knit-picking isn't great for any relationship, within a long-distance one, it's downright toxic. Things like missed calls and text messages are going to happen, so be prepared to pick your battles. "Long-distance relationships are very different than in-town relationships and you’re not always going to be able to reach your partner, know where they are, or be there for them in person," says Masini. "This means you’re going to have to allow your partner more slack than if you were in town to be together, easily."

Communicate Constantly — About Everything

The Zoe Report's own shopping news editor, Anna Buckman, is a long-distance veteran. Her and her now husband navigated their love remotely for years while they were in college in separate states. Buckman says talking regularly — and not leaving anything out — was a key component to staying connected with her significant other.

"We learned pretty quickly that you have to talk every day, and you have to talk about everything, even if it's hard," she explains. "I don't like confrontation, and I'd often keep things that upset me to myself, and I'd find myself furious at him for days, sometimes weeks, until he'd finally realize it and convince me to talk to him about it. We both learned the importance of having open discussions, even if it was hard."

See Each Other Regularly

Again, this may seem like a no-brainer, but keeping regular meet-up dates on your calendars is a non-negotiable. "If you’re in a long-distance relationship with no date on the horizon, and no structure to your get-togethers, there is going to be a lot of anxiety for at least one of you — if not both of you," says Masini. "Whether it’s a once-a-month get together, or every other week, long distance relationships require some in-person structure in order to work."

Buckman seconds this notion, adding that it also gives you "something to look forward to, which often helped us avoid feeling hopeless because you don't know when you're going to see each other next."

Be Willing To Pay For Love

Sweeten Things Up Whenever Possible

Because you aren't able to show physical attention to each other, proving your partner is always on the brain is key to making them feel secure in the relationship. "Something that also helped us was doing small, romantic things for each other," says Buckman. "My husband (then boyfriend) used to record himself playing my favorite songs on the guitar and send them to me in the middle of the night so I'd wake up to the recording, and we'd often surprise each other with little gifts. It was hard not being able to do small things for each other in person, but those helped make up for the distance, and I think it often reminded us why we we fell in love in the first place."