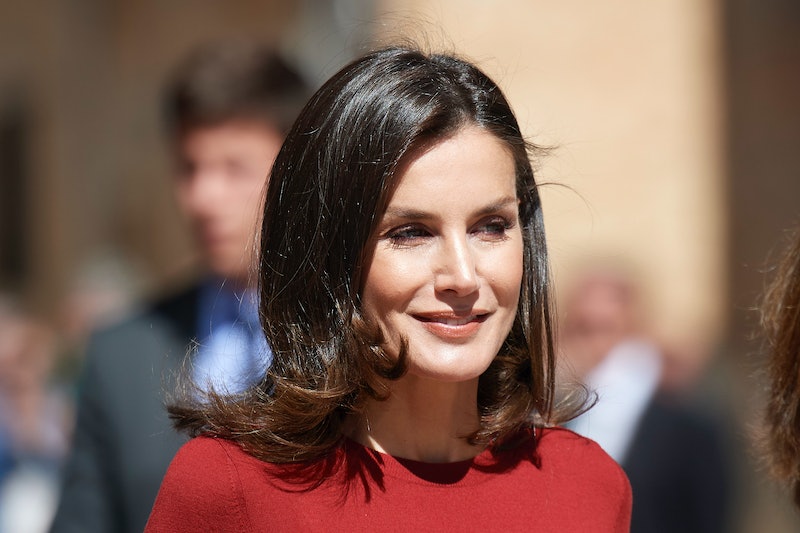 Royals love red — plain and simple. Meghan Markle, Kate Middleton, and Queen Letizia of Spain have all been spotted donning cherry-hued frocks on repeat. And though there's been a slight lull in color among the style icons as of late, with the three opting for more subdued shades like navy blue and pastel yellow for recent outings, Letizia's red top and trouser combo — which debuted on Weds. — proves a royal can never stray from red for too long.

Spain's queen always manages to make a statement, even when she isn't wearing a bold, striking hue. On Tues., Letizia opted for a dark-blue midi-length frock that was sprinkled with white flowers, presumably causing a major spike in sales of botanical-print pieces. But for her most recent outing, it seems the royal was craving some serious color — and she's going to inspire you to follow suit ASAP.

For the appearance, Letizia stunned in a monochrome outfit, consisting of a crewneck sweater and cropped, high-waisted trousers, both of which were rendered in a rich, ruby-red hue and hailed from Hugo Boss — a brand she's turned on repeat over the years. She grounded the outfit with a pair of crimson-colored patent leather pumps.

Letizia forewent accessories, opting only for a pair of diamond-encrusted ear crawlers that ever-so-slightly peaked out from underneath her shiny brunette locks. She's never one to go overboard with her makeup either, and for the Weds. outing, she stuck with her tried-and-true approach: a neutral smoky eye and a nude pout.

The queen of Spain has quickly become the unofficial queen of monochrome red ensembles — just take a look at some of her past ensembles if you need any more convincing.

Want to copy Letizia's latest look? Though both her sweater and pants are currently sold out, the market is chock-full of plenty of pieces that makes monochrome dressing a breeze. Shop The Zoe Report's favorites, below.

If you want to go bold with color, pair this tunic with the matching pants. But if you're not quite ready to do head-to-toe red, team it with light-wash jeans instead.

These aren't your average red pants. The navy piping and ivory grosgrain trims along the sides adds eye-catching detail that makes them chic yet sporty, too.

Take the guesswork out of monochrome dressing by reaching for a one-and-done jumpsuit. Add in red shoes, and you're good to go.

You probably didn't know you needed a towel fabric top — until now. Scoop up this one from Mango for a reasonable $45 and wear it with the matching skirt.

This towel fabric skirt transitions from the beach to the streets in seconds. Style it with the coordinating top for an all-red look sure to garner you endless compliments.