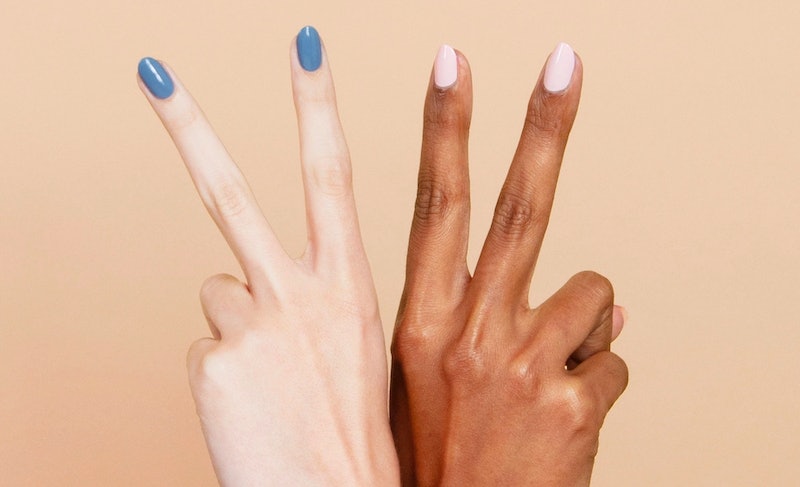 Finally, oh finally, the first day of fall is just over the horizon and nearly in sight. That's good news for those who've spent the past several weeks meticulously preparing wardrobes and beauty routines for the shift in seasons — it's just about time to actually break out those fresh ensembles, swap in of-the-moment makeup, and slick a trending coat of color onto nails. And when it comes to the latter, Paintbox's new Fall/Winter nail polish duo is here to present an incredibly unexpected (but oh-so dreamy) alternative to all the moody hues you've been spotting all over.

New York City's crowd-favorite nail studio and polish line Paintbox likes to think outside the box. It's known for inventive, modern nail art designs that take otherwise simple nail looks up several notches with just a couple swipes, and introducing colors you'd never think to pair together or wear during a particular season. Paintbox's newest addition to its popular Power Couples polish duos, naturally, is no exception and presents two pretty pastel-leaning hues you've probably never thought to pick during fall. It's safe to say they're about to change your mind (and your manicure) this season.

Paintbox's new Power Couple in Like Rain + Like Blush, $40, may not look like it on first glance, but it's inspired by fall. The 10-free, cruelty-free, gluten-free, vegan polish formula has just been dropped in a slate blue and powdery pink shade, which are meant to mimic the sky during the autumnal season. Edgy gray-blue Like Rain brings to mind the moody atmosphere during a fall thunderstorm, while romantic chalky pink Like Blush is reminiscent of pink sky as the sun rises in the morning after the rain. Both give you fully pigmented coverage in two coats, for high-impact color that'll help you stand out this season against more classic fall polish picks.

As with all of Paintbox's Power Couples, Like Rain + Like Blush are meant to be worn together (although they're equally as enjoyable on their own). Create ultra-minimalist nail art looks that play up the modern, unexpected fall color combination, like angular, crisp lines with some negative space that reflect the open air of the skies. Or, try coating nails entirely with darker, moodier Like Rain and make the hue more lively with double dots of the creamy pink Like Blush on each nail.

Clearly, Paintbox believes that pastel shades are no longer reserved just for spring — and based on how chic these colors are, it's no surprise if you're inclined to agree. Snag the new Fall/Winter polish duo, below.

These colors may not be what you'd immediately think of when you imagine fall — but consider the dreamy colors of an autumnal sunset, with a slate blue sky and fluffy, powdery pink clouds. Now do you see it? Wear these colors alone or together with minimalist nail art for an unexpectedly perfect fall manicure.