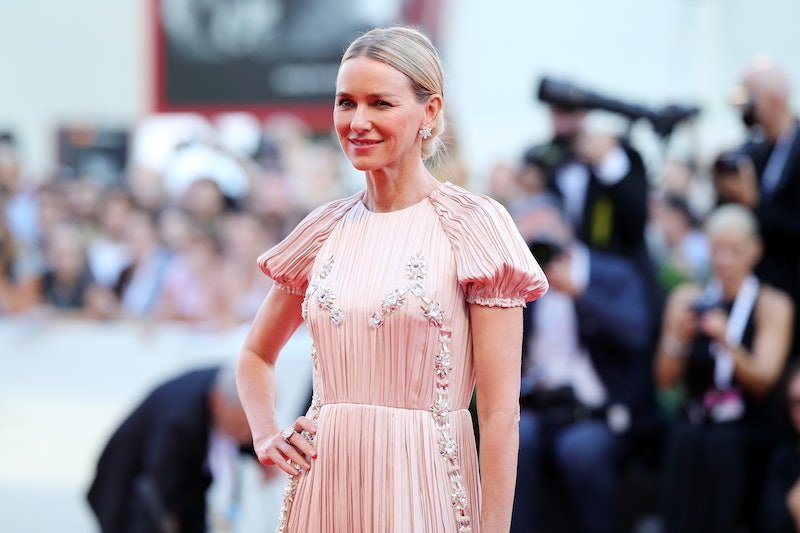 The Tribeca Film Festival is fully underway— and in the few shorts days since its April 24 kickoff, the annual event has already offered up enough fashion and beauty inspiration to last you all year long. Margot Robbie's sheer lace suit was quite memorable, as was Jennifer Lawrence's incredibly chic approach to menswear. But the true standout moment came on Sun., with the debut of Naomi Watts' blunt bob haircut. Now may be the time to grab your phone, because the actor's fresh chop will definitely inspire you to book an appointment with your go-to stylist ASAP.

The red carpet has seen its fair share of drastic (and subtle) beauty transformations. At the 2019 Oscars, for example, Charlize Theron showed up with one of her boldest dye jobs to date, while Emilia Clarke opted for a more slightly understated hair change for the awards show. Watts' new bob lands somewhere in the middle. In recent months, she's rocked a wavy bob that hit just above her shoulders, but for Sun.'s red carpet, her pin straight hair appeared to be about three inches shorter than usual.

Watts' hairstylist, Renato Campora, took to Instagram to reveal the actor's fresh bob, posting a series of photos that showed it off from various angles — one from the front and another from the side. Super-blunt ends and a chin-grazing length defined the 50-year-old's glamorous new chop, which was styled in a middle part and straightened to perfection for the Sun. screening of her latest movie, Luce.

It's only natural to want something different for the new season — and Watts isn't the only celebrity to crave a change right now. Just last week, hair chameleon Emma Roberts debuted a boho blonde shade, courtesy of hair guru Nikki Lee. And on April 13, Eva Mendes took to Instagram to display fun strawberry highlights that channeled summer in the best way.

Blunt bobs have also proven to be a frontrunner in 2019, with the likes of Demi Lovato and Julianne Hough opting for the shorter style in lieu of their signature long locks — and with good reason. It's not only easy to style, but lightweight and airy, too, so you won't have to deal with your hair sticking to your neck when that summertime heat (and humidity) strikes.

Ready for a major change? Call up your most trusted stylist and ask for a super-blunt bob à la Watts. Then, scoop up The Zoe Report's top styling products to use to recreate the actor's pin straight, über-smooth hair to a T.