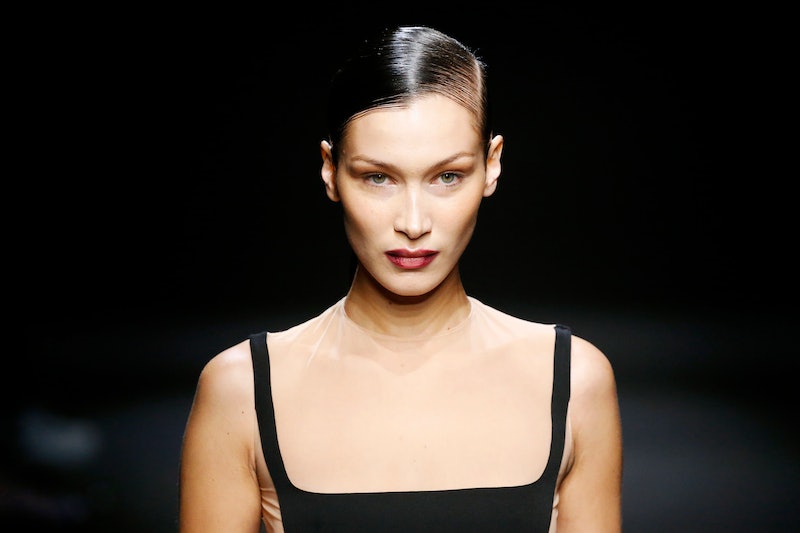 The Mugler girl is one who isn't confined to fashion's rigid standards. Let's not forget last season, where a refreshingly diverse cast of models — of all genders and sizes — wore spiky stilettos and mesh inset dresses. But the Mugler girl is also kind of a b*tch, according to hairstylist Jawara, key artist for Mugler Fall/Winter 2020... a b*tch with really good hair.

'We're doing a continuation of the girl from last season," he tells me at the Feb. 26 show held at Palais de Tokyo. "The real mean girl, in a sense, like what she would look like if the hair evolved." As a refresher: The Fall 2019 presentation last September reflected "a really cool girl or guy who owns the room, owns their space," he told me at the time. "They command a space in the room. You kinda want to be them, but you kind of hate them at the same time. But you are them, sometimes, in certain atmospheres."

A true bad b*tch is one who isn't particularly fussy, so Jawara and his team actually intended on making the girls' hair look as greasy as possible, "like she hadn't washed it in a few days," he says. "Then, we're taking hair gel, applying it in the front, and parting on the sides." Some of the models with shorter hair boasted a part that echoed the shape of their ear to make it abstract. "I wanted to have something that's cool and badass, but wanted to make it artistic in a sense." Other models, like Bella Hadid and Snoh Aalegra, wore long, back-grazing ponytails with blunt ends. And with Jawara, you know there will be a wig moment — six lacefront ones, to be exact, all with different colors and textures.

With all of the varied looks, there was one product that held the girls down (literally): Got2b Ultra Glued Invincible Styling Gel, a $7 beauty supply staple that you likely already have in your arsenal. It was the hero product for the parted, slicked look, and the adhesive to keep the models' wigs in place (he used his Dyson Supersonic to set the gel on the hairline) — proof that even the coolest girls can't resist a good discount.