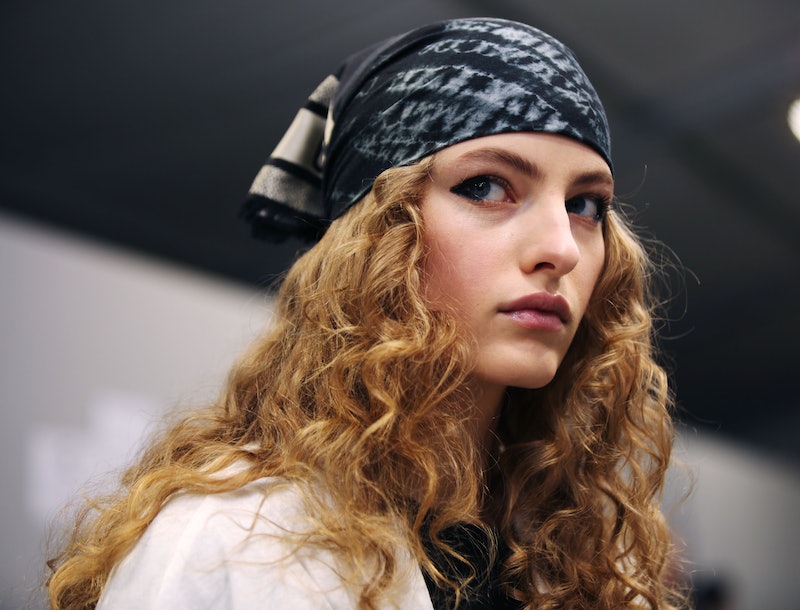 "It's Maria's world, not a beauty counter," Peter Philips jokingly tells a small group of reporters backstage at Dior Fall/Winter 2020. And walking into the Feb. 25 presentation, held at Paris' Jardin des Tuileries, attendees got a taste of what Ms. Grazia Chiuri's world looks like — and it's firmly rooted in feminist beliefs. (If you haven't already seen it on social: the entire venue was emblazoned with flashing neon signs proclaiming "Consent" and "Patriarchy Kills," and my favorite: "Women are the moon that moves the tides."

So of course, the beauty look was one that spoke to that same spirit of freedom and individuality. Peter Philips, Creative and Image Director of Dior Makeup, and Guido Palau, Global Creative Director for Redken, teamed up to create seventies-inspired glam, as curated Grazia Chiuri, the brand's fearless Creative Director.

"The first thing she said was [that she wanted the look to be] a bit abstract," Philips notes. She specifically referred to seventies intellectuals — and from there, the team figured out their take. "I got that she wanted a more natural approach, and little bit of black around the eyes," he continues. "She said she loves my eyeliner, and wanted a variation of my lines."

Individuality was also important, and she wanted to try out something different for every model at the fitting (there were 84 looks in total). "She likes to control. I’ll do a few looks and pick, and then just stick to that so there’s no surprises in lineup," Philips says of their creative process. "It's more for her peace of mind."

That's why the makeup look — matte skin, brushed brows, natural lip color, no blush or highlight (Chiuri thinks it's a bit "too made up"), and three different black eyeliner designs — was super attainable. "We kind of want to keep street cool, like you've done it yourself," Philips says.

He used Dior Backstage Face & Body Foundation as a base, and his favorite product of the moment — Dior Forever Skin Correct Concealer — for under-eye circles, blemishes... and even as foundation, on some of the models. "It's a gem," he says, praising the formula's elasticity.

As for the liner, he relied on Diorshow On Stage Liner in Matte Black along with Diorshow Khôl for that sooty, inky finish. Some of the girls had fully-lined eyes around the entire perimeter, some boasted an elongated under-eye, while others received a simple outer-corner flick. When the line becomes sharper or pointy, it becomes a bit more couture and elegant, he says, hence the round, free shapes.

And for the hair, Palau drew inspiration from iconic figures like Bridgette Bardot, who wore scarves leisurely on holiday — but also sprinkled a little bit of Axl Rose in, too. "They're wearing it with natural textured hair, which gives coolenss and ease. When you wear an accessory, you don't really have to play up the hair too much," Palau notes. "The style is coming from scarf." A little bit of Redken Extreme Play Safe was applied for texture, and Frizz Dismiss Rebel Tame Heat Protective Leave-In Cream helped eliminate any flyaways. But if you want to try this at home, then his best advice is to create your own rules (are you sensing the theme, here?). "The ease of hair is what's important," Palau notes. "Fold it your way."