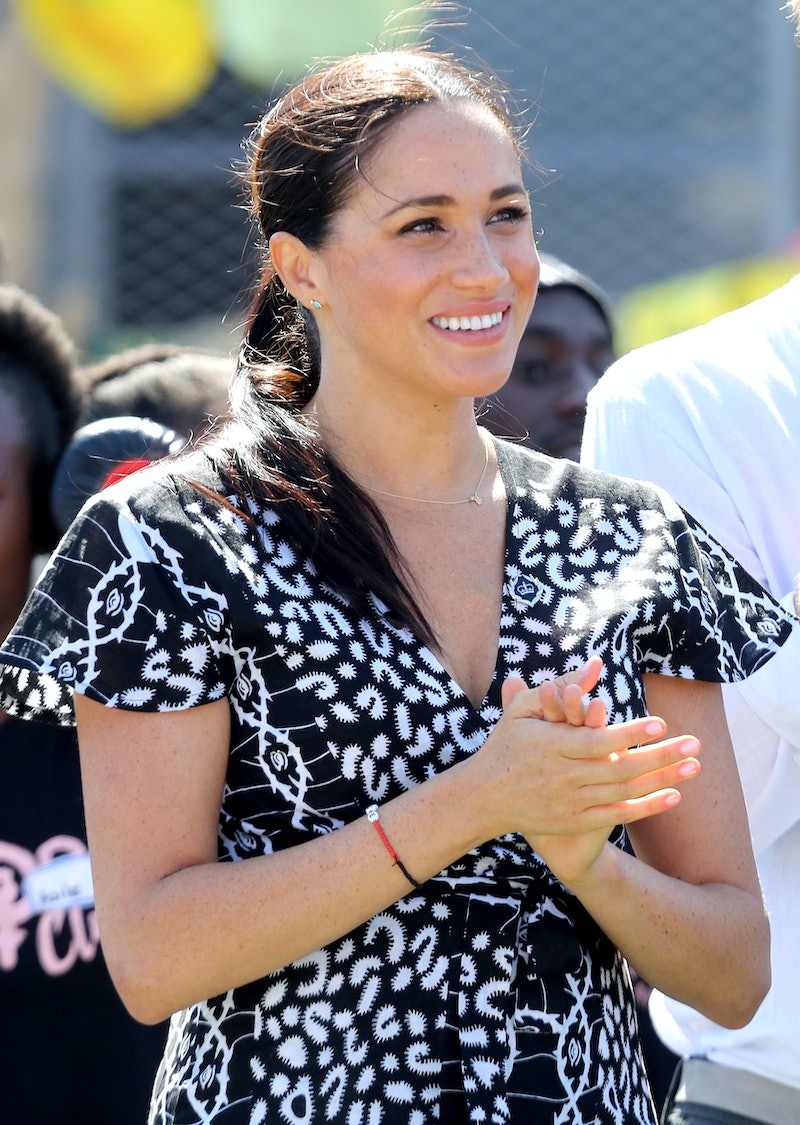 If you think a royal — who, undoubtedly, has an endless array of new, fresh essentials at their disposal — is above an outfit repeat, think again. Kate Middleton is a master at effortlessly recycling stylish staples (like a gorgeous blue Jenny Packham lace dress she wore in 2012 and then again in 2018). Queen Letizia of Spain is totally on board with re-wearing her closet favorites, too. And finally, rounding out the triple threat royals who love a good #outfitreapeat is Meghan Markle. That blue shirt dress she sported for a recent outing in Cape Town? She's worn it in the past, though she did style is quite differently this time around.

The Duke and Duchess of Sussex's royal tour of South Africa kicked off on Sept. 23 and will focus on "community, grassroots leadership, women’s and girls’ rights, mental health, HIV/AIDS and the environment," according to their official Instagram account. This also marks the couple's first major trip since Oct. 2018 — and it's already proven to be one of the books. Archie is in tow, and only time will tell when he'll be making an official appearance. And, it's worth noting that this makes him one of the youngest royals to go on an official tour. Way to go, Archie!

For the style set, however, there's one facet of the royal's South Africa tour that's been on their mind nonstop: Markle's outfits. And in the few short days since the trip officially kicked off, the ever-stylish duchess has already succeeded at churning out several headline-making ensembles. But really, did you expect anything else from her?

On Sept. 23, Markle and Prince Harry visited the District 6 Museum in Cape Town, where they were slated to tour exhibitions at the museum to learn more about the district's history and culture.

For the outing, Prince Harry donned a mint-green suit and a crisp white button-down, while Markle opted for a slightly poppier look in the form of a blue shirt dress that she actually already wore once in Oct. 2018.

This time around, though, the duchess took a slightly different styling route with the long-sleeve Veronica Beard frock. She paired the mid-length number with black Castañer espadrilles — which just so happen to be Middleton and Letizia's favorite summer shoe of choice, too — and styled her hair in loose, bouncy waves.

Markle was first spotted wearing the blue frock in Oct. 2018, while she and Prince Harry were on their royal tour of Tonga. That time, though, she took a more polished approach, teaming it with baby-blue heels and a slicked-back ponytail.

As Markle proves so effortlessly, a classic shirt dress, whether rendered in a poppy blue or a classic black, is bound to become a staple in your wardrobe. Why? Because you can always fall back on it and easily change up the look and feel of it with a few simple styling switch-ups.

The duchess' dress is no longer in stock (shocker, right?), but the market is chock-full of stunningly similar pieces. Ahead, shop The Zoe Report's favorite shirt dresses to carry into the cold-weather season.