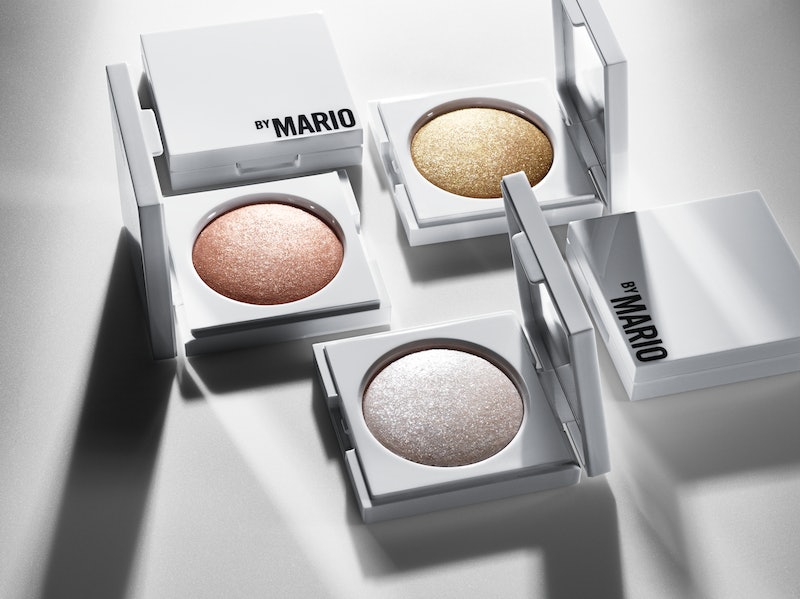 If you know anything about makeup, you certainly know the impressive portfolio of Mario Dedivanovic. The 20-year industry vet, who works with notable celebrities like Ariana Grande, Gabrielle Union, and a little someone known as Kim Kardashian, has been in love with artistry since he first swatched shadows as an employee at the Flatiron Sephora location in Manhattan two decades ago. Now, after years of establishing a long list of credentials and loyal Instagram following of 7.9 million, he's finally branching out and launching his own eponymous line: MAKEUP BY MARIO.

"It was a long-time dream of mine," Dedivanovic tells me over a Zoom call on Sept. 21. "I felt ready. I didn't feel ready the first 16 or 17 years of my career." But with two decades of experience under his belt, he finally feels it's time to take the leap. "I think I have good ideas and pure intentions in creating a brand around education, as well," he says. Launching a makeup line was what Dedivanovic wanted his next step and chapter to be — especially since this year marks his 20th in the industry — so he dedicated his time, energy, and love into making it possible. While he physically started building out the line in March 2017, before that, Dedivanovic was meeting with some of his founder friends to try to help guide and lead him in the right direction.

While Dedivanovic has collaborated on collections like the KKW x Mario Artist & Muse Collection and The Makeup By Mario x Sephora Collab, this is his very first solo line. MAKEUP BY MARIO is launching on its website and at Sephora with 21 product SKUs, retailing from $14 to $48. The collection debut has a strong focus on the eyes with its assortment of eyeshadow palettes, liquid liners, pencils, highlighters, and brushes.

"They are all my babies," he says about his products. But if he had to choose two hero products, they would be the Master Mattes and Master Metallics palettes. The Master Mattes palette was the first product he developed for his collection. The 12 universal shades in the palette were inspired by human skin tones. If you love more of a glitzy eye look, the Master Metallics is for you. Influenced by colors found within the body and Dedivanovic's passion for human nature, the metallics can create a slew of looks, from natural to intense.

Many of his products stem from the professional techniques he's developed along the years, which can be learned in his Masterclass. "The metals are inspired by my technique of mixing the loose pigments with the mixing mediums," he reveals. The pencils were created around his method of blending liners, which can be achieved with the brush on the end. "The Master Eye Prep & Set is based on my technique of using the cream pigments, then the translucent powder to buff out areas and prep the eyes," he notes. "So everything is based on a very personal technique."

Dedivanovic's passion for beauty started when he was just a teenager. "When I was 17, I started [working] at Sephora. That's when I decided that this is was what I wanted to do." During his days working at the big box beauty store, he admired the makeup artist major brands like NARS, Vincent Longo, and Stila. "I just naturally had a connection to those brands in particular," he says.

In these early years, his big break moments included assisting makeup artists Kabuki and Billy B Brasfield. But it was when he first started working with Kim Kardashian in 2008 that his following grew drastically. Dedivanovic recalls a makeup tutorial on Youtube he did with Kardashian back in 2009. "It was so many years ago, when YouTube wasn't popular," he recalls. "Now I look at that and it was a really pivotal moment because so many people were exposed to me at that time because of that video." In turn, he says a lot of artists looked at him as a mentor because they never saw a makeup artist working on YouTube.

Fast forward to today, and you'll find his skills are so high in demand that he teaches them through his Masterclass in cities across the globe, from London to New York City. "I started doing the Masterclass because I love teaching — I have my whole life." The first Masterclass he did was with a small group in Los Angeles. "I was really eager to teach and share when I started, and people didn't really share stuff like that [at the time]. You had to really work with them one on one."

As far as packaging, Dedivanovic wasn't too hung up on bright colors and loud design. "I did want the brand to be a certain aesthetic in the sense of like a look it's sort of known for," Dedivanovic says. "I just wanted to start out with these core formulas, separate them by texture, and begin with my philosophy and my techniques."

The line isn't available until Oct. 1, but get a sneak peak below. Products will be available on Sephora.com and makeupbymario.com, as well as Sephora stores.