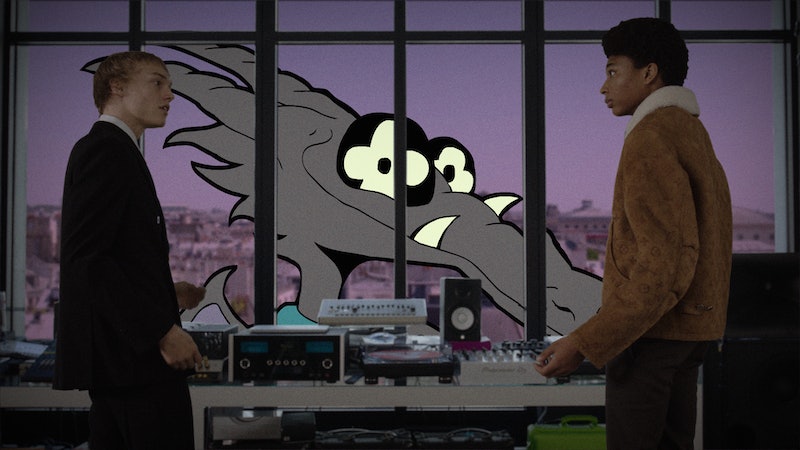 So much of what the world knows about menswear in 2020, it knows from Louis Vuitton. Since Virgil Abloh assumed one-half of the Artistic Director seat, alongside Nicolas Ghesquière (womenswear), his designs have helped give rise to "menswear, for women," a movement similarly felt at Kim Jones' Dior and Donatella's Versace in recent seasons. So, when Abloh set a "barge" of shipping containers down the Seine filled with genderless, imaginary characters wearing his new collection, the whole world — men and women— couldn't help but look. For Louis Vuitton's Men's Spring/Summer 2021 collection, Abloh's designs are "floating" eastward — descending on Tokyo and Shanghai with two IRL experiences next month.

To participate in the digital rendition of Men's Fashion Week, Louis Vuitton released a video, entitled "The adventures of Zoooom with friends" on Jul. 10, which called upon a trove of kitschy, unconventional cartoons. The film illustrates their misadventures as they prepare for their journey at sea. Starting at the Maison's ancestral home in Asnières, a shaggy dog, a violet dinosaur, and countless other obscure characters make their way to the barge — all bedecked in the caricatured version of LV's upcoming collection. Black-and-white checkered pantsuits, faded jeans, cool, vintage-inspired tees, and flared trousers were all illustrated, taking abstracted forms as the narrative shifted. By nightfall, the troupe found themselves in a pseudo-psychedelic trip, their ensembles then rendered in supersaturated, '90s-era color profiles. In each look, its original format and its technicolor revision are easy to imagine blending with women's closets. Experimentation with color was a key characteristic of womenswear before it was welcomed into mens, a construct that Abloh's Louis Vuitton loves breaking the mold on. As the key vessel, the shipping container is, then, the confluence of Abloh's fixation on the "industrial" and LV's famous trunk, which was born out of the Asnières atelier in 1858.

Against the backdrop dignified fashion scene in Paris, all of the kitsch — the bubble-blowing, the intergalactic "zooom"-ing, the kaleidoscopic color — responds to the current climate in a way that's central to Abloh's LV. In the wake of a pandemic and an unprecedented racial movement, Abloh conjures the ability to dream through youthful eyes — or, as he's famous for saying, through the eyes of his 17-year-old self. “You have to bring back fun because the last time we were together, it was sad and deadly,” Michael Burke, Chairman and Chief Executive Officer of Louis Vuitton, told WWD. In March, the house closed out Fall/Winter 2020 Paris Fashion Week with Ghesquière's designs, just days short of global lockdowns.

While Abloh was considered by many to be the leader of a new vanguard in fashion and inclusivity, the Artistic Director has recently come under controversy for his response to the Black Lives Matter protests in the U.S.. Fans criticized Abloh for expressing outrage after one of his businesses in Chicago was vandalized, a sentiment that was echoed when his $50 donation to a Miami bail project came to light. Today, on the same day of the collection's arrival, Abloh announced on Instagram that he had raised $1 million for "POST-MODERN," a new scholarship fund in his name for black students pursuing a career in the fashion industry.

Though the masses may have to wait until Aug. 6, when the barge "arrives" in Shanghai, to see the full collection — there's tons of past instances of menswear, for women from the house to daydream about. Take, for example, Gigi Hadid's cloud-print pantsuit outfit from the brand's Men's Fall/Winter 2020 arsenal. As part of LV's shifted focus on sustainability, the new collection calls on previous styles and materials — 25 looks featuring all-recycled materials, and 25 looks with silhouettes directly plucked from past collections. So, now is as good a time as any to getting acquainted with LV's menswear arsenal.