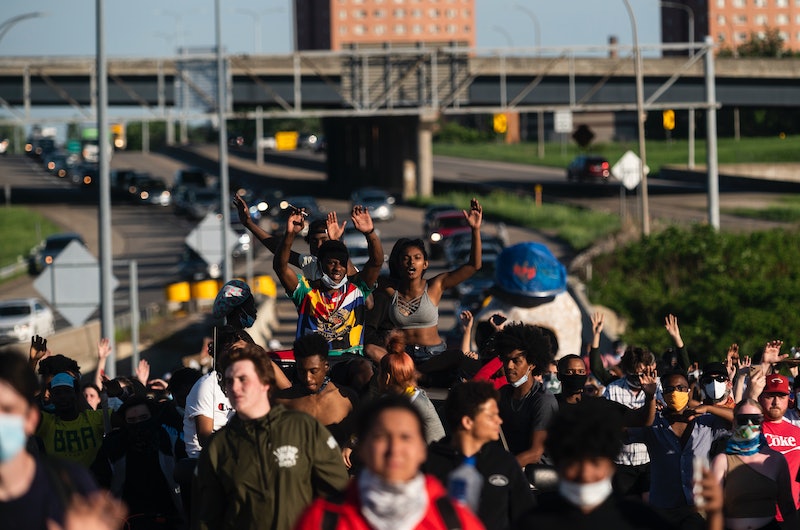 This month is not an ordinary month. And, yet, it is. On May 5, a tape confirmed what had for months been true, setting the internet ablaze: An ex-police officer and his son shot and killed Ahmaud Arbery, an unarmed 25-year-old black man who was out on an afternoon jog. Then, on May 25, George Floyd, a peace activist beloved by the Minneapolis community, was killed by four members of local law enforcement. The incident was also taped and released, and mounting tensions exploded. While reality has shifted considerably in 2020, police brutality is not a new normal. What's different is that, in these two instances, it was recorded. Long an ally to marginalized groups, the fashion world is responding to the tragic losses in the black community with agony and fury, with scores of designers speaking out and demanding justice for the needless deaths of Arbery, Floyd, and many others before them.

"I don’t have the words," shared Naomi Campbell, the runway vet who shattered ceilings as a black female during the '90s supermodel era. "I’m sick and tired of this, tired of being sad about our people dying needlessly... where does it end? I’m black and I’m proud #JUSTICEFORFLOYD. MAY HE REST IN POWER," she shared through a string of posts related to the killings. "How can people be so heartless? What can I do to help?" wrote Marc Jacobs in a post on his Instagram. "The second question is the one that needs an answer. #GeorgeFloyd". Pierpaolo Piccoli, Creative Director of Valentino, had a similar message from overseas in Italy: "What happened in the US in unacceptable, this has to stop, the disregard to humanity has to stop. now and forever" he said in an Instagram post on Thursday. "No form of racism, violence, aggression and brutality should never ever be tolerated. It’s the time now to raise our voices against that."

As the justice system continues to fumble on cases like Arbery's and Floyd's, conversation is a crucial powder keg for enacting change. But, to move the needle forward, it's key that words are followed by action. Virgil Abloh, who famously helms both Louis Vuitton and Off-White, encouraged followers to call Minneapolis District Attorney Mike Freeman. "Demand justice for GEORGE FLOYD and his family," his Instagram post read. Following the tidal-wave of phone calls, officer Derek Chauvin, who enacted the violence that claimed Floyd's life, was arrested on May 29.

Others are making donations and encouraging their customers to do so as well, whether by giving the profits of their products to organizations or providing the resources to their customers to donate directly. Peter Do announced in an Instagram post that the brand would be committing 100 percent of its e-commerce sales for the month of June to Black-founded organizations and charities who fight for racial justice and Black equality. GANNI donated $100,000 across Black Lives Matter, the NAACP, and the ACLU, while also calling on its followers on Instagram to do the same. "If you are thinking about making a purchase with GANNI this week, we ask you to consider donating to an anti-racism organization instead."

Even if justice is brought, staggering changes will still need to take place to ensure this never happens again. Diet Prada, a leading online fashion critic and advocacy account, spoke deftly to the importance of self-education: "The time for feigning ignorance has passed. For those who are not black (us included), it’s imperative to educate ourselves. The resources and tools have been there. It’s no one’s job to teach us." Prabal Gurung shared a similar message, voicing the need to accept discomfort and take responsibility, not just when it's convenient. "Now is the time for action. It is our moment to have difficult conversations, to challenge ourselves, to ask hard questions, to resist, TO GET LOUD, to act outside our comfort zone, and to reach across the aisle," he wrote in a caption. "We can no longer exercise our activism or use our voice when it is comfortable for us."

To learn more about racism and police brutality, Tolerance.org offers a wide range of educational reads, categorized by resources for teaching tolerance, professional development tools, and more. Kerby Jean-Raymond, the designer behind Pyer Moss, also points his followers to Mappingpoliceviolence.org through his latest Instagram post. The site is an extensive database that offers a true scale of the violence unfolding, as there's currently no way to access this through government law enforcement agencies.

You can keep up with the evolving cases and the ways you can help on Floyd and Arbery's sites, justiceforbigfloyd.com and runwithmaud.com. For those who are in a position to give, there are several foundations currently in place to protect and advocate for the black community. The NAACP Legal Defense and Educational Fund is a New York-based civil rights organization and law firm that has been fighting for racial justice since 1940. To aid the Minnesota community in the wake of George Floyd's passing, visit the Minnesota Freedom Fund to learn about more ways to get involved locally.

This article was originally published on 5.29.2020