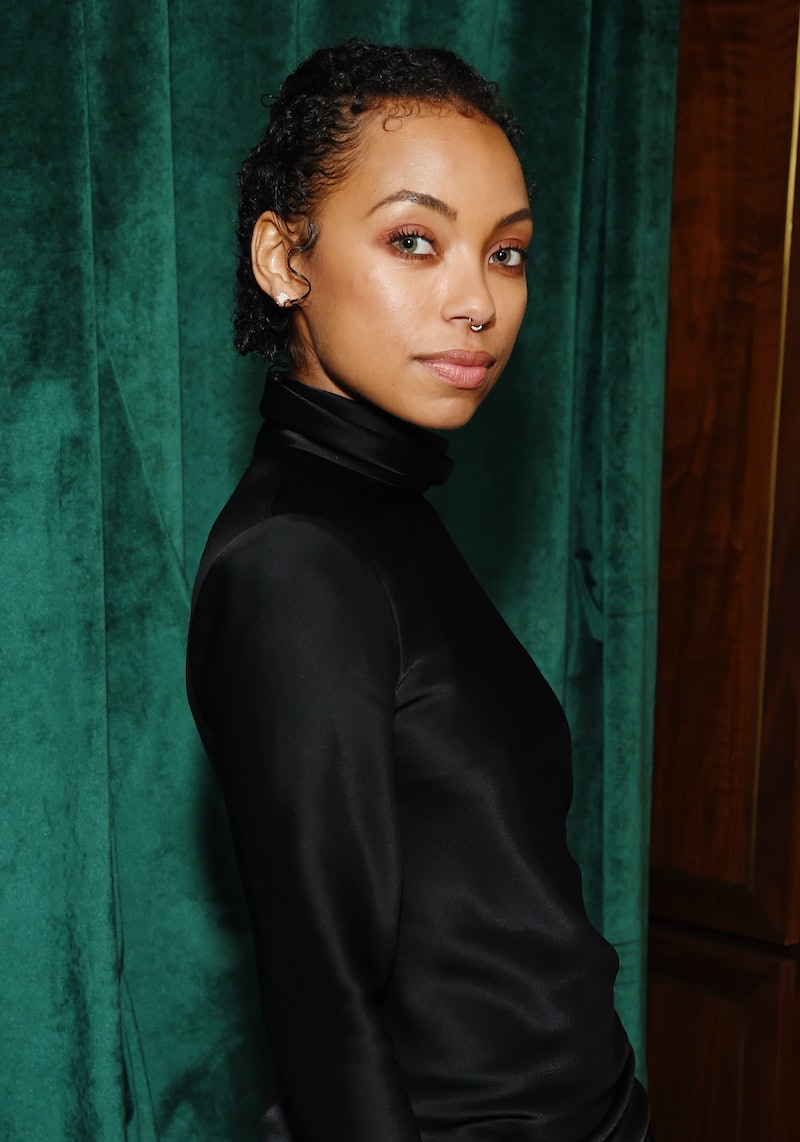 The 26th Screen Actors Guild Awards may have passed, but the party kept on going as the stars ventured to the many after-parties offered throughout the evening. Sure, the Shrine Auditorium saw plenty of beautiful, daring, and downright chic looks on the silver carpet, but it was the post-event happenings that allowed celebrities to bring a different type of sartorial prowess. Case in point: Logan Browning's SAG Awards after-party dress, which was the most perfect upgrade to the classic LBD.

The SAG ambassador, who first stepped onto the red carpet in an ethereal mauve Jason Wu dress, Ruthie Davis shoes, and Pomaletto jewelry opted for an equally chic asymmetrical black dress. Although it sounds simple and classic initially, Browning proves, the beauty is in the detailing. To start, the silky frock featured a turtleneck, sleek long sleeves and ruching at the waistline that gathered at the side. The latter aspect made for an interesting waterfall effect, as the bottom of the dress was a ruffled asymmetrical mini with a floor-length side piece.

Browning's LBD wasn't the only one spotted on the after-party circuit. Maya Hawke, traded her epic black Giambattista Valli Couture pantsuit (another hot trend of the event) for a noir babydoll mini that felt fresh and breezy as she mingled. To keep her stems cozy, the actor paired the frock with sheer black tights that made the ensemble read very vintage. Also letting her hair down was Millie Bobby Brown who swapped out her stunning floor-grazing Louis Vuitton blazer dress (which she also wore over tailored ankle trousers) for a fun strapless corset top. Brown's outfit allowed for more movement as she danced the night away with the Stranger Things cast.

Although many of the nights attendees chose to stick to their red carpet ensembles, the three aforementioned young stars are living proof that the real fun (and fashion) starts and ends at the afterparty. To get some inspiration that'll keep you fueled for the rest of the week, take a page from these ladies and their perfect post-event ensembles.