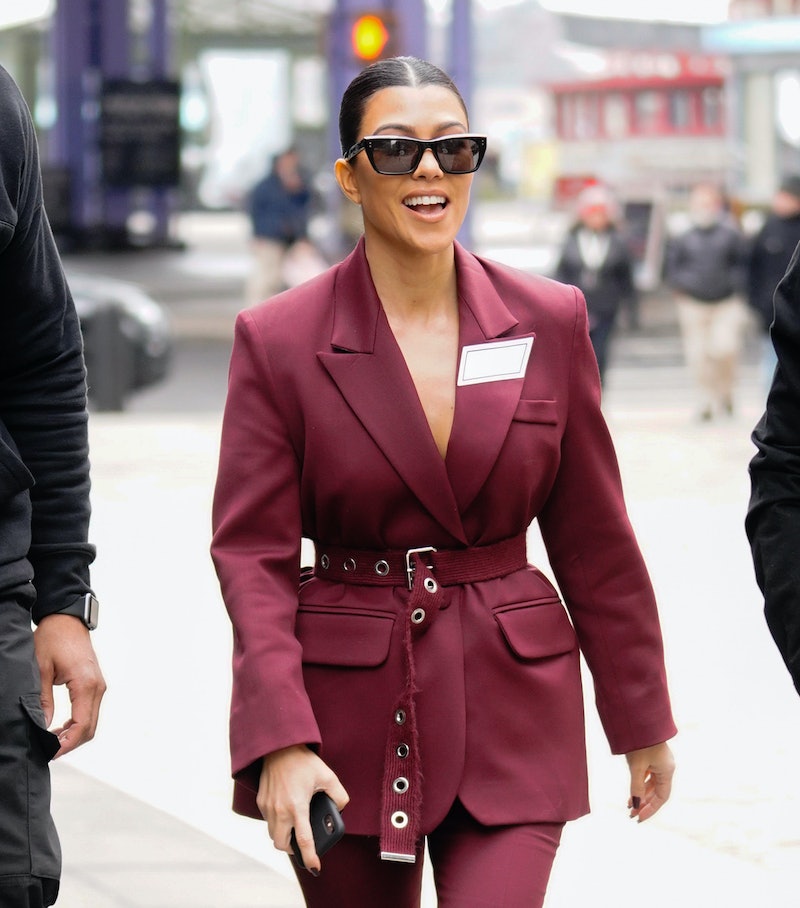 Though a Los Angeles native, Kourtney Kardashian has New York style down to a science. Whether wearing a slick power suit or an impactful trench coat, the 41-year old model-mogul is known to come to the East Coast with scores of immaculate ensembles in tow. For her current trip, all her outfits are incorporating one key detail, and it might already be sitting in your closet. Kourtney Kardashian's combat boots are the pièce de résistance across a whole host of moody outfits she wore this week — and they're shockingly simple to style.

For her week in Manhattan, it's entirely possible that Kardashian had a few other shoe styles planned — but, be it a side effect of the wet weather or a choice made for sheer chicness, she reached for her lug sole boots twice over the course of the outing. The best part? Both looks rely on the same outfit formula, which entails no more than three easy steps. Most recently, on Oct. 12, the mother-of-three stepped out in an ankle-length trench coat, in a sandy shade that invoked the '80s. With black contrast trim, the trench synced up with her matching top, leggings, and Hermès Kelly Mini bag, pulling off every New Yorker's no fail all-black look.

Days before that, on Oct. 10, Kardashian went with a mood-boosting blazer dress: Eppram's Niagra style in linen, which sold out near-instantly after her appearance. While the latter may seem far more polished than her casual trench coat outfit, both ensembles feature many of the same players — a tiny top handle bag, cat-eye sunnies, and a waist-wrapping jacket. The core difference? Her blazer dress' truncated hemline is more situated for day-to-night wear, which Kardashian proved when she stuck with the outfit late into the evening.

Kardashian's Prada boots retail for $1,470 — but for those who may be searching for something slightly more cost-effective, try Irina Shayk's favorite Doc Martens ($180) or Mackage's newly-launching warrior boots ($590). You can, in fact, grab Kardashian's same bag and frames, with two "like" styles that mimic both of her jackets. Browse ahead, and be sure to read up on the ways other celebrities are wearing combat boots right now as well.