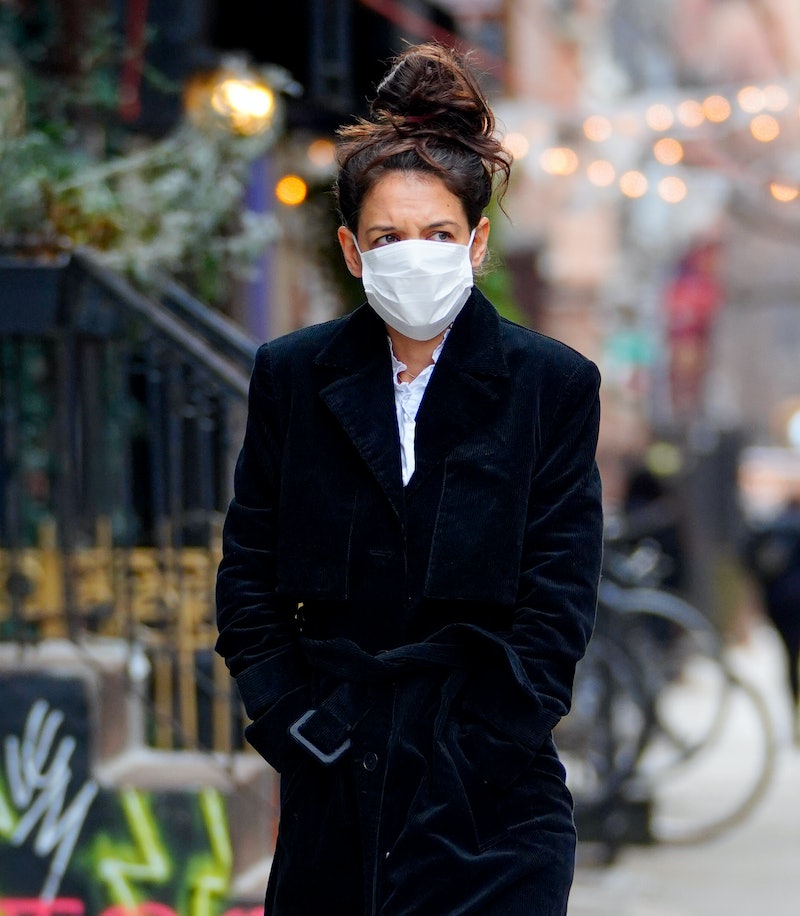 Across social media this week, a nostalgic image from the aughts circulated: Britney Spears and Justin Timberlake in matching denim outfits at the 2001 American Music Awards. It was exactly 20 years ago that the polarizing fashion moment happened and this week, a street style star you all know resurrected Timberlake's Canadian tuxedo. On Jan. 12, Katie Holmes wore a denim-on-denim outfit while out with her boyfriend, Emilio Vitolo Jr., in New York City. The ensemble felt fresh and modern, one you might even consider getting for your own wardrobe.

On top, Holmes wore a double-breasted denim blazer with angular patches that resembled this emerging up-cycled trend. She layered a button-down shirt and another top underneath that to keep warm. To coordinate with the jacket, Holmes slipped on matching blue stovepipe jeans. For accessories, she went with Khaite's leather crossbody bag and a pair of cool white sneakers. Rather than break out her usual Common Projects, Holmes reached for another throwback style: Re/Done's basketball shoes, which were designed to invoke the spirit of the '80s.

Holmes' Canadian tuxedo undeniably takes the cake for conjuring up nostalgic trends while giving it that 2021 fashion twist. She didn't wear a denim dress like Spears did, but Holmes called on similar details: out-of-context pants pockets and tonal patches.

To recreate this denim-on-denim look, you'll need a similar blazer with clearly defined patches — Kseniaschnaider makes a close version, and it's half-off on Farfetch — and, of course, jeans. (A bonus: the designer is celebrity-approved by the Hadid sisters.) For the final touches, grab Holmes' exact sneakers and bag, below, both of which stand the chance of being sold out that she's co-signed them.