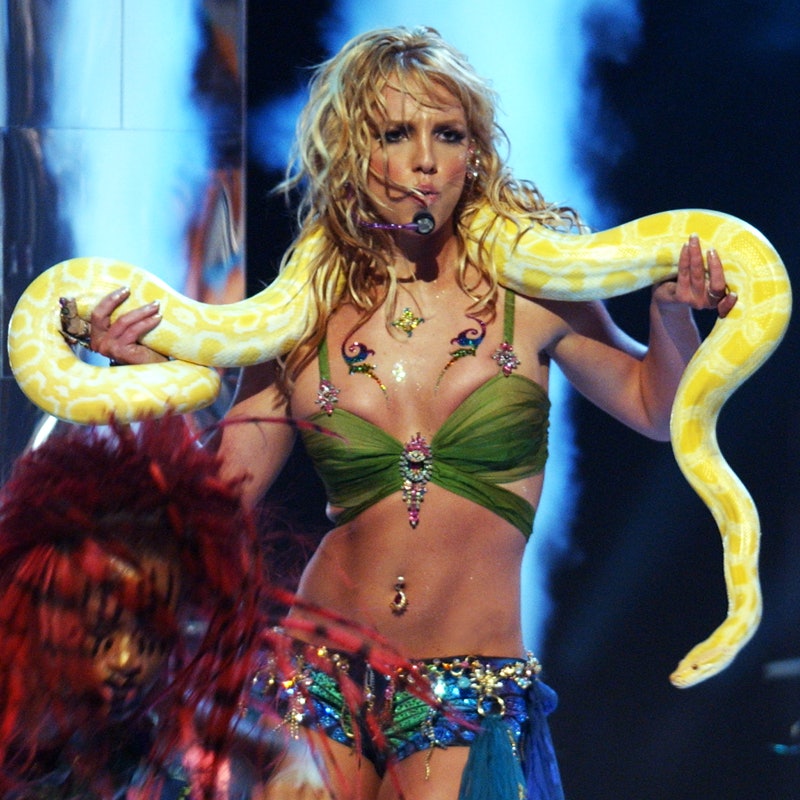 If you’re of a certain age, you will always have a soft spot in your heart for Britney Spears. You may not know exactly why you love her more than you love 90% of the members of your family, but you do. Here, 11 times she cemented her place in history, and in our souls, in anticipation of her big comeback performance at this year’s VMAs.

Her 2001 VMA "Slave For You" Performance

We're a little weirded out knowing that Britney was just 17 when this cover was shot, but the potential ick factor doesn't make the image any less iconic. Revisit the full cover story here.

Wow, we just re-watched this, and it's racier (and weirder) than we remember. Between her mile-high club moment and the bedazzled nude bodysuit, we're starting to get why our parents were not as into Britney as we were.

Again, in retrospect, it's a little creepy to sexualize Catholic schoolgirl outfits on girls young enough to be in Catholic school, but we just thought Britney was the best thing since sliced bread (avocado toast hadn't yet been invented) when the "...Baby, One More Time" video came out. This was Britney's big explosion onto the scene, and it all—the song, the video—felt like one big sexual innuendo, even if "hit me" was supposed to be code for "call me." Mm-hmmm.

Her Red Leather Look In The "Oops!... I Did It Again" Video

Also, the white eyeliner, which some of us are embarrassed to say we wore all throughout high school.

Remember this? She ripped off her business suit to reveal an outfit in which only 0.000001% of the population could pull off dancing? #NeverForget

This 2004 Super Bowl ad is epic. It also starred Enrique Iglesias, because obviously.

2007 was a tough year for Britney, as she faced fallout from the intense fame and scrutiny she had experienced from such a young age. Many people seized the opportunity to try to knock Britney off her early-aughts pedestal, but to no avail. She came back better than ever in 2008 with "Womanizer," and those of us who had been with her since the very beginning all but wept with relief.

We kind of felt like this 2013 single was an answer to Britney haters everywhere. You want a Maserati? A hot body? Get to work, b----!

Her "Piece Of Me" Vegas Show

Everyone we know who has seen this show has returned with raves. Though many stars end up playing Vegas residencies in the twilight of their careers, we feel like Brit used the experience to get her mojo back, and as we'll see on August 28 at this year's VMAs, it worked!

E! has confirmed that the Lifetime network is developing a movie around Britney's storied life, and though we've yet to see even a single shot, we're sure this film will only further our obsession with the iconic pop star. The two-hour biopic will follow the arc of her career thus far—the fame she attained at a young age, her epic fall from grace, and her recent return to the spotlight. Britney's relationships will also take center stage, including her time spent with Justin Timberlake, her short-lived marriage to some guy whose name we've forgotten already, and her second marriage to a guy whose name we wish we could forget (K-Fed). No release date has as of yet been given.