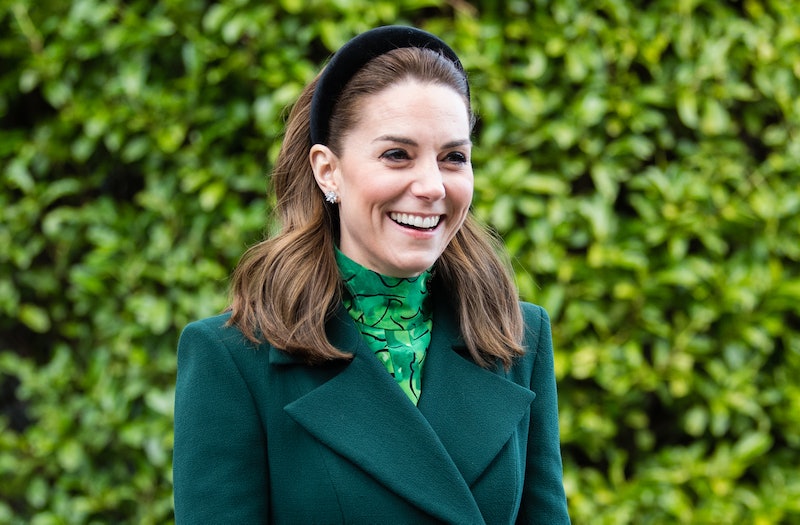 During her first visit to the Republic of Ireland with husband, William, in hand (and looking darling in green outfits along the way), Kate Middleton took the chance to debut a new hairstyle. And though it's not as dramatic as Kim Kardashian's recent thigh-grazing ponytail, Kate Middleton's curtain bangs are certainly It-girl approved. As if you needed any more reason to make the look your next.

Although curtain bangs — aka bangs, usually on the longer side, that part in the middle — have been gracing cool-girls' foreheads since the '70s, the style has had a recent surge in popularity thanks to stars like Selena Gomez, Courteney Cox, and longtime wearer, Suki Waterhouse, who all donned the look in 2019. And it seems Middleton was taking note of the haircut's upward curve as much as everyone else.

For her take on curtain bangs, Middleton opted for a soft version of the style with face-framing pieces hitting around the top of the cheekbone and falling away in longer layers until meeting the rest of her hair. And with scissors already in hand, Middleton's stylist chopped a decent amount of length off her chest-grazing strands as well, bringing it up to something a tad longer than a lob.

Sporting bangs isn't new for the duchess; in fact, she's had a love-hate relationship with them in the past — at one point reportedly regretting getting them altogether. But, things have obviously been smoothed over between the two, because she's looking great with her newest iteration of the wispy style.

The duchess has more than solidified a new title of trendy mom — nay, woman — this trip. Before debuting her new bangs, Middleton wore a black padded headband by Lele Sadoughi on March 3 akin to the bands seen walking down Prada's Fall/Winter 2020 runway. But as good as Middleton looks sans fringe with a headband pushing her hair back, the curtain bangs just work so well.

Keep the now-royal style in mind for the next time you decide to switch things up because there's something to be said about a hairstyle that makes *the* Duchess of Cambridge don it — and that's that you should follow suit.