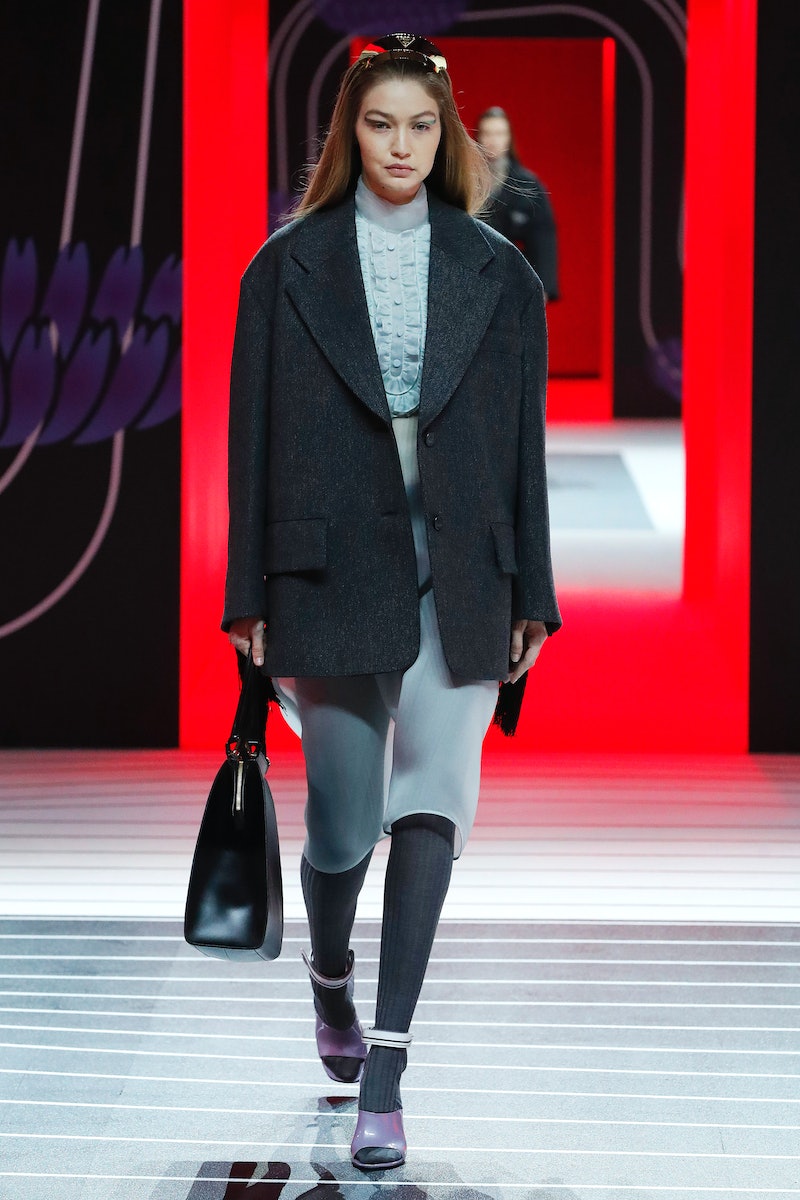 Miuccia Prada has an uncanny knack for transporting her audience to a different decade. Last season, for Spring 2020, it was the ‘70s, what with the oversized spectacles, brown-and-orange motifs, and pussy-bow blouses. Back in Spring 2017, it was the early ‘80s, evident in more ways than one. And for Prada’s Fall/Winter 2020 runway show, the designer set her eyes on a new time: the present.

Of course, there were hints of decades past: the tailored skirt sets; the layered sweater vests; the glistening midi-dresses; the fringe that was, well, everywhere. But this collection felt specifically modern. It leaned on a few trends that haven’t yet run their course — tiny purses hung around the neck, belt bags centered at the waist, a new iteration of the Prada headband that hit instant cult status — but was grounded in the timeless quirk that comprises the Italian label.

“Tools of glamour, uniforms of beauty,” opened a press release, translated from her native tongue. “For Fall/Winter 2020, a consideration of the strength of women, an emphasis on an inherent authority found in that which is intrinsically feminine. Rather than a negation of identity, a celebration. The agency of women.” That’s a notion we need now more than ever.

The designer cherry-picked elements from her most recent menswear show, including the set (a play on an Italian piazza); the eerie soundtrack (par for the course) and even some styling elements (a sleeveless shirt flanked by a tie and a sweater vest). Models materialized from one of 18 luminescent red doors, the majority clad in pieces that look best while in motion: car wash skirts, glittering fringe, sheer dresses layered atop opaque tights. “Movement is tied to the corporeal, to athleticism … the clothing of everyday, today,” the release continued.

“Along the walls, boldly geometric flowers appear between the graphics, echoing the façades of Viennese Secessionist buildings,” the release said. The geometric flower motif showed up on nearly half a dozen pieces, including a trio matching silk pajama sets.

Her more-is-more approach was evident in full-length faux-fur coats (the label officially eschewed real fur for its Spring 2020 collection); risky color combinations of red and green, or black and yellow; and fringe on everything imaginable: on the hem of a tiered midi dress, at the collar of an embellished frock, as a full skirt. In one instance, it hung from a scarf tied around the neck to give the illusion of knee-length hair.

As per usual, outerwear was a hit: There were two separate iterations of shearling-lined patent leather longline vests, as well as the genius soon-to-be it-piece: a half-blazer, half-puffer topper in a variety of colors. Expect to see it on notable Prada devotees next season.