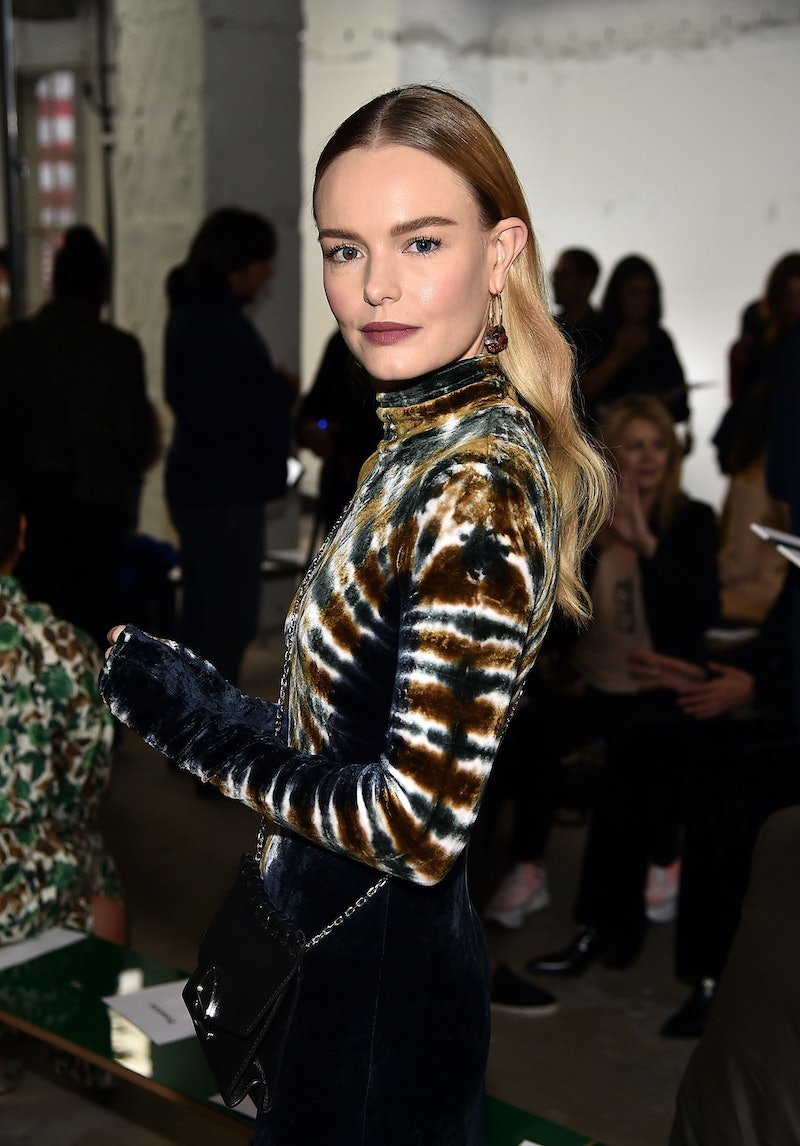 'Tis officially the season of mini dresses and sandals, but as Kate Bosworth's latest summer dress outfit proves, there's another shoe you should definitely consider pairing with the ultra-short frock. Sneakers, the ultimate comfort-cool kicks that have quickly become a fashion-girl staple, are perhaps the most unexpected grounding piece to wear with a dress, but they just work. Prepare to toss your heels and sandals aside this season, because Bosworth's optic white trainers are all you'll want to wear with your mini.

Everything about Bosworth's most recent street-style look screamed 2019 — and that's because it hit on just about every major trend-to-know. The actor was photographed out and about in New York City, just a few hours prior to hosting the launch party for Missoma’s new summer collection, wearing a plaid, long-sleeve mini dress. The frock may have had a sleek silhouette, but the über-voluminous puff shoulders added some serious drama. Sleeves keep getting bigger, bolder, and more statement-making this year — and clearly it's a trend Bosworth is wholeheartedly on board with.

The 36-year-old tastemaker styled the mini with an old-school sneaker that just so happens to have cool-girl Chloë Sevigny's stamp of approval as well. A pair of classic leather Reeboks, which first appeared on the scene in the '80s, acted as the grounding element, but the throwback aspect isn't the only reason they're worthy of mention. The trainers were quite an unexpected style move, but as per usual, Bosworth made it work — and she's bound to inspire many to test drive the combo this summer.

No look is complete without a handful of smart additions, as Bosworth knows very well. She topped off her off-duty outfit with two pieces reigning supreme in the accessories world — a chic leather belt bag (which she chose to wear as a crossbody) and a pair of thin-rimmed sunglasses that added just the right amount of edge.

Although you might be eager for sandal season, the actor's getup proves sneakers are a year-round staple that can easily be worked into your warm-weather wardrobe, too. What's more, it demonstrates the sporty shoe pairs exceptionally well with a feminine mini dress.

So grab your wallets and shop The Zoe Report's roundup of the best dress-and-sneaker pairings to try right now, below.

Meet the LBD you'll be wearing nonstop this season. It's cut from a sleek black satin and features bold balloon sleeves that are just so fun. Keep it casual by pairing it with streamlined sneakers.

Cop Bosworth's exact sneakers without spending more than $75. Then, wear them with dresses, distressed denim, or leather mini skirts this summer — the options are endless.

This denim dress strikes the perfect balance between casual and chic. Pair it with chunky pale-pink kicks and a neon-hued belt bag for a day of shopping.

Already own too many white sneakers? Try these pale-pink trainers, instead then. They're buttery soft, have the perfect chunky sole, and are so versatile. Plus, they're on sale right now.

Ease into the puff sleeve trend with this Reformation midi dress. The shoulders certainly have volume, but not quite as much as Bosworth's.

Converse Chuck Taylors will always pair well with dresses, whether a mini, midi, or maxi. This updated style features a chunkier sole and a more durable canvas.